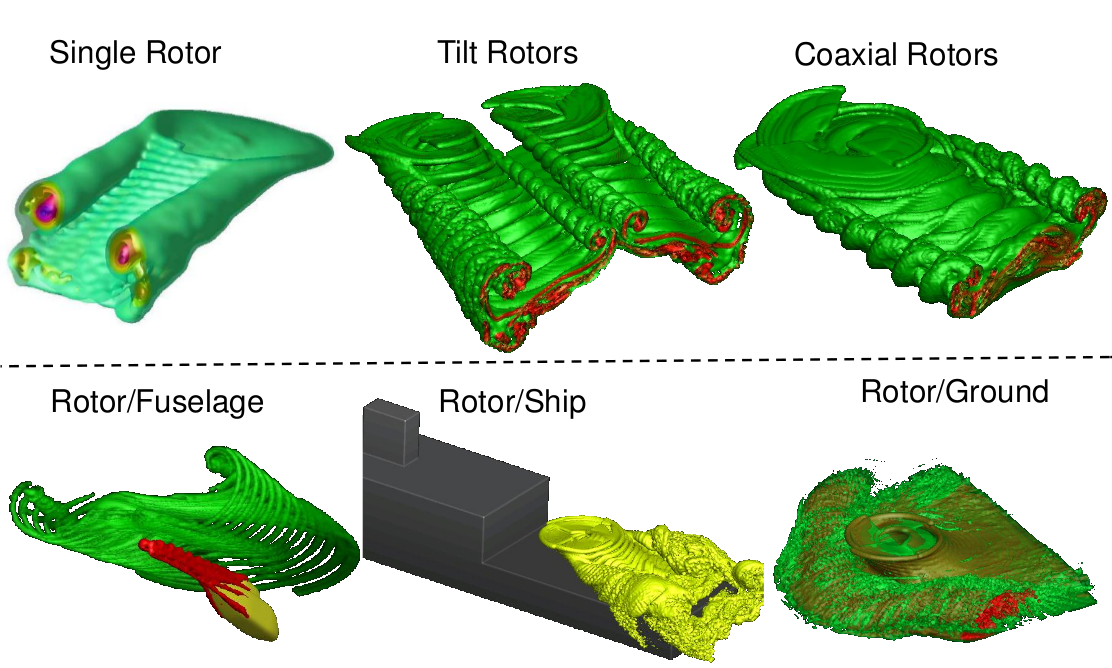 Most recent work has focused on the US Army’s Future Vertical Lift (FVL) programs and commercial electric vertical takeoff and landing (eVTOL) initiatives. ART president Dr. Ronald Du Val explained, “both Future Vertical Lift and eVTOL rotorcraft use transformative configurations with multiple rotors, propellers, ducted fans and wings. The interactional aerodynamics produced by these multiple wake sources significantly affects the rotorcraft loads, vibrations and aeroelastic stability.” He observed, “You don’t have as much of an interference problem when you deal with one main rotor, one tail rotor.”

FLIGHTLAB provides three levels of models for conceptual design, detailed design and flight simulation. Modeling typically starts with the geometry and mass properties of a conceptual rotorcraft and aerodynamic tables to describe rotor or propeller blades and fuselage aerodynamics. “Sometimes we don’t have that, so we take the geometry of the blades and fuselage and generate the tables ourselves from CFD,” said Du Val. Control systems can be input as a block diagram. “If they’ve got control systems already designed, they give us the design. Otherwise we can design the control system for them.”

Conceptual design customers come away with FLIGHTLAB models able to perform basic stability tests and “fly” at different speeds, altitudes and weights to see if the notional aircraft meets their stated mission profile. “Initially, what they need is a model that can be run through a series of conceptual design tests,” he explained. “If they’ve got a mission profile they want to design to, initially, we create a baseline model which assumes rigid blades.”

Detailed design models use coupled CFD and CSD codes to evaluate aeroelastic stability, loads and vibration. “We can actually compute the aeroelastic stability of the aircraft and get a good indication of the aero loads applied to the structures,” observed Du Val. ART tools have the ability to simulate multiple rotors with variable RPMs.

Modeling wakes from multiple aerodynamic surfaces is especially important for eVTOL aircraft, said Du Val. “When you put electric motors under every rotor, you have distributed lift, distributed propulsion. We can put any number of rotors in a model. Current configurations being modeled include up to 18 rotors. What we have to do, in addition to modeling multiple rotors, is model their interaction with each other and with the wings and the fuselage to get the comprehensive model.” Du Val added, “When you have that many rotors, you have them connected on beam or truss structures, usually small to keep weight down. It’s important to model the structural aeroelasticity to avoid aeroelastic instabilities.”

FLIGHTLAB models can be built with their own run-time system interface for real-time simulations that test flight control computers and other hardware in the loop. New systems can be tested and refined before they are installed on an aircraft. High-fidelity models can also improve pilot training simulators. The physics-based modeling approach to rotorcraft flight dynamics has been successfully applied and validated for use in high-fidelity simulators for the US military including those in the Army’s Flight School XXI syllabus. The ART simulation qualification tool (SIMQT) is used to validate FLIGHTLAB models; it “flies” simulated tests and plots the model results against test data. It has been used extensively in testing pilot training simulators.

In the Tool Box
ART has 14 engineers skilled in rotorcraft structures, aerodynamics, control and propulsion. Three computer scientists specialize in software development for modeling, simulation and graphical user interfaces. The team includes 10 PhDs and two VFS Technical Fellows, Dr. Hossein Saberi and Dr. Chengjian He. The model-makers draws on a portfolio of comprehensive modeling and analysis tools, some developed jointly with the US Army.

The Second Generation Comprehensive Helicopter Analysis System (2GCHAS) gave designers a comprehensive rotorcraft modeling and analysis tool with a NASTRAN-like finite element analysis (FEA) code in the late 1980s. It was nevertheless limited in maneuvering flight. ART was founded in 1982 and became prime contractor for both 2GCHAS in 1990 and then the improved development, RCAS, in the late 1990s. The US Army released RCAS to government users as a non-proprietary tool for rotorcraft engineering. ART’s commercial FLIGHTLAB modular, reconfigurable code for comprehensive and real-time simulation evolved in parallel and became available in 1990.

RCAS was developed under a Cooperative Research and Development Agreement (CRADA) between ART and the US Army, which has been ongoing for 20 years. “Under the CRADA, ART supports RCAS and, in return, the US Army provides ART with data on Army helicopters that is used to produce detailed models,” explained Du Val. “They also provide us with flight test data that is used to validate the data.” ART now has models of most US Army and Navy rotorcraft. The company continues to enhance RCAS and support government-authorized users under the continuing CRADA. Under a separate small business innovative research (SBIR) contract, the company also developed GRCAS, an RCAS graphical user interface offered commercially to government-authorized users.

Both the government-authorized RCAS and commercial FLIGHTLAB codes model rotorcraft dynamic response, loads, and structures, but have different applications and advantages. The FLIGHTLAB user interface supports both flight dynamics and loads analysis but focuses on flight dynamics. In addition, FLIGHTLAB supports real-time operation and provides selective modeling fidelity. Users can customize models to balance the computational efficiency with the required fidelity of the model.

RCAS typically focuses more on loads and structures. In flight tests, the agile RAH-66 Comanche scout-attack helicopter suffered from a regressing main rotor lag mode in high-G turns. Dr. Du Val recalled, “Running RCAS with an aeroelastic model of the vehicle predicted the instability of this mode around the same condition as the flight tests. A lag-regressing mode controller was first added to the RCAS model and subsequently flight-tested to confirm the solution.” Today’s GRCAS — with its easier-to-use graphical user interface — is preferred by most customers.

FLIGHTLAB, RCAS and GRCAS share a numeric solution technique and a library of modeling components and system templates to eliminate programming in most applications. FLIGHTLAB users choose from predefined modeling options and use data entry windows in the FLIGHTLAB Model Editor to create a model. The tools are capable of modeling composite structures and adapt to compound helicopters, multicopter and advanced tiltrotor configurations. FLIGHTLAB models of Army and Navy helicopters are typically used to model handling qualities and have improved the fidelity of training simulators. Army engineers at Redstone Arsenal used a FLIGHTLAB model of the UH-60M in the Black Hawk Aircrew Training (BHAT) simulators.

ART also developed the Viscous Vortex Particle Method (VVPM) to generate comprehensive wake models with more efficient computing. This non-grid Navier-Stokes based method models wake interactions accurately and efficiently. It can be used to generate analysis data points in a few minutes on a desktop computer, so it is well suited for design and engineering analysis. VVPM is particularly important to the modeling of multi-rotor configurations due to the intense interactional aerodynamics.

Du Val said that ART puts 25% of its annual revenue toward internal research and development to advance the capabilities and fidelity of rotorcraft modeling: “Major areas of research and development that ART is pursuing include enhanced eVTOL and next-generation rotorcraft modeling technology, advanced CSD/CFD coupling methods and parallel processing of comprehensive models to take full advantage of large computer clusters.” The computer model maker is also working on improved acoustic models to help design quieter rotorcraft and on loads/fatigue analyses for “zero-maintenance” rotorcraft.

Senior contributing editor Frank Colucci has written for Vertiflite for the past 20+ years on a range of subjects, including rotorcraft design, civil and military operations, testing, advanced materials, and systems integration. He can be emailed at rotorfrank@aol.com.