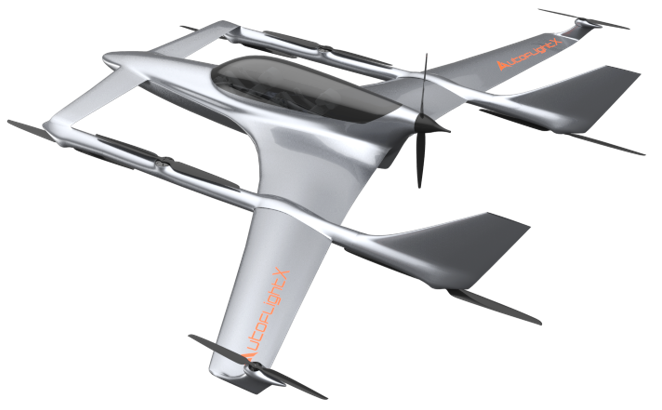 Like the bright blue frames of his trendy spectacles, Dr. Matthias Bittner is cheery. And why not? As chief operating officer of Gilching, Germany-based startup AutoFlightX — a position the 34-year-old aeronautical engineer calls his “first real job in industry” — Bittner is part of a team of fewer than 10 trying to help their company’s Chinese entrepreneur founder, electric aircraft pioneer Tian Yu, change the world through urban air mobility (UAM).

“This is more than a job for me,” Bittner told a visitor to AutoFlightX’s offices in a shiny industrial park abutting Sonderflughafen Oberpfaffenhofen, a private airport roughly 45 minutes southwest of Munich by car.

Air taxi services of some sort using piloted electric vertical takeoff and landing (eVTOL) aircraft could begin as early as 2025 in some cities of the world, Bittner ventured. However, in another decade or so, he expects to see autonomous aircraft carrying passengers around urban areas at inflation-adjusted prices of “around what you pay for a regular taxi nowadays.” AutoFlightX’s vision is a true revolution, said Bittner, who earned a degree in mechanical engineering at the nearby Technical University of Munich in 2010, focusing at first on informational technology, automation and control theory, then got his PhD in aerospace engineering in 2017.

“In the end, we want to provide an aerial mobility solution for everybody,” he said. “This should not be a high-quality premium product finally. In the beginning it very likely will be, because as with every new technology in the beginning there is something exclusive to it and also something a little bit more expensive. But in the long run we really think this can be a technology and a means of transportation for everybody. This is what we want to offer.”

AutoFlightX took its first step in that direction in April, when it unveiled — barely a year after the company’s founding —- a sleek, white, prototype eVTOL airframe called the V600 at the AERO Friedrichshafen eFlight Expo (see, “European Innovation at AERO Friedrichshafen 2019,” Vertiflite, July/August 2019). The name “V600” represents the fact that the vertical lift aircraft’s gross takeoff weight will be under 600 kg (1,323 lb), the European Union Aviation Safety Agency’s (EASA’s) limit for ultralights, making it easier to conduct flight tests.

“This will not be the production model aircraft,” Bittner said. “We do have plans for a production aircraft also, obviously, which will be bigger because two seats are not enough for the market. But this is something we don’t want to talk about right now.” The production model is still in the planning stages and has no name yet, but is projected to weigh in at somewhere between 2,000 to 3,000 lb (900 to 1,360 kg).

“We are currently planning for three to four passengers with a four-seat vehicle, depending on if there is a pilot or not,” he said. “We think in the beginning there definitely will be a pilot, and there are three passenger seats remaining. If there is no pilot involved, then there will be four passenger seats.”

The V600 shown at Friedrichshafen was just a rollout aircraft, currently unready to fly. However, Bittner said in September that the prototype was in a hangar in eastern Europe being prepared for a first flight very shortly. “We are really close right now,” he promised.

The fully-electric V600 has a wing swept slightly rearward and a forward canard, each attached to a boom on each side. For vertical flight, each boom holds three two-bladed lift rotors, each about 2.5 m (8.2 ft) in diameter. One lift rotor sits atop the boom amidships and two are hung beneath the boom, one fore and one aft. Each is powered by its own electric motor. Horizontal thrust will be provided by a smaller pusher propeller, also with its own motor, at the rear of the two-seat fuselage. The pusher propeller is about 1.8 m (5.9 ft) in diameter. After the aircraft makes the transition from vertical to horizontal flight, the lift rotors will lock into place in alignment with the booms. The V600 has traditional control surfaces: ailerons on the wing, elevators at the back of the canard, and rudders on the twin tails, Bittner said, stick and rudder pedals in the cockpit.

With its “classical wings for wing-borne flight,” Bittner offered, the design “can take-off and land like a regular aircraft also, but it’s meant to take-off and land vertically.” Even during a vertical takeoff, landing or hover, Bittner expects the 600 kg (1,323 lb) maximum takeoff weight aircraft to produce only mild downwash and noise.

The V600 “is meant to be a two-seat vehicle,” Bittner noted, “but as I said, this is a tech demonstrator and a prototype aircraft for us, so in this current situation it will only be single person. The second seat is occupied by all our test equipment.”

The AutoFlightX website shows a timeline that has production model testing beginning in 2022. By 2025, the timeline declares, “Our aerial taxis are available for everyday use.”

“Maybe in the first vehicles really operated there will be real pilots,” Bittner said. “At some point there will be something like operators, which don’t need to be very highly trained pilots, but just people trained to particular situations where they can take decisions that automation cannot take. At some point, you can also get rid of these people and then just have the fully automated system. But this will be a process. There will be a lot of testing, research, also testing in operations, to get everything covered to have a safe system.”

AutoFlightX’s Chinese sister company, AutoFlight (no “X”) is marketing a subscale version of the V600 concept. The V24 unmanned demonstrator was displayed at the Experimental Aircraft Association’s AirVenture this July in Oshkosh, Wisconsin (see Vertiflite, Sept/ Oct 2019 for more on AirVenture 2019). In addition to supporting the development of the V600, the V24 demonstrator has resulted in the 8-motor V40 “Great White Shark” unmanned aircraft system (UAS) with a 5-hour endurance on batteries alone (a hybrid-electric version is planned as well), 270 nm (500 km) range, and a maximum speed of 130 km/h (70 km). The V40 has a 16.7-ft (5.1-m) wingspan and weighs 83 lb (38 kg). The company website (in Chinese) is www.autoflight.com.

AutoFlightX is likely to find its first passengers in China, or at least Asia, Bittner said, and not just because its founder is Chinese. (Tian Yu was the founder of the major Chinese drone maker, Yuneec International.)

“We think that the Asian market offers great opportunities, because there are some market entry barriers which are not that high in China and in Asian markets,” Bittner said. “Regulation, for example. The public acceptance, also. People in Asia, big Chinese cities especially, are much more open to such new technologies and new developments. In Europe, for example, there’s always a huge discussion about noise. These vehicles will not be really noisy.” The first cities to see AutoFlightX aircraft might be Shanghai or Hong Kong.

For the future of UAM, safety is the biggest issue and that includes not just the flight worthiness of the aircraft, but the safety of the batteries used to power them. Electric car maker Tesla has suffered battery fires, he noted. “Now this is an aircraft, it’s flying over your head, you have battery technology in there. Will people really accept that this may explode right above your head just due to the battery?”

Statistically, Bittner said, eVTOLs may have to be as safe as commercial airliners. If eVTOLs reach the usage rates he and others envision, the likelihood of accidents will rise exponentially. EASA’s relatively new standards for UAM VTOL aircraft, SC-VTOL (Special Condition for VTOL), require aircraft with “more than two lift/thrust units” for vertical takeoff or landing and built to carry nine or fewer passengers to meet “assurance levels” of no more than one catastrophic failure — inability to safely land — in a billion flight hours. (See “Commentary: EASA Publishes SC-VTOL,” Vertiflite, Sept-Oct 2019)

But one to two decades is a long time in modern technology development, and by the time that many eVTOLs are in the air, Bittner is sure such challenges can be met. “We think this is a journey,” he said.