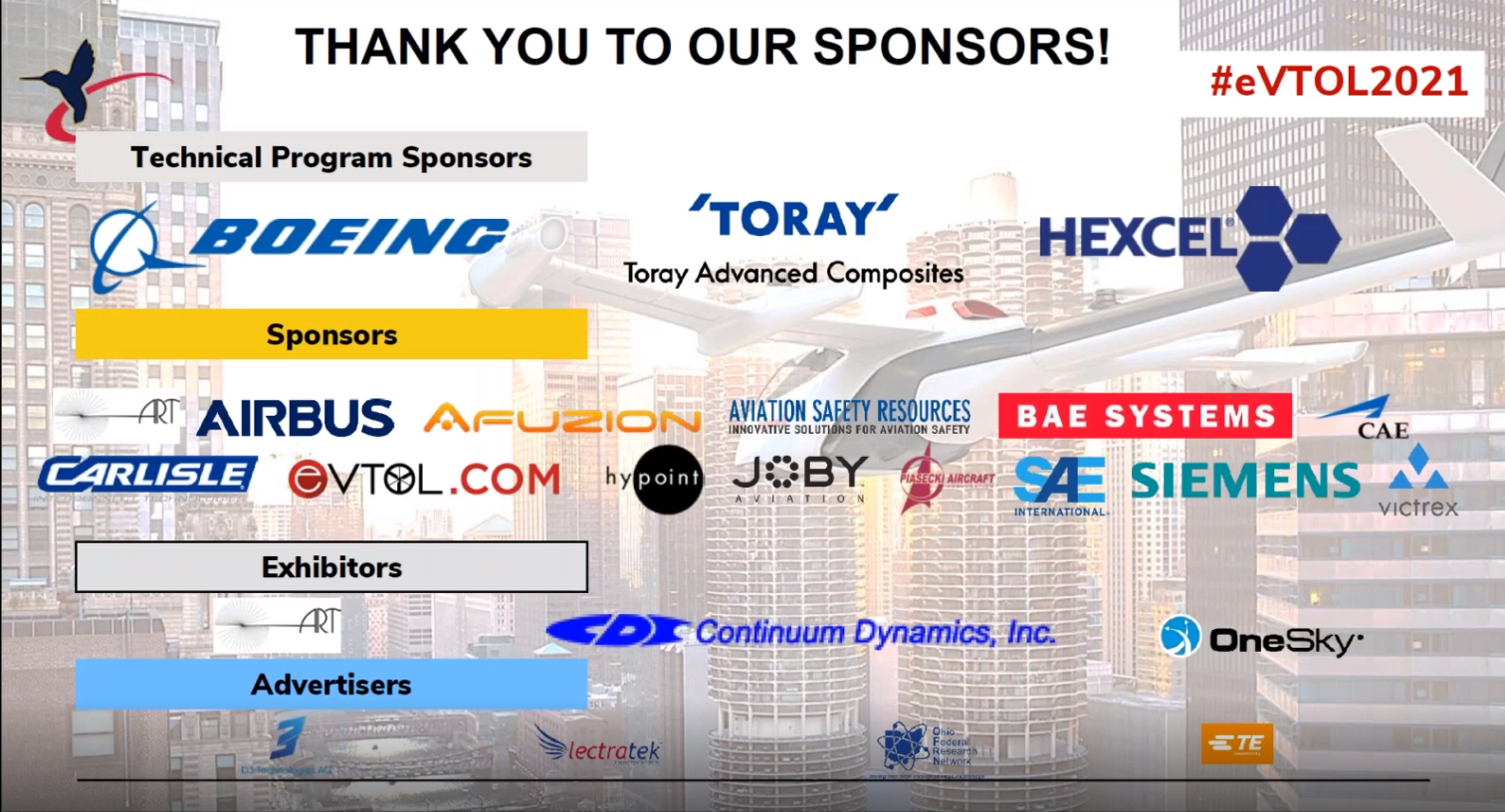 Enthusiasm for autonomous and electric vertical takeoff and landing (VTOL) technology was obvious at first VFS event of 2021.

When the chapter began holding biennial conferences in 2005, the focus was on looking at new unmanned rotorcraft that were then in development. The meeting has now expanded to encompass all levels of autonomy for all types of VTOL aircraft, including unmanned aircraft systems (UAS), more automation in the cockpit for civil and military rotorcraft (e.g. Future Vertical Lift), and electric VTOL aircraft. The program featured nearly two dozen technical papers, as well as several invited presentations.

The concurrent Electric VTOL Symposium featured invited talks that highlighted technology developments that are driving investment in vertical flight aircraft development, including the urban air mobility (UAM) / advanced air mobility (AAM) ecosystem. Correspondingly, the scope of this year’s eVTOL symposium was much broader than in the past, with the addition of speakers on topics such as detailed modeling and simulation, advanced manufacturing, infrastructure, realistic flight training, workforce development, standards activities and investment opportunities, along with VFS’s traditional eVTOL focus on aircraft developments, technology and regulations.

The combined event set a new attendance record for a non-Forum event with 592 registrants, beating the record set in January 2020 by the Transformative Vertical Flight / eVTOL Symposium by more than 100 additional attendees.

VIP Plenary
The combined opening general session featured top representatives from government and industry providing a vision for the future, along with a roadmap on how to get there.

The opening keynote speaker, Robert Pearce, NASA Associate Administrator for Aeronautics, outlined the programs that NASA has underway to advance the airspace, including the agency’s all-encompassing AAM National Campaign. He pointed out that the consensus of several marketing studies is that UAM/AAM will provide a potential market of $320B or more over the next 20 years. Integrating smart cities initiatives with AAM will be driving value for cross-industry innovation to release that potential. A key aspect of AAM is unlocking the airspace through air traffic management and, ultimately, highly automated systems to overcome the complexity and enable scalability. Integral to achieving these goals is the AAM National Campaign, which is “an integrating element” to all these technologies; it is designed as a series of tests over multiple years to demonstrate these technologies and inform standards, policies and community development.

The US Army Program Manager for UAS, Col. Joseph “Scott” Anderson, provided a detailed overview of the US Army’s plans for unmanned and autonomous systems. He provided a detailed roadmap for both vertical-flight and fixed-wing UAS programs. The Future Tactical UAS (FTUAS) platform is intended to be a runway independent Group 2/3 unmanned aircraft that provides the Brigade Combat Teams with an expeditionary, more mobile reconnaissance, surveillance and target acquisition (RSTA) capability.

US Air Force Col. Nathan Diller provided an overview of the AFWERX Agility Prime program and its role in developing the eVTOL/UAM/AAM ecosystem, including reducing financial and technical risk, and establishing a supply chain.

The US Federal Aviation Administration (FAA) Executive Director of the UAS Integration Office Jay Merkle then provided an overview of the FAA’s position on AAM, including high-level definitions. Merkle pointed out that the FAA is working to evaluate all the possibilities for AAM, including recreational, commercial, cargo and passenger applications to meet the market on time. The FAA is working to understand how the “3As of flying” — aviators, aircraft and airspace — are being blurred through AAM. Merkle also confirmed that there are 30+ companies working toward certification, including seven electric engine companies.

On the opening day, the program featured invited presentations from the US Army, Sikorsky, Bell, University of Maryland and Near Earth Autonomy, with Ajay Sehgal (KBR) moderating the session. These speakers set the stage for use-cases in autonomy, highlighted current projects under development, provided insight into how autonomy can improve AVTOL vehicle safety, and explored growing potential applications for AVTOL.

On the final day, Dr. Daniel Schrage (Georgia Tech) chaired the morning session on UAS operations and certification with first an invited technical presentation by Daedalean, followed by paper presentations from the DLR Institute of Flight Systems, Georgia Tech, NASA Ames and Nodein, Inc. Experts discussed challenges in this area such as those associated with the certification of safety-critical avionics, detection of obstacle-free landing zones in crowded environments, and concepts of operations in maritime rescue operations.

eVTOL Developers Making Great Progress
Held in parallel with the technical paper presentations, the annual VFS Electric VTOL Symposium is always a great opportunity for the vertical flight community to measure the progress across the emerging eVTOL industry and associated ecosystem. This year, the mood at the symposium was extremely positive, thanks to a series of public announcements and revelations over the preceding 60 days.

With Joby taking over Uber Elevate’s operations (see “Joby Transitions,” Vertiflite, Jan/Feb 2021), former Head of Elevate Eric Allison — now Joby Head of Product — highlighted how the Elevate program will complement the Joby mission to “save 1 billion people an hour a day.” He detailed the four enabling technologies that need to be created to enable this vision — multimodal operations, electric aircraft, air taxi technologies and connected skyports. Allison also restated some of the lessons learned from the Elevate studies, such as everyday flights require a behavioral change, customer perception of safety is critical, and multimodal integration is difficult but when done correctly “seems like magic.”

Market Insights
NASA’s Parimal (“PK”) Kopardekar moderated a session that highlighted the potential market opportunities for eVTOL/AAM featuring Cyrus Sigari of UP.Partners, Michael Dyment of NEXA Capital, Helicopter Association International (HAI) President and CEO Jim Viola, and Starr Ginn of NASA. Sigari covered details of many aspects of AAM from commercial drone applications, from cargo and medical applications to passenger transport. Sigari reported that the industry has so much potential “that in one week alone, we saw 50 new companies” join the AAM space.

Dyment provided a case study of the Vancouver market for the Canadian Advanced Air Mobility (CAAM) Consortium. The study showed a benefit to Vancouver (which already has a robust helicopter transport industry), with thousands of direct and indirect jobs, and over $1B in gross domestic product benefits. Viola indicated the HAI is now ready to support and foster the AAM industry from the perspective of operators.

Finally, while not a direct market analysis presentation, Ginn provided details of the AAM National Campaign, from evaluating the performance of vehicles in real-world scenarios, to air traffic management technologies and infrastructure design. The goal of the campaign is to evaluate the potential missions, and identify gaps in technology and operations and inform industry, academia and regulatory bodies. The structure of the campaign is a design of experiments (DOE), utilizing the current technologies that are available, and is planned to continue through calendar year 2023.

Enabling eVTOL / AAM
While some of the technologies presented in the program this year addressed updates to key technologies covered in previous programs, including modeling and simulation and advanced manufacturing, new topics addressed emerging needs — realistic training and simulation for flight testing and workforce development. In partnership with ARINC Industry Activities (an SAE International program), one session focused on creating operational scenarios to provide pilots realistic situations that cannot be provided during standard pilot training.

Another session — the Future Vertical Workforce, moderated by Dan Newman — featuring leading industry and academia representatives, highlighted the current state of VTOL education and the needs and changes required to address this upcoming future. The panel determined that it’s not a single change needed but a near overhaul of system, to include cross-functional integration between departments, more hands-on mentoring and adjusting curricula for supporting functions, such as maintenance to meet the needs. Since workforce development is a key VFS mission and a potential talent crisis is forecast (see www.vtol.org/workforce), this session is available to the public at www.youtube.com/vtolsociety.

Throughout the rest of the symposium, speakers and sponsors provided detail on topics ranging from hydrogen for eVTOL, certifying avionics through DO-178 and DO-254, partial electric discharge prevention and crashworthiness certification. VFS thanks all of the sponsors, exhibitors, advertisers and attendees for their continued support of eVTOL Symposium and looks forward to providing future eVTOL events.

VFS Chapter Leadership
Organization and administration of the overall event — and the AVTOL technical program in particular — was supported by many members of the VFS Arizona Chapter, without whom the event could not have been held.

Next January, the VFS San Francisco Bay Area Chapter will be hosting its biennial Transformative Vertical Flight event, including the 9th Annual eVTOL Symposium. It will be held at the Doubletree by Hilton Hotel San Jose, California, on Jan 25-27, 2022. Make your plans to attend and help set another attendance record!