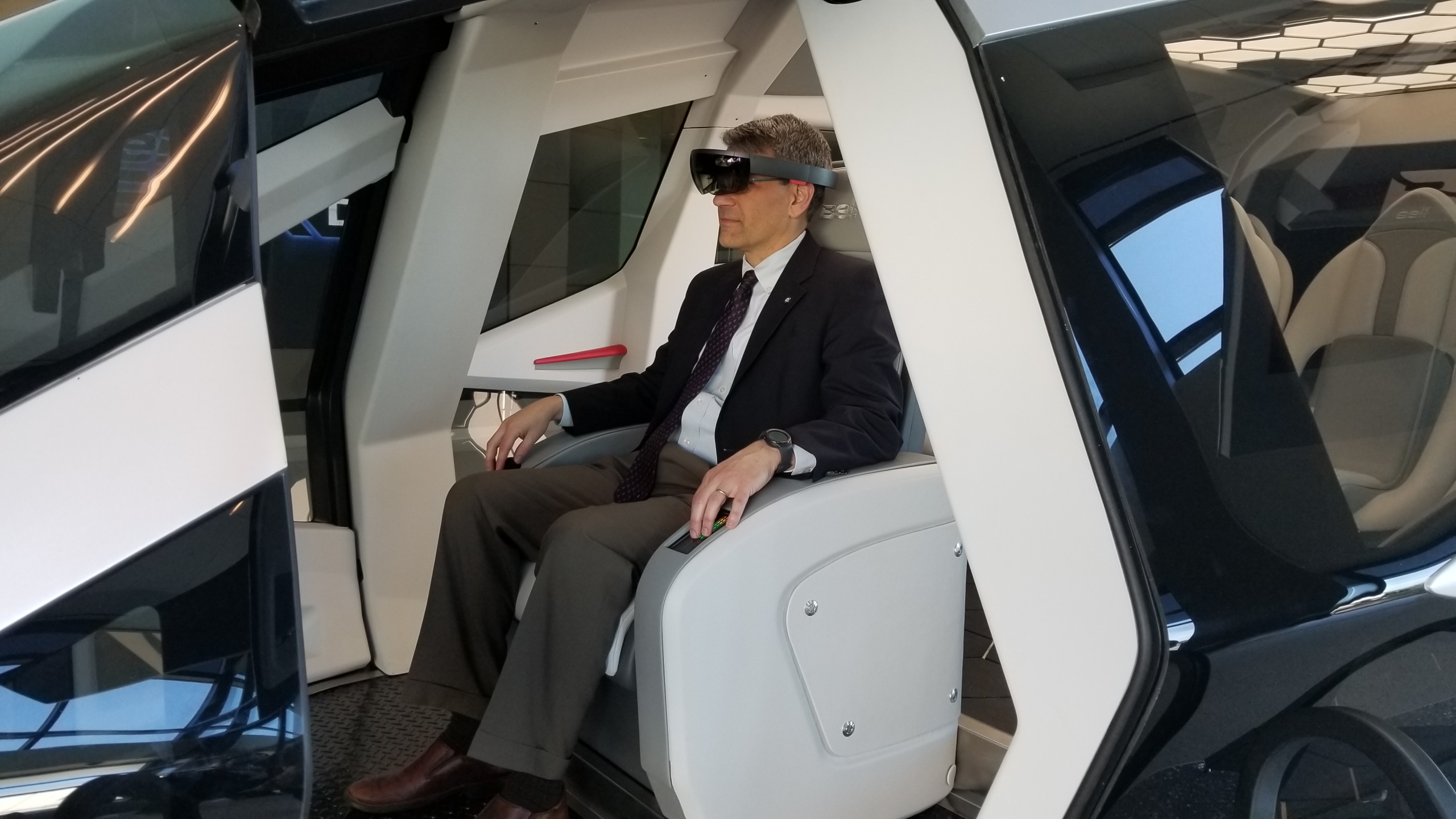 AHS can claim a share of the credit in the development of the V-22 and F-35B, and is working to do the same with FVL and eVTOL.

Seventy-five years ago, on Feb. 25, 1943, 26-year old Edward Katzenberger stood up in a high school gymnasium in Stratford, Connecticut, and called a meeting to order. At that meeting, the participants resolved to establish the American Helicopter Society.

Katzenberger, having joined Sikorsky Aircraft the year before, had been talking with other employees about establishing “The Sikorsky Helicopter Club.” As retold by the first AHS executive, Harry Lounsbury, in the first issue of The Journal of the American Helicopter Society in 1956: “An organization so limited in scope, however, could not be expected to attract and hold the attention of the entire rotating-wing industry, and for this reason, a committee of the above mentioned people was formed to explore the possibilities of an organized scientific society.”

The original articles of association were filed four months later with the state of Connecticut, which legally recognized “The American Helicopter Society Incorporated” on June 25, 1943. In the filing, the founders wrote that the purposes of AHS included “to collect, compile, and disseminate information concerning the helicopter; to hold meetings, lectures, and discussions to present, review and examine matters pertaining to the helicopter; to publish technical papers, journals and records, and to create and maintain a library of information pertaining to the helicopter….”

Over the ensuing years, as the helicopter became more ubiquitous around the world and technological advances such as turbine engines promised increased performance for helicopters and new vertical and/or short takeoff and landing (V/STOL) aircraft, AHS expanded its scope. Already by 1956, Lounsbury used the term “rotating-wing” rather than “helicopter” in his statement above, and concluded his retrospective on the history of the 12-year-old AHS with these thoughts:

Needless to say, through the years the Society has taken many steps in furthering its purpose in life; namely: "the dissemination of technical and non-technical information to the rotating wing industry." It is my belief that a long and prosperous future lies ahead for the organization due to the ever-increasing interest in its activities shown not only its own membership but by industry and the man on the street as well.

In addition, Lounsbury noted that the Society had grown to 1,500 members in its first dozen years and was “also fortunate in numbering many engineers and executives from abroad. Included are such countries as: Australia, Bolivia, Canada, Chile, Colombia, England, France, Germany, Guatemala, Holland, Ireland, Japan, Mexico, New Zealand, Switzerland, Sweden, and Venezuela.”

Following the trajectory implicit in the changes between Katzenberger’s contemporaries in 1943 and Lounsbury’s statements in 1956, the Society has expanded and tweaked its scope and vision over the years, but has continued to support the global advancement of vertical flight — aircraft that harness the lift and/or thrust of rotating airfoils for vertical takeoffs and/or landings. The continual reflection on the scope of membership and domain of interest of the Society has resulted in many changes over the ensuing decades, culminating in 1997 when we started going by “AHS International — The Vertical Flight Society.”

More information on the establishment of AHS and retrospectives on the incredible legacy and accomplishments of the Society can be found at www.vtol.org/history.

The members of the vertical flight technical community — individually and collectively — have made incredible contributions over the decades, with an astonishing legacy of accomplishments in advancing vertical flight. Through successive generations, the industry has moved from blades of wood to aluminum and composites. Pioneering advances in understanding unsteady flow aerodynamics and developing computational fluid dynamics tools have resulted in ever-more-efficient performance in hovering and forward flight. Leaps in propulsion system power-to-weight, specific fuel consumption and reliability have powered successive generations of aircraft and enabled new configurations and capabilities. Many other technologies — from the cockpit and controls to transmissions and counter-torque options — have revolutionized the efficiency and effectiveness of vertical flight aircraft.

We did this — individually as engineers, scientists and innovators, and collectively as members of the vertical flight community. Through the decades, AHS — with the Annual Forum and our many other conferences, publications and networking opportunities — has been the primary means for sharing information and ideas, and working together to advance vertical flight. AHS has brought together young engineers and scientists in industry, academia and government with the world’s leading technical experts for 75 years.

Research by industry, academia and government organizations promised step changes in helicopters, advanced rotorcraft and V/STOL aircraft, and scores of innovative propulsion system approaches were tested during the “Golden Age of V/STOL” between 1950 and 1975. In the 1970s, AHS recognized this expansion of interest from the vertical flight technical community beyond rotary-wing aircraft and renamed our event to the “Annual V/STOL Forum” for several years.

Through the development and flight testing of dozens of V/STOL aircraft — and exploration of hundreds of other concepts that never took flight — the vertical flight community explored the technical, practical and economic pros and cons of non-helicopter configurations. During the 20th century, more than 45 different configurations of powered lift — from advanced rotorcraft to jump jets — were evaluated for their viability in combining the vertical takeoff and landing capabilities of a helicopter with the high-speed forward flight of a fixed-wing aircraft (see www.vtol.org/wheel).

Over the years, we have changed the world. In addition to our contributions in helping to establish and foster the advancement of the helicopter industry, AHS can claim a share of the credit in the development of operational V/STOL aircraft.

Though controversial for many reasons, both the V-22 Osprey tiltrotor and the V/STOL F-35B Lightning II owe some of their existence to the efforts of AHS. In addition to supporting the development and advancement of the helicopter, AHS was a leading advocate for military and civil tiltrotor technology, beginning in the 1970s. The 400,000 flight hour milestone that the Osprey recently achieved is a testament to the perseverance and leadership that saw the program through its early troubles. The capability engendered by the groundbreaking propulsion approach of the tiltrotor has made the V-22 the most in-demand aircraft in the US Marine Corps. Perhaps no other organization besides the Marines, Bell Helicopter and The Boeing Company did more to support the successful development of the V-22 than AHS.

Similarly, in the 1990s, AHS was a major supporter of the nascent Joint Advanced Strike Technology (JAST)/Joint Strike Fighter (JSF) program that resulted in the V/STOL F-35B Lightning II. With day-long symposiums held for the JAST/JSF Program Office — and AHS corporate members featuring their competing concepts at multiple AHS Annual Forums — AHS helped lend credence to the technical possibilities of a stealthy supersonic strike fighter with a unique propulsion system that enabled hovering and vertical landings. Today, there are more than 250 operational F-35s flying from 14 bases around the world, including scores of V/STOL capable F-35Bs.

Since the late 1990s, AHS has provided a platform for meetings and dialogues on establishing a joint, next generation military rotorcraft development program, which has resulted in the Future Vertical Lift (FVL) program. The Society's testimony to Congress in 2003 and 2005 struck upon numerous themes that would later be incorporated into the FVL Strategic Plan. AHS promoted the creation of the Congressional Rotorcraft Caucus in 2001, and worked with the Caucus to augment Congressional funding of rotorcraft research at NASA. In 2008, AHS worked closely with the Caucus and our industry members and advisors, and succeeded in adding Section 255 to the 2009 Defense Authorization Bill, which essentially directed the creation of FVL. Investment of more than $1B by industry and the Pentagon is now bearing fruit in demonstrating next generation rotorcraft harnessing the latest technology and high-speed propulsion architectures. AHS is proud of its contributions toward shaping the future of vertical flight.

Now, a potential fourth transformative propulsion capability is before us. Like the V-22 and F-35B, it is highly controversial. Proponents believe that electric vertical takeoff and landing (eVTOL) technology holds the promise to revolutionize flight with aircraft that are faster, lighter, safer, quieter, cheaper and greener. As with the early vision for the Osprey and the Lightning, the hoped-for benefits are tremendous, but attaining economically compelling operational electric or hybrid-electric vertical flight aircraft will require working together to overcome the significant barriers — regulatory, environmental, economic, infrastructural, cultural and others — that make eVTOL seem like an impossible dream to many. Just like with the tiltrotor and the supersonic jump jet, it won’t be easy, and will likely take far more time and effort than proponents believe, but it seems inevitable that eVTOL will provide a transformative vertical flight capability in the not-too-distant future.

(For more insights into the history of advanced vertical flight within AHS, see the “Commentary: Not Just Helicopters,” Vertiflite, July/Aug. 2017.)

Over the past several years, the AHS International Board of Directors has continually increased the Society's emphasis on a much broader outreach strategy, embracing professionals worldwide and technologies beyond traditional rotorcraft. Significant changes to the Board and our membership policies were enacted to in 2013 to support the strategic vision of being “An international organization that advocates, promotes and supports global vertical flight technology and professional development.”

Two recent surveys provided additional insights into our members’ perspectives on the future direction of the AHS to best position ourselves for growth in the years and decades ahead. Respondents have been generally supportive of the broader vision (see www.vtol.org/name).

AHS International now looks forward to building upon our incredible legacy as we continue to advance vertical flight for another 75 years and beyond.

What do you think? Let us know at director@vtol.org