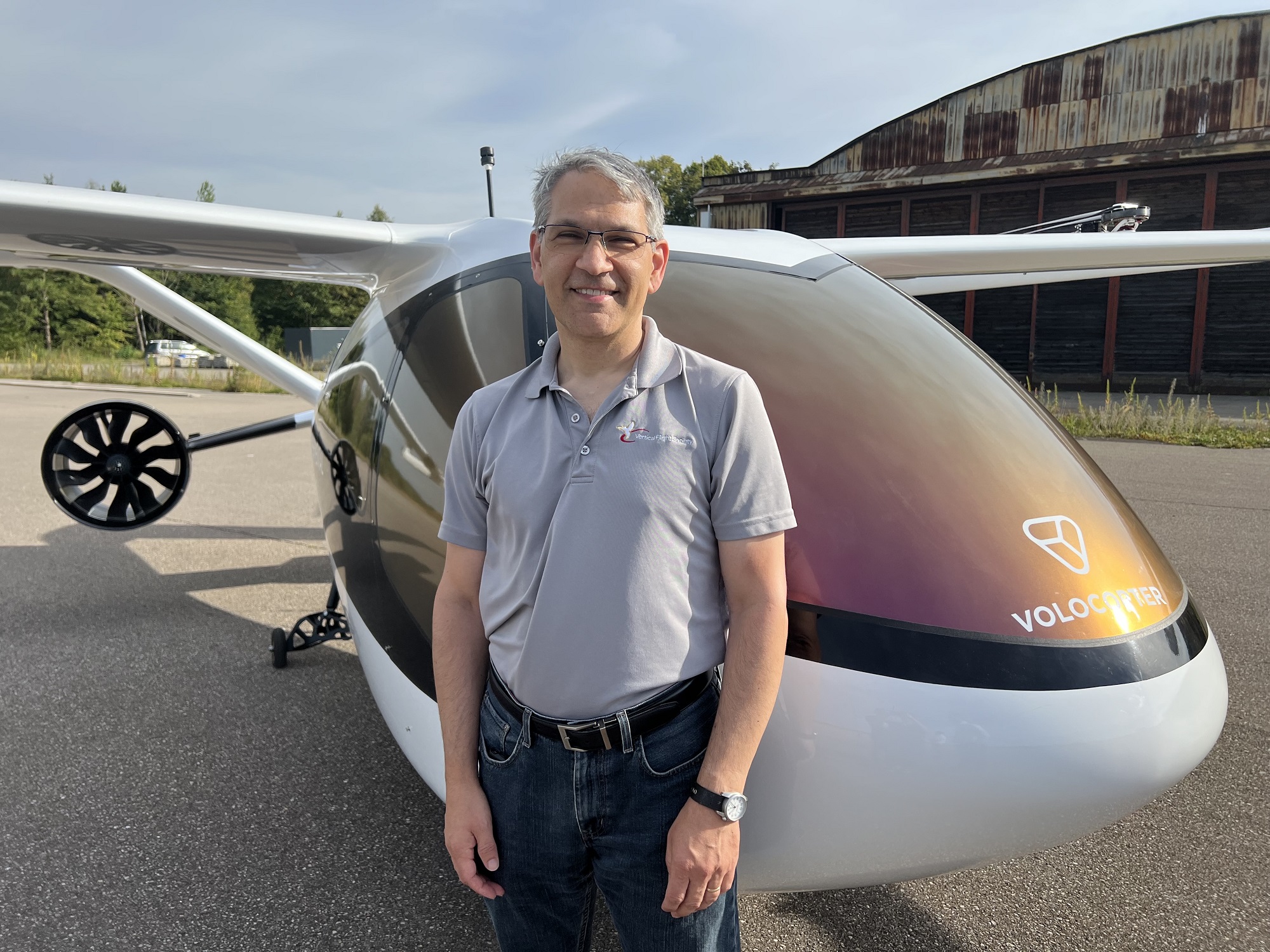 Whereas associations and other groups talk about the “helicopter industry” and the “vertical lift industry,” the Vertical Flight Society — a technical, educational non-profit — is here for the “vertical flight community.” We are not a trade association or a business league. We are the community of individuals, universities, companies and other organizations focused on the mission of advancing vertical flight.

There are no minimum requirements or qualifications to join VFS. We are a professional society where everyone who has an interest and passion for the science and technology of vertical takeoff and landing (VTOL) aircraft and related fields is welcome — and hopefully made to feel welcome as well.

When I was a young engineer in the 1990s, what attracted me to what was then called the “American Helicopter Society” was the openness, friendliness and encouragement of the Society’s members and staff. At the time, I felt like I was just some dumb kid who didn’t know anything about helicopters — I was working on the Joint Strike Fighter (JSF) propulsion system developments at the time — but fell in love with our members and the uplifting community.

The Society has always had a “big tent” philosophy: everyone was welcome, not just “American helicopter” engineers and scientists. It changed the name to “AHS International” in 1997 — with the tagline, “The Vertical Flight Society” — to emphasize that the Society welcomes everyone around the world who is interested in vertical flight, including tiltrotors, fixed-wing VTOL and drones. That tagline officially became our name in 2018 and we doubled down on this inclusive outlook.

My first exposures to “AHS” inspired me to get more involved then and continue to propel me today. It’s that feeling of being welcomed that I hope all of our members not only feel themselves, but help to promote with their colleagues, other VFS members and others in the vertical flight community, to help engender this sense of belonging. VFS is the home for everyone.

VTOL Is Hard
I published my first ever article in the March/April 1997 issue of Vertiflite. The 20-page “V/STOL: The First Half-Century” included my update of the wheel of “V/STOL Aircraft and Propulsion Concepts” (www.vtol.org/wheel), describing the 45 vertical and/or short takeoff and landing (V/STOL) aircraft that had been built and tested to combine the vertical flight capabilities of a helicopter with the efficient cruise of a fixed-wing aircraft.

Around 1999, I gave a lecture at the University of Maryland on the V/STOL Wheel. World-renowned helicopter pioneer Prof. Alfred Gessow commented that there was never a mission where V/STOL made sense. I replied that the US Marine Corps disagreed.

Despite 50 years of developments, only the Harrier and the Soviet Yakovlev Yak-38 “Forger” had reached operational status. However, two controversial programs were underway at the time, the V-22 Osprey and JSF — now the F-35B Lightning II — which were declared operational in 2007 and 2015, respectively. Despite significant development issues, both have since been highly successful in service.

Similarly, today’s novel configurations of electric VTOL (eVTOL) aircraft for advanced air mobility (AAM) missions face similar headwinds. When we first realized the transformative vertical flight capabilities of eVTOL in 2013, I would tell our members, “Based on everything you know, it’s impossible [for eVTOL to be successful]. But based on everything you don’t know, it’s going to happen.” Some of this, of course, was bravado, but after a decade of work, all the pieces are coming into place that should make the “Electric VTOL Revolution” successful.

The tireless efforts of many of the early startups and additional well-funded companies have resulted in dozens of large-scale flying demonstrators, and inspired hundreds of new companies and innovators. More than 700 eVTOL designs are now cataloged in our definitive World eVTOL Aircraft Directory (www.eVTOL.news/aircraft) with an average of one new concept added every other day.

While it’s great that transformational vertical flight has inspired hundreds of innovative ideas, not all are backed by a solid grasp of physics, certification requirements, market needs and business plans. To paraphrase a well-known meme (misattributed to John Wayne): “VTOL is hard, but it’s harder if you’re ignorant.”

But instead of dismissing all of these designers as starry-eyed dreamers, we should apply the same rigor as used in VFS meetings for technical paper presentations and most organizations for design reviews, etc. I often hear VFS members comment after a presentation with gentle comments like, “That’s a good start, but have you looked at A, B and C?” or “You should consider X, Y and Z.” That’s what a community does when it’s welcoming and interested in advancing vertical flight.

Too often we see dismissive commentators or snarky comments on social media. Let’s not be them. Let’s be affirming and supportive, and give critiques, not snarky criticism.

Professionalism
The pandemic, remote work and increasing online and physically disconnected interactions with faceless — and sometimes nameless or anonymized — individuals have reduced our professional and civil interaction skills. The hyper-polarization of politics and the cacophony of social media and the news media exacerbate the “us” and “them” divisiveness.

Our journal editors have started receiving unprofessional comments back from authors who disagree with their reviewers’ assessments. Sometimes these are even ad hominem attacks. That’s inappropriate and uncalled for in professional engagement. Perhaps in an attempt to convey strongly held convictions, the author thinks that they are still in a gray area, but they are not.

Unprofessional comments and negative behavior cause additional friction and entropy in society. We all should aspire to be the most positive contributor possible to our community, to be inspirational for our coworkers, current and potential colleagues, and the future vertical workforce.

We have a lot of disruptive ideas that can be considered and explored, and it is completely appropriate for probing technical discussions, but please maintain your professional decorum — be the lift that moves vertical flight forward, rather than dragging others down.

Workforce Inclusion
Over the past decade, advances in military and civil VTOL aircraft, technologies and approaches have led us here today, to what may be the most exciting time ever in vertical flight. Billions of dollars, euros, yuan, etc. are going into the development of advanced vertical flight aircraft, including the US Army’s Future Vertical Lift, the European Union’s Clean Sky 2 demonstrators, commercial rotorcraft, eVTOL/AAM programs, uncrewed aircraft systems (UAS), etc.

One of the defining challenges of this transitional period of vertical flight is the future vertical workforce. Scores of companies around the world are hiring dozens or hundreds of engineers and others in what has been dubbed a war for talent.

VFS has written a series of articles and Vertiflite Commentaries and conducted two studies on the subject (see www.vtol.org/workforce). Key takeaways are that the current talent pool is too small and the talent pipeline is not producing vertical flight engineers fast enough to meet demand.

One way to help ameliorate the shortfall is by purposefully working to create more inclusive environments (see “Changing the Face of the AAM Industry,” Vertiflite, March/April 2022). Aerospace is one of the least diverse industries in the US — approximately 88% of aerospace engineers in America are men. Top US engineering schools struggle to approach 30% women entering undergraduate student bodies, and it goes downhill from there. Similarly, 72% of aerospace engineers are white, compared to 61% of the population. VFS has a number of programs under our DiversiFlite initiative (www.vtol.org/DiversiFlite) but we need everyone’s help in providing a welcoming environment.

There is a huge gap in missing engineers — those who have been discouraged or excluded from pursuing (or remaining in) careers in engineering. Engineers are trained to look at the world and see problems that need to be solved and opportunities for improvement. We should apply the same approach to human resource issues.

The VTOL community is successful when we bring together a diversity of minds and attract the best talent.

One of the outcomes of the COVID-19 pandemic is that it caused employees to rethink their careers, work conditions and long-term goals, resulting in the “Great Resignation” (aka the “Great Reshuffle”). Let’s be a community of choice for those wanting to join — or remain — in vertical flight.

Uplifting Our Community
VFS invites everyone to join the Society and help build the future. People of all skills, interests, backgrounds, races, ethnicities, genders and identities are welcome. Let’s all work together to grow our community through uplifting outreach and affirming engagement.