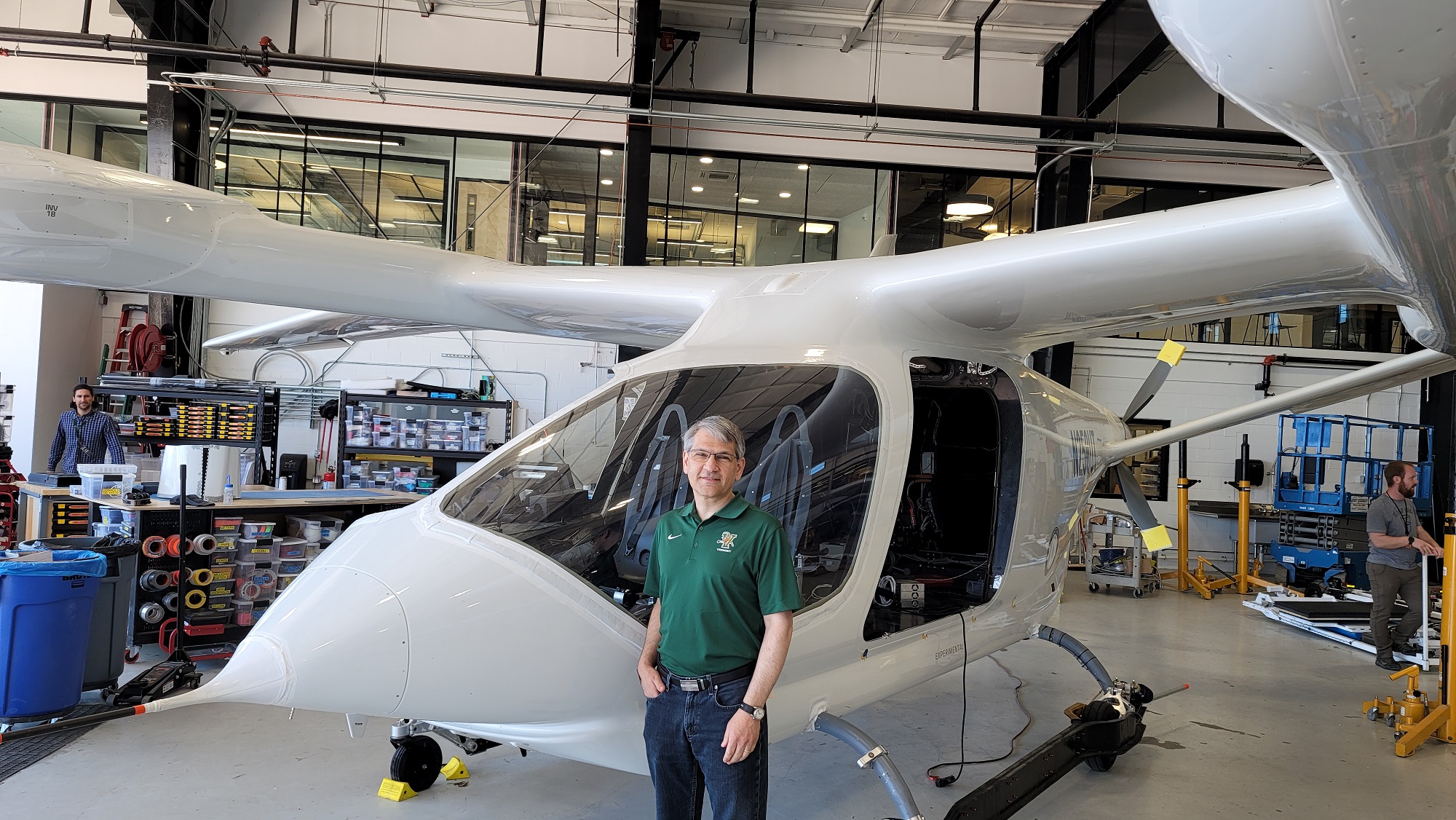 Much has been said and debated about diversity, particularly in the US over the past year. While this is often wrapped up in discussions of discrimination and social justice — very important issues for society to tackle — this commentary is not about that. VFS is only a small cog in the epic wheels of the world’s civilizations and, while “we punch above our weight” and often have an outsized impact, we do that by applying our energies with a laser focus to specific issues where we see the potential to create a tipping point. Diversity in vertical flight is now exactly this issue.

The vertical takeoff and landing (VTOL) industry is experiencing a talent crisis. The influx of nearly $5B for development of electric VTOL aircraft just in the first half of 2021 (see “Turning Point,” pg. 66), has created a war for talent. Large numbers of highly experienced engineers and technologists are being hired away from traditional helicopter companies at the same time that they trying to staff up to meet the demands of the multiple Future Vertical Lift (FVL) programs.

A study by VFS last year indicated that 10,000 additional engineers in vertical flight will be needed over the next decade to meet the simultaneous demands of ramping up development of military rotorcraft plus electric VTOL aircraft (see www.vtol.org/workforce). However, the talent pool is not large enough to meet these demands.

Clearly, for 1,000 additional engineers to enter the VTOL workforce every year, something must be done to increase the pipeline. It’s not just diverting existing engineers to vertical flight, it’s about attracting and retaining as-yet untapped sources.

As discussed in last issue’s Commentary (“Workforce: Winning the War for Talent,” Vertiflite, May/June 2021), there are no easy fixes, but a number of initiatives by industry and government can begin to address the problem. The key aspects of remedies proffered last issue were: increase university funding for VTOL engineering; generate interest in science, technology, engineering and mathematics (STEM) by harnessing excitement of VTOL to increase the pipeline; increase diversity outreach; highlight underrepresented talent to attract potential candidates; and improve inclusivity to retain diverse employees.

The Lack of Diversity in Aerospace

Aviation Week conducts an annual survey of the entire aerospace and defense (A&D) segment, representing 460,000 A&D workers. The “2020 Workforce Study,” released in September 2020, found women comprised 24% of the A&D workforce, compared with 47% of the overall American industrial workforce and 31% in the “Tech” industry. The workforce was identified as 27% ethnic minorities, including 5.9% Black, 7.6% Hispanic and 11.1% Asian.

Notably, the annual survey found slight increases in the percentage of new hires of ethnic minorities, with 8% of new hires being Black and 11% Hispanic, significantly higher than the current percentage of the workforce. However, there was not a noticeable difference in women hiring (remaining at 24%), but the number of women students and young professionals did see a small improvement, to 29%.

The survey results mean that the aerospace community’s years of outreach to underrepresented demographics is having an incremental effect, but there is still a long way to go to before the A&D sector reflects the overall population.

The US has hundreds of years of history to overcome in making the aerospace workforce — and vertical flight in particular — more reflective of its citizens. It will take many years of intentional effort, but combining everyone’s efforts will pay dividends — literally. According to a May 2020 report by McKinsey & Company, “Diversity wins: How inclusion matters,” if a company has at least 30% women in top leadership roles, it will financially outperform its male-dominated competition by 48%.

In addition, a lack of gender diversity can lead to sexual harassment incidences or even toxic work cultures, costing companies millions of dollars a year in absenteeism, employee turnover, low productivity, legal fees and lawsuits. Workplaces that are hostile for women (or any minority) or have a corporate culture of toxic masculinity are often not noticed by the overwhelmingly male population because it often happens to women who are alone or outnumbered. Having a greater percentage of women in an organization — and listening to them — can weed out offenders. Consequences for offensive behavior will help retain female talent, provide a safe workplace and foster inclusion, which is essential for creating a statistical tipping point in diversity.

According to an article by Inc. Magazine in 2018, a US government study found that 60% of women say they experience "unwanted sexual attention, sexual coercion, sexually crude conduct, or sexist comments" in the workplace. Meanwhile, 90% of employees who experience harassment never file a formal complaint; 75% never even complain to their employers. A 2017 Washington Post poll showed that 54% of female employees said they experienced sexual harassment but 95% of the men go unpunished, even though 56% of the men agreed that the sexual harassment was going unpunished. Clearly there’s a problem.

Obviously, for many of the established aerospace companies — with legacies that often stretch back a century — it will take a lot of effort over many years to make a significant change in their workforce. It starts with a vision of diversity, as evidenced by the imagery on the hiring pages of many VFS corporate members, and requires sustained outreach — to diverse employees, minority-serving universities and pre-college STEM support to underserved communities.

However, hundreds of new companies are being started in the burgeoning electric VTOL field, now often referred to as advanced air mobility (AAM). This creates a unique opportunity to build teams that feature a much greater percentage of women in the workforce, and particularly in leadership roles. In fact, a healthy work culture begins with a startup’s “cap table,” which shows a company's equity ownership capital split with the founders and early shareholders. If women are not included early on, a company will likely struggle with diversity when it grows. Moreover, one could argue that it is unethical (or at least unrealistic) for founders to expect hiring managers to solve the diversity problem when they themselves have only hired people who look like them. Corporate culture comes from the top and trickles down, so having a diverse cap table is critical.

Similarly, established and startup companies should look at their executive team. Those without diverse leadership will find it difficult to create a diverse enough environment to foster inclusion and a safe, productive workplace.

One key result of the Aviation Week study was “The ability to recruit and retain the highest quality of talent is critical to the industry.” One of our PhD members noted that she had worked at her new company for three months before she was in a meeting with another woman. Some women in aerospace never get to work with another woman. Women leave aerospace at higher rates than men, but retention can be improved by creating more inclusive workforces.

Nearly every successful team is based on diversity. A soccer team can’t win with everyone playing as forwards, an orchestra wouldn’t be successful by only hiring percussionists, and a design team comprised only of engineers with experience in empennages wouldn’t come up with a very good aircraft.

Diversity of thought is essential to maximize problem solving and creativity. Having different life experiences and different world views are key for innovation. Greater diversity and inclusion can facilitate employees being comfortable in a workplace and engender greater innovation and productivity.

Many startups overlook how critical diversity is. But because companies with women leaders are more financially successful, it has become a competitive advantage, both for recruiting and the bottom line. Many companies are on the hunt for women to lead their teams.

DiversiFLY
VFS is looking at how we can help support the projected hiring demands by promoting diversity in the vertical flight industry through an initiative dubbed DiversiFLY. Danielle McLean, the CEO of Happy Takeoff, is consulting for VFS as the Advisor for Workforce and Diversity. As an aerospace engineer in the industry, she has experienced first-hand the problems that companies face in attracting and retaining talent.

DiversiFLY is an initiative focused on growing the VTOL workforce through diversity, equity and inclusion. We are kicking off a regular series of webinars to discuss challenges, opportunities and lessons learned, in an effort to address the talent crisis in vertical flight.

The subject of diversity, equity and inclusion — not to mention combating sexual harassment in the workplace — is an uncomfortable subject. But we have to get comfortable with being uncomfortable if we want to solve these fundamental issues that are holding back not just the progress of society at large, but vertical flight advancements in particular. It’s not enough to just be not racist or sexist; we need to identify when racism and sexism happen and stop it. We can’t solve inequality and harassment by turning a blind eye — or failing to open our eyes to see what is happening.

In May, I was part of an online discussion hosted by the Canadian Advanced Air Mobility (CAAM) Consortium on Women in AAM. Of the 22 speakers — including two members of the VFS Board of Directors, Chantal Boucher and Anna Kominik, and several other VFS members — I was the only male representative. It was slightly uncomfortable for me, but for gender diversity and inclusion, men need to engage and stretch beyond their comfort zone. Men are the majority of the problem and must be the majority of the solution.

As discussed last issue, addressing the talent crisis requires an “all-of-the-above” approach. The vertical flight community must invest more time and effort into long-term payoffs of increasing the overall production of engineering talent and attract them to the VTOL industry, as well as take the steps necessary to foster diversity and inclusion in the workplace. The only way to win the war for talent is if everyone wins.

What do you think? Let us know!