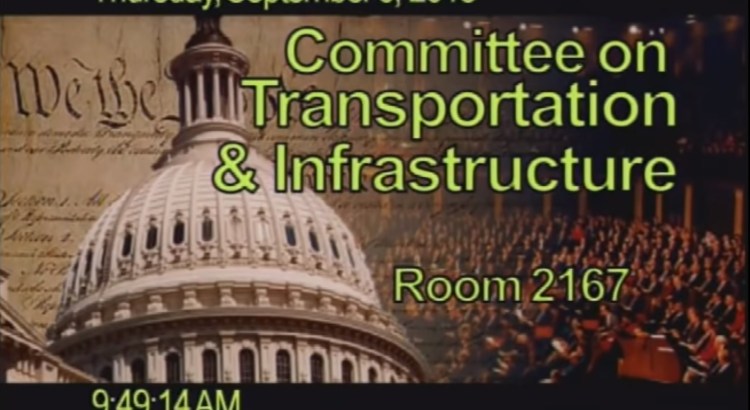 The US House of Representatives’ Committee on Transportation and Infrastructure held a hearing of the Subcommittee on Aviation on “Airspace Integration of New Aircraft” on Sept. 6, 2018.

We are in the early days of a technological revolution that will transform the aviation industry and our national airspace.  In recent years, we have witnessed the growing use of unmanned aircraft, or drones, to improve many different sectors of our economy, including infrastructure, energy, emergency response, and agriculture.  This Committee has met several times to discuss the opportunities and challenges, including regulatory and safety issues, that come with drones.

More recently, we have heard from developers of new “flying car” aircraft.  These aircraft may soon fly commuters and across-town travelers above congested highways, bridges, and roads in our cities.  It was not long ago that flying cars only existed as science-fiction.  These aircraft will carry 3 or 4 people short distances, fly a couple of thousand feet up, and share similar flight technology to drones.  It is an exciting time for the aviation industry in the United States.

Other countries see this potential as well.  For example, at the end of August, the Japanese government convened a meeting in Tokyo that included 21 private companies to develop a plan for introducing flying cars there in the next decade.  This meeting included American and European companies, in addition to Japanese firms.  Companies participating ranged from tech companies and airlines to aerospace and automobile giants that we all know.  And Japan is not the only country embracing this new transportation innovation.  Firms in China are also looking to establish themselves as leaders.  The United States must be active in order to maintain its global leadership in aviation—that means that the Federal Aviation Administration needs to stay ahead of these new technological advancements.

One thing that remains unchanged in the face of these developments is that our number one priority remains—safety.  To both ensure safety and maintain our leadership in aviation, we must systematically address a number of issues.

Today, we begin with how we safely and efficiently integrate new users into the National Airspace System.

Each day thousands of conventional aircraft fly at altitudes that can often be measured in miles, and fly between airports located in many of our communities.  UAS and flying cars will fly at altitudes much closer to the ground, and more often than not operate from places other than airports.

These differences raise at least a couple of initial questions of how UAS and flying cars integrate into the airspace.

First, how will these aircraft physically fit and operate within the three-dimensional airspace and be kept at safe distances from other aircraft, buildings, and people on the ground in urban and other environments?

The second big question relates to air traffic control systems.  Air traffic control of conventional aircraft relies on a number of procedures, including extensive voice communications between pilots and controllers over the radio.  Flying cars and UAS will be far different.  The concept is that highly automated systems on these aircraft will communicate with other highly automated systems on the ground, such as UAS Traffic Management, with less human intervention.  So the question here is, how will the new aircraft and systems interoperate with existing ones and also with each other?

While those are big questions around airspace integration, there are others.  In recent months, we have seen growing interest in more use of counter-UAS systems in the face of an emerging risk posed by unlawfully operated drones.  There are many unknowns about the use of counter-UAS systems which could impact avionics and air traffic control.  Flying cars and lawfully-operated UAS could also be impacted.

Fortunately for us, there are bright and creative people applying their talents to realize the benefits of UAS and flying cars in both the private and public sectors.  This includes efforts being undertaken in my district at the FAA’s premier technical facility in Egg Harbor Township, New Jersey, to advance airspace integration.  We appreciate all of the work that industry and the FAA are doing at the FAA tech center to make safe integration of new aviation technologies a reality.

As this subcommittee continues to look ahead, it is important that industry engage with the Members of this panel.  These are exciting issues and I look forward to hearing from our distinguished panel of witnesses.