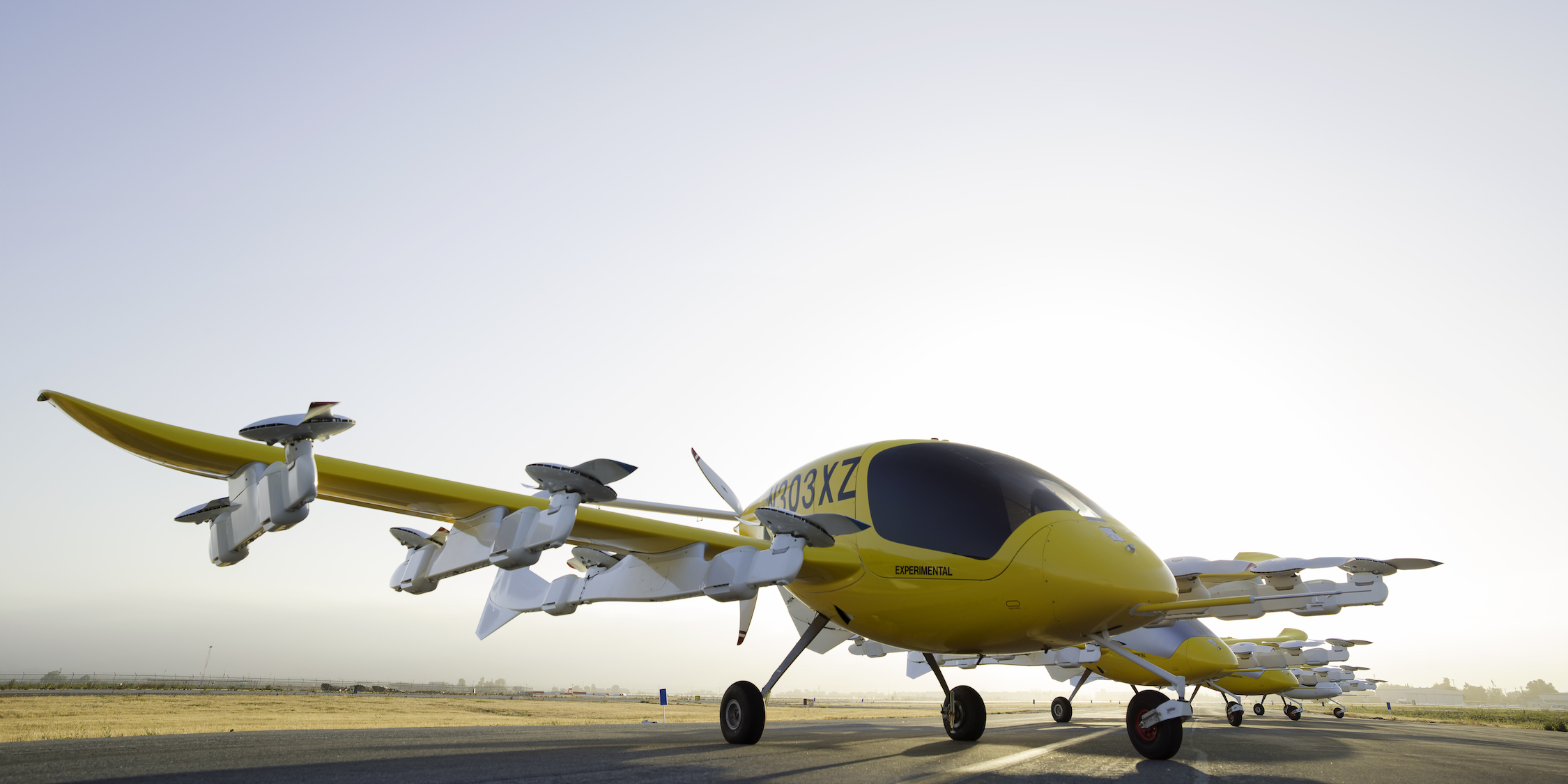 This is quite the remarkable accomplishment for the Silicon Valley technology company, considering that most in the aerospace community didn’t know that this stealth eVTOL program existed less than two years ago.

Cora was first revealed on Mar. 12, 2018, after nearly eight years of secretive eVTOL developments by Zee Aero, which was backed by Larry Page (the co-founder of Google); in 2017, the company was absorbed by Kitty Hawk, another eVTOL company backed by Page.

Zee Aero began in Mar. 2010, originally under the leadership of Prof. Ilan Kroo of Stanford University, and from an early stage focused on the development of innovative aircraft that had wings and a lift-plus-cruise distributed electric propulsion approach.

An unmanned proof of concept aircraft (POC) made its first hover in Dec. 2011 and made its first transition to forward flight in Feb. 2014 but was never publicly acknowledged until Dec. 2017. It featured eight lifting propellers and two pusher propellers.

The POC was followed by a full-scale aircraft designated the Zee Aero Z-P1 (N101XZ) that flew horizontally only. Parts of the Z-P1 were used to build the high-wing, single-seat Z-P2. The design featured eight lift propellers and a single pusher propeller. It made its first manned flight in Hollister, California, in late 2016 and first double transition in Aug. 2017.

Cora development began as a successor to the Z-P2, with the first example (N301XZ, since retired) registered in June 2017 as the Zee Aero “Mule SPA,” with unmanned flight testing begun in the last half of 2017 in Hollister, California; this was soon followed by shipping test aircraft to Canterbury, New Zealand, where Kitty Hawk subsidiary Zephyr Airworks established a test facility. (See “Meet Cora,” Vertiflite, May/June 2018.)

In June 2018, Kitty Hawk signed a partnership with Boeing NeXt to “collaborate on future efforts to advance safe urban air mobility.” On Dec. 2, the companies revealed this partnership as a joint venture dubbed “Wisk Aero.”

As of December, there were five Cora aircraft registered in the US, including two Mule SPA (N303XZ and N305XZ), one Mule SPA-Alpha (N306XZ) and two Mule SPA-Beta (N307XZ and N309XZ), as well as two aircraft in New Zealand (ZK-UZA and ZK-UZB) flying under experimental airworthiness certificates since 2017 and 2018.

Wisk is led by Gary Gysin, the former president and CEO of Liquid Robotics, which was acquired by The Boeing Company three years ago after partnering for two years on the development of advance maritime defense solutions. Liquid Robotics designs, manufactures and sells the Wave Glider, a wave and solar-powered, unmanned surface vehicle that can carry a variety of sensor packages.

Wisk has at least 129 employees (according to LinkedIn in early December) including at least 113 in the San Francisco Bay area, seven in Atlanta and five in New Zealand.

The new leadership team includes executives from Liquid Robotics, Kitty Hawk and Boeing, including Chief Technical Officer Jim Tighe. He held the same position at Kitty Hawk and was previously the chief aerodynamicist at Scaled Composites working on many innovative aircraft, including the SpaceShipOne project.

Kitty Hawk continues to develop eVTOL aircraft under the leadership of CEO Sebastian Thrun, but the product mix is changing.

The first publicly announced aircraft was the Kitty Hawk Flyer eVTOL, which was unveiled in a New York Times story on Apr. 24, 2017; the prototype featured eight downward-facing propellers and a recreational vehicle style seat and handlebars. Further work led to a production version that publicly debuted on Jun. 6, 2018, with a carbon fiber cockpit, internally mounted controls, a roll bar and 10 upward facing propellers mounted on the top of a pair of floats and cross bars.

The original vision was to sell the Flyer as a recreational product for overwater use that anyone could own and fly. Select media and potential customers were invited to a test site at Lake Las Vegas, Nevada, to fly the aircraft as the business case shifted to marketing a Flyer “flight experience” at theme parks, resorts and natural attractions, perhaps to minimize the chances of injuries that would come from individual owners.

However, on Dec. 1, reporter Jeremy Bogaisky broke a story on Forbes.com that Kitty Hawk had returned deposits it received for customers wanting to buy Flyers and it is now focused on developing point-to-point autonomous urban air mobility (UAM) overwater routes for the aircraft. The article revealed that Kitty Hawk applied for a permit in October to establish a floating dock and hangar on Jersey City’s Hudson River waterfront, opposite Manhattan, and is also considering something similar in the San Francisco Bay area.

The article highlighted that the Flyer suffered from reliability problems, “including frequent breakdowns and fires involving batteries, electric motors and wiring,” leading to a renewed focus on improving the integrity of the design.

Under US Federal Aviation Regulation (FAR) Part 103, ultralight aircraft weighing less than 254 lb (115 kg) are exempt from FAA certification and registration requirements (nor could they be used for revenue-generating operations). The prototype and original test aircraft fell into this category and did not need to be registered. However, in 2019, Kitty Hawk reserved at least 82 aircraft registrations with the US Federal Aviation Administration (FAA) for the Flyer, with serial numbers in the F26001-F26091 range, plus higher numbers (e.g. F26100, F26200, F26300 and F26400). This would suggest a heavier Flyer model is in development.

While the Flyer and Cora were capturing the spotlight, Kitty Hawk was also stealthily developing another aircraft that was revealed in October — the single-seat Heaviside eVTOL aircraft. It had been in development for at least two years and flying autonomously for about a year at a secret test site in the cattle country of central California. Heaviside is named after Oliver Heaviside (1850–1925), a self-taught British electrical engineer, mathematician and physicist.

The eVTOL aircraft resembles a single-seat glider, but with eight downward pivoting propellers, two on the canard and six on the 20-ft (6.1-m) long wing. The company stated that Heaviside “is roughly 100 times quieter than a regular helicopter.”

Heaviside general manager Damon Vander Lind was previously chief engineer at Makani Power, which was acquired by Google in 2015, and the new eVTOL aircraft has a surprising resemblance to Makani’s power-generating flying wing kites.

The first two Heaviside aircraft were registered with the FAA in Jan. 2018 (N220HV, serial 001 and N222HV, serial 002) but subsequently upgraded to Heaviside 2 models in Nov. and Aug. 2018 respectively with new serial numbers (H2.001 and H2.002). Registrations were assigned to six more aircraft in May and Aug. 2019 with N221HV (serial H2.2-003) featured in official videos (and the others assigned N223HV–N227HV). No information has been found on the difference between the Heaviside and Heaviside 2 model.

Poised for the Future

With many challenges still ahead, Kitty Hawk is actively seeking more engineers and technicians for the Flyer, Heaviside and (apparently) another stealth aircraft program.

Today’s eVTOL industry was born more than 10 years ago in secret by Silicon Valley companies with no previous background in the aerospace or vertical flight. It’s a testament to the vision and perseverance of development teams at Zee and now Kitty Hawk that they are now in a joint venture with the world’s largest aerospace company — Boeing — to bring eVTOL aircraft to market.