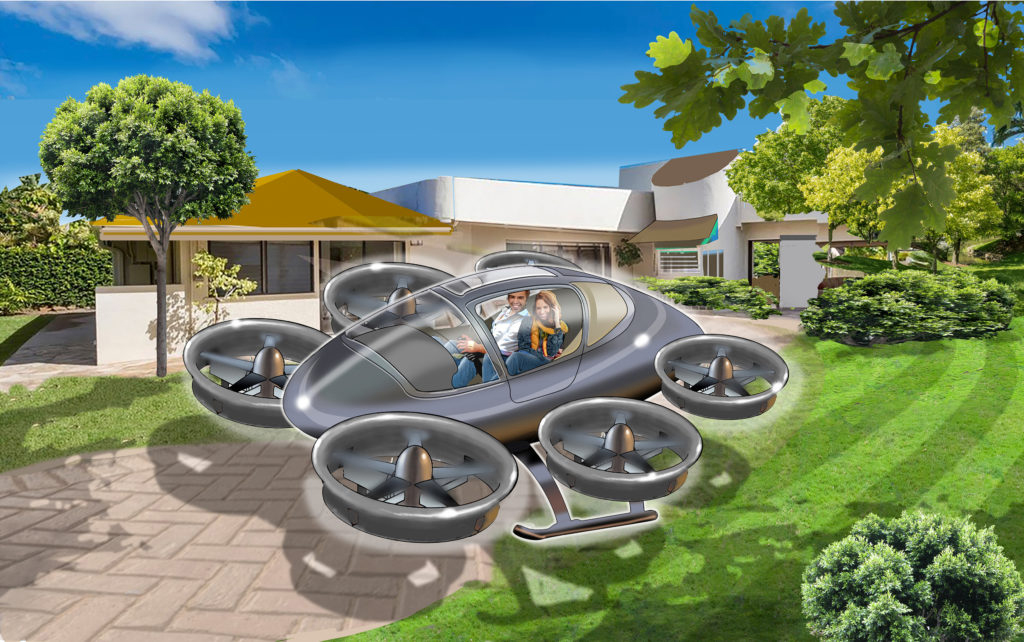 A long-time VTOL designer’s latest startup emerging from stealth development mode has unveiled a hybrid-electric “practical flying car” concept that it hopes to ground- and hover-test next year, culminating nearly 20 years of development including a government contract. Applied VTOL Concepts on May 20 said its one-to-two passenger Epiphany FLYING CARpet would feature twin turbo generators powered by non-explosive diesel or biofuel, fault-tolerant fly-by-wire controls, easy ground maneuverability, and flip-up ducted fans for storage in a standard garage. It is expected to fly at speeds above 100 mph (160 km/h) and have a range of 150 miles (240 km) or more. Founder Michael Moshier said that development of the Epiphany’s ducted fans started in 2001 with his previous company, Trek Aerospace, with $5M in funding from the Defense Advanced Research Project Agency (DARPA). Under that contract and with support from NASA Ames, Trek tested its technology on Moshier’s SoloTrek Exo-skeletal Flying Vehicle (XFV), a single-pilot VTOL personal backpack helicopter, which served as the basis for Trek’s later designs and won Time Magazine’s 2001 Invention of the Year. Trek will develop the FLYING CARpet’s ducted fans under contract to Epiphany. (Sources: Cision PRWeb, TIME, New Atlas)