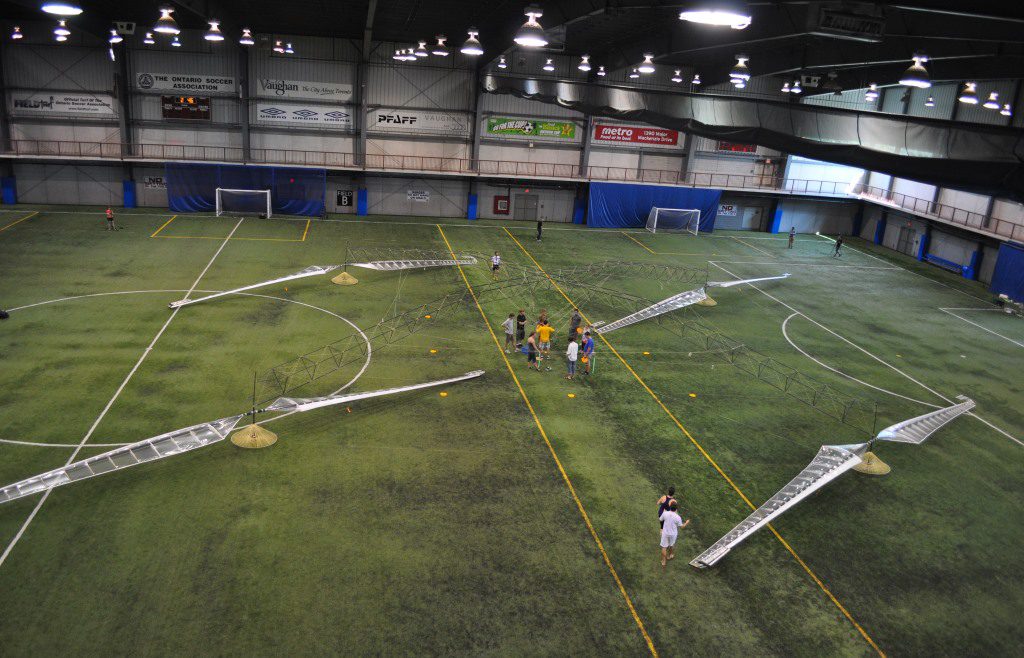 From Aerovelo to Kitty Hawk (sidebar)

Sidebar to Back to Kitty Hawk: Exploring the Secrets of the Kitty Hawk Flyer

While graduate students at the University of Toronto Institute for Aerospace Studies (UTIAS) in Canada, Reichert and Robertson worked with Dr. James DeLaurier on the engine-powered “Big Flapper” ornithopter — an aircraft that generates thrust by flapping its wings like a bird, rather than using a propeller. It achieved its first flight on July 8, 2006.

The idea of developing human-powered aircraft was born in the summer of 2006 when Reichert and Robertson co-founded a student group (later called Aerovelo) to build and achieve the first sustained flight of a human-powered ornithopter (HPO), with Reichert serving as chief engineer and project manager, and Robertson the chief structural engineer.

Reichert stepped up his training to be the Snowbird pilot and “engine,” which required power of 0.83 hp (620 W). On Aug. 2, 2010, at 6:45 am, the Snowbird lifted off for a record-setting flight of 19.3 seconds to become the first successful human-powered flapping wing aircraft.

Next, the Aerovelo team competed in the AHS Sikorsky Human Powered Helicopter (HPH) competition. To win, an HPH had to hover for at least 60 seconds and reach an altitude of at least three meters, with the pilot remaining within the boundaries of a 10-by-10-meter square.

Aerovelo selected a quadrotor design for its inherent stability, the maximum size of its primary structures and the “economies of scale for manufacturing, with four- or eight-instance repetition of the main components (i.e. rotors).”

The endurance and altitude required a very large but very light aircraft, and a very powerful pilot.

Reichert trained continually for more than a year, with flight testing beginning in August 2012. On June 13, 2013, Reichert produced nearly 1.5 hp (1,100 W) for up to 10 seconds and an average power of 1.03 hp (770 W) for more than a minute for Atlas to capture the 33-year-old $250,000 AHS Sikorsky Prize, sponsored by Sikorsky Aircraft. (See “The Atlas Human Powered Helicopter — How We Won The AHS Sikorsky Prize,” Vertiflite, Sept./Oct. 2013 and www.vtol.org/aerovelo for more information.)

After winning the AHS Sikorsky Prize, the Aerovelo team invested some of the prize money to try to build the world’s fastest human-powered vehicle, dubbed “Eta” (the Greek letter, η, used in engineering to denote efficiency). Aerovelo achieved its goal in September 2015 during the World Human Powered Speed Challenge in Battle Mountain, Nevada. With Reichert pedaling, the team’s Eta speedbike achieved a speed of 86.65 mph (139.45 km/h), surpassing the previous world record of 83.13 mph (133.78 km/h) set in 2013 by a team of Dutch students from Delft.

The Eta incremented the world record four times, most recently in September 2016 with an astounding 89.59 mph (144.17 km/h) — faster than any posted highway speed limit in the world (including the German autobahn, which uses 130 km/h, 80 mph, as the top posted speed before the limit is lifted).

With this, Reichert became the world’s fastest man and the Eta speedbike was recognized as “the most efficient form of transportation ever designed” in terms of kilograms of payload per unit of energy. “Based on the measured power input of the pilot, Eta boasts an equivalent highway fuel efficiency of 9,544 MPGe, on the order 100x better than the most efficient electric cars,” said Aerovelo.

Although Reichert and Aerovelo are no longer competing at Battle Mountain, Reichert still holds the top five speed records, since no one else has yet beaten the 2013 Delft team. But the fastest speed at this year’s challenge was 79.30 mph (127.61 km/h), achieved by University of Toronto’s Calvin Moes in a derivative of the Aerovelo Eta, dubbed “Eta Prime” (i.e. η′).