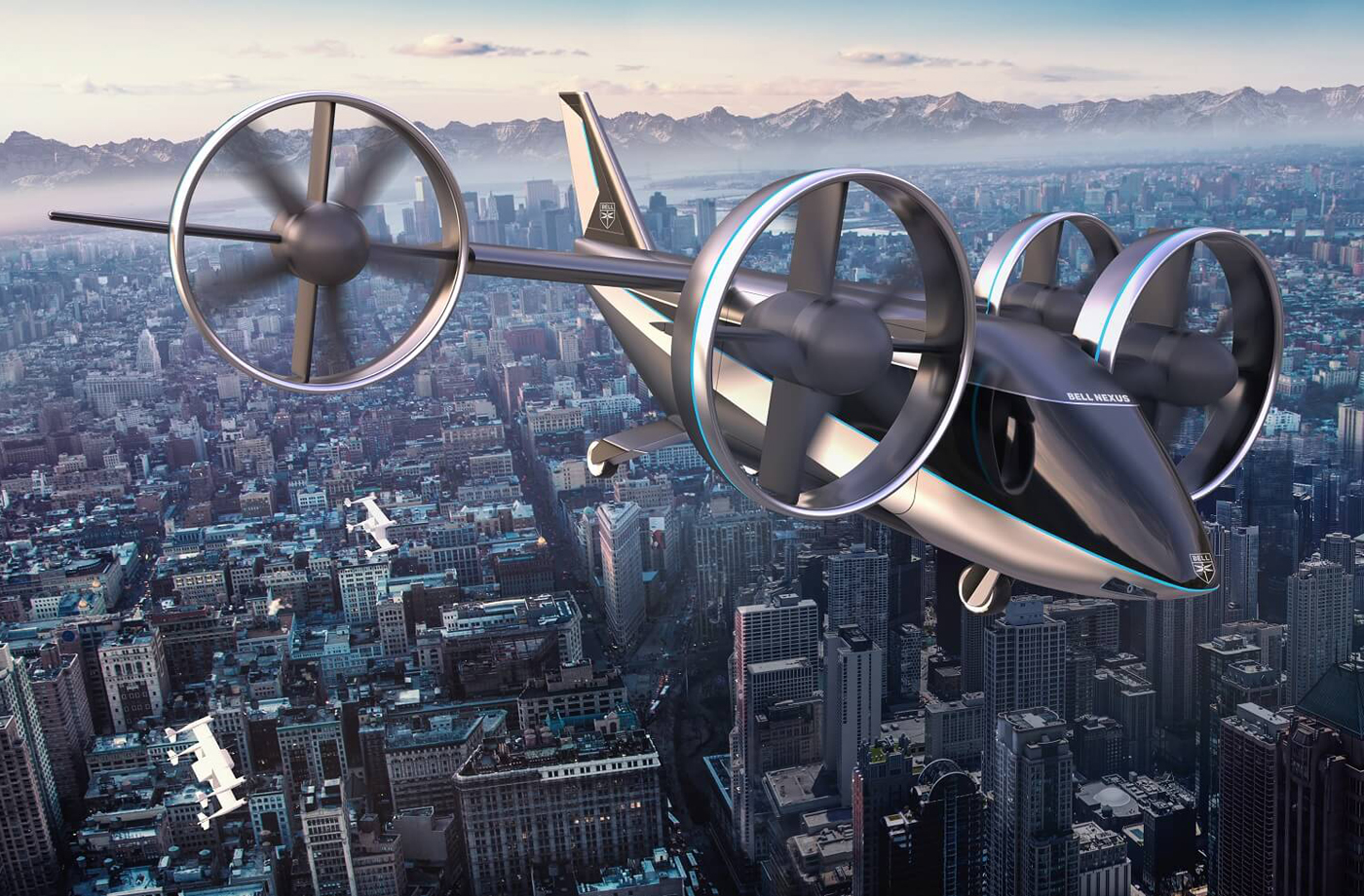 Can hybrid-electric propulsion improve the efficiency, economics and noise of rotorcraft until better batteries come along?

Eagle Flight Research Center at Embry Riddle Aeronautical University has a hybrid propulsion testbed with a diesel-burning piston engine and electric generators integrated by controls that can simulate eVTOL power profiles. The test stand has already demonstrated 94% efficiency turning mechanical energy into electrical power. Center director Dr. Pat Anderson is a co-founder of the eVTOL propulsion firm VerdeGo Aero and concluded, “I think hybrid is the best solution hopping from building to building. I think in 15 years, batteries will be the answer. I don’t think they’re the answer today.”

Bell has designed its Nexus ducted fan air taxis compatible with either turboshaft-hybrid or battery power. However, Sabrewing Aircraft Company designed its Rhaegal regional eVTOL cargo drone around a series of turbo-electric drivetrain without storage batteries. Sabrewing chairman and chief executive officer Ed De Reyes concluded, “...batteries are still very heavy, don’t do well in cold environments — above 12,000 ft [3,660 m]. [They] still weigh the same when they’re empty as when they’re full, and the energy density of those batteries is a fraction of jet fuel.”

VerdeGo Aero chief executive officer Eric Bartsch told the CAFE-VFS symposium that distributed electric propulsion can improve aircraft efficiency, emissions and noise, but cautioned, “That’s only useful if there are enough electrons in the aircraft to deliver useful and safe mission profiles.” He added, “Hybridization allows you to make significant progress on efficiency, emissions and noise, while it also allows having an aircraft that’s highly useful and highly capable.”

Like battery power, hybrid thermo-electric propulsion makes vertical flight aircraft possible that would otherwise be too complicated and heavy with mechanical drivetrains. “You might have 27 really tiny rotors, and that is mechanically not feasible,” said Anderson. Decoupling engine speed from rotor speed also affords designers new ways to optimize engine efficiency and control noise. Bartsch suggested, “With the hybrid aircraft, you can spend electrons on quietness when you need it the most. At high altitude, away from people, you can shift to maximum efficiency.”

Honeywell Aerospace developed a hybrid-electric mission analysis tool to help designers evaluate their turbines and generators. The company displayed an HTS-900 gas turbine engine integrated with two 200 kW generators at the Helicopter Association International (HAI) Heli-Expo in 2019. The company laboratory in Mexicali, Mexico, plans system-level demonstrations of a production-ready 1 MW generator that weighs less than 300 lb (136 kg) for early next year. Meanwhile, Honeywell has tied an automotive electric drive motor and inverter to a flight controller in the laboratory, and the company aims to make turbines lighter and more fuel efficient and generators with better power-toweight ratios for electric aircraft.

Reciprocating diesel engines burn only 60% as much fuel for the same power. VerdeGo Aero in Daytona Beach, Florida, pursues both battery and hybrid-electric solutions for electric flight. Co-founders Bartsch, Anderson, and Erik Lindbergh made a compelling case for piston hybrid-electric flight in a Lindbergh Foundation talk in June. Anderson calculated, “If you think of a hybrid as a battery in a different pack, it’s four to six times better than a battery [alone] today.”

Batteries are typically designed to either store energy or to provide rapid power with a high “C-rate” of discharge. All eVTOL profiles demand maximum power for vertical takeoff and landing and lessen their draw in cruising flight. Hybrid electric aircraft with purpose-built distribution bus controls can balance battery and generator power to suit mission requirements. C-rate can be adjusted for better thermal management. Hybrid air taxi networks might also require a single refueling station instead of an entire city rewired for fast battery charging. “When you look at really big peaks and valleys,” said Anderson, “the idea of having something that makes power to charge the battery is very attractive.”

Argonne National Laboratory in Lemont, Illinois, developed the high-energy-density nickel-manganese-cobalt (NMC) oxide cathode used in many lithium-ion battery-powered electric ground vehicles today. Research and development continues on advanced chemistries for aircraft-level energy densities greater than 500 Wh/kg. Srinivasan said, “At Argonne, we don’t just stop at discovering new materials at the lab-scale, we scale them up into large volumes and make large-format prototypes with them to ensure that we study their operation under real conditions.” He added, “This complete spectrum, from new material discovery to prototypes, tightly integrated with each other, allows us to rapidly find the next big battery that can satisfy the energy density, cost, power density, etc. [required] for aircraft applications.”

Argonne director of energy systems Don Hillebrand told the Lindbergh forum, “As aviation customers begin to discuss the need for higher power batteries, we may begin to see a focus on the chemistries we’ve bypassed, those that have capacities for higher energy, for higher C-rates.” The aim is high-power battery technologies that reduce cost to $20/kW and extend life to 15 years.

“We’ve got a lot of different tricks to make batteries improve. The problem is they all take time. You can’t rush them. You can’t speed them along, although we’ve tried to.”

Higher-energy chemistries may also compromise battery discharge-recharge cycle life and eVTOL economics. Hillebrand also acknowledged, “The packaging problems for aircraft are far more difficult than the problems for cars. It adds a lot of weight. It adds a lot of problems.” Battery energy density typically grows 3 to 5% a year. “That’s a good return,” Hillebrand said. “It’s not dramatic. We haven’t seen anything on the horizon that’s going to give us a gigantic step.”

On the CAFE-VFS panel, Bartsch considered, “Why have so many urban air mobility startups emphasized battery-only solutions? I think, unfortunately, it’s because a lot of people aren’t doing the math and don’t understand the physics… When you want to do these commercial missions and get a vehicle that’s capable of more than a demo hop, you really have to know how much energy you’re going to have on the aircraft. The fact is, the math doesn’t work for a lot of these market segments for batteries right now. The math will work in 20 years, but we don’t want to wait.”

Where today’s best batteries provide energy density around 200 Wh/kg, integrated hybrid-electric systems can achieve 700 to 1,000 Wh/kg. Extra speed and range have value to aircraft operators, and even if today’s best lithium-ion batteries can lift eVTOL vehicles, they provide little safety margin. Anderson noted on the Lindbergh Foundation panel, “Some of them don’t have the reserves necessary.” He noted battery specific energy drops by a third when installed in an aircraft, allowing for the weight of thermal management, bus distribution and structure.

VerdeGo analyses show hybrid systems where diesel piston engines drive generators to charge batteries can cut operating costs 40%, carbon dioxide emissions by 35% and noise by 10 dB compared to combustion engines alone. IDEP plans to use one engine and generator set to power small aircraft; two for larger vehicles. A redundant twin-engine piston hybrid promises four times the performance of an allbattery aircraft with lower life-cycle costs. Bartsch observed, “It’s not the energy costs of a battery aircraft, it’s the costs of swapping out the batteries frequently because they’ve worn out and are no longer appropriate for aerospace usage.”

While military rotorcraft might benefit from the high continuous power of turbine hybrids, low-flying, short-hop urban air mobility favors piston engines. Concept aircraft that use multiple lift propellers can use extremely rapid changes in power to control the aircraft. Reciprocating engines provide better transient response to fast changes in rotor power. “The slower your engine is in responding to those changes, the more batteries you’re going to need and the more complicated your electronics are going to become,” observed Continental  associate vice president of engineering Chris Pollitt. “Pistons are not going to be as responsive as a battery, certainly, but they’re highly responsive sources of power when it’s needed.”

Hybrid-electric propulsion systems that decouple engine torque and rotor rpm enable eVTOL designers to better control propeller tip Mach numbers and reduce noise in sensitive environments. The choice of an engine also plays into noise calculations. Pollitt offered, “If you’re going to try to make a turbine quiet, you’re going to lose a whole lot of its performance and weight benefits... On the other hand, there’s a lot of well-established technologies to reduce the noise from a piston engine. There are muffler technologies and combustion optimization technologies that allow us to get the noise from the engine very, very, very quiet.” The Eagle Flight Research Center built a fully functional 300 kWh hybrid propulsion system including an off-the-shelf Continental diesel engine, off-the-shelf generators and batteries.

The test rig components are not flight-weight optimized. “The base engine is not far away, but we are heading in a direction of modifying that engine to drive a generator from a structures standpoint,” said Anderson. Structural ties through the crankcase will carry generator loads through the engine front shaft. Liquid-cooled, automotive-style generators are farther away from becoming flight-sized. “The goal is to generate a requirements document for a specialty generator.”

Unlike aircraft, automotive hybrids can recover energy from regenerative braking to make up power-conversion losses. Airborne generators, control electronics and batteries also have to dissipate a lot of heat. VerdeGo Aero technology uses rotor rpm to control the hybrid system. “Our system is much like a constant-speed propeller,” said Anderson. “From that, we can operate at the sweet spot of the motor-generator combination.” Powerdistribution controls are also undergoing development for flight hardware. “This stuff is really heavy,” he acknowledged. “You have fuses, breakers, multiple systems for redundancy. We’re well down that road. I think we have a good handle on it.” The ultimate vehicle interface is to be determined. “The airframers all have different ideas as to what this looks like.”

Bartsch told the Lindbergh audience, “We need to really make sure that the airframe design marries well with the propulsion system. We’re using the hybrid propulsion system to enable an aircraft with characteristics that weren’t possible with conventional propulsion.”