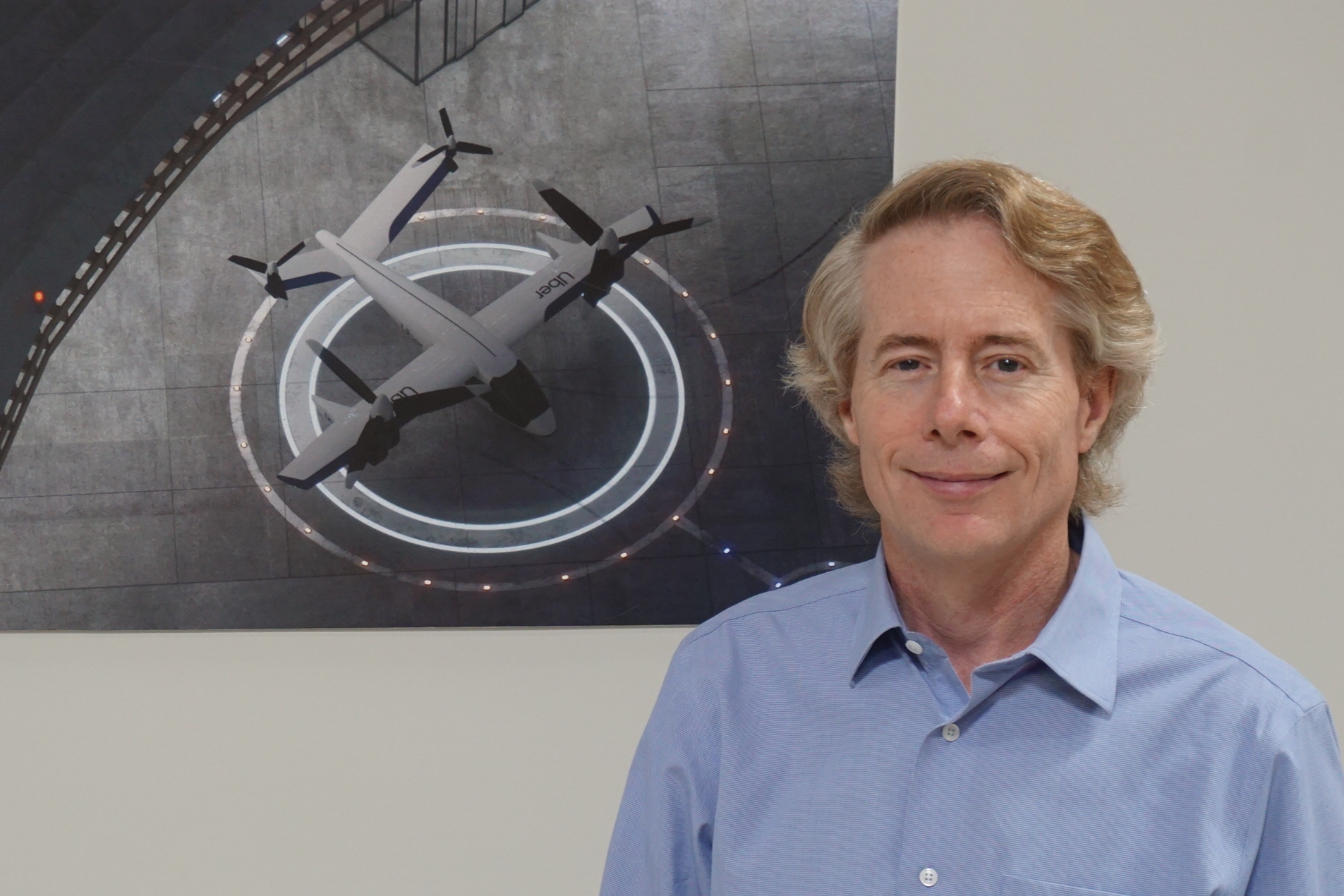 With his team of engineers and product developers in Santa Ana, California, Overair CEO Ben Tigner aims to apply Abe Karem’s optimum speed VTOL propulsion technology to urban air mobility (UAM). “Overair is a spinoff of Karem Aircraft, although its business goals are totally different,” he explained. “Overair is all about offering people more access to opportunity. If you live in an urban area, the city around you offers lots of wonderful opportunities. But your daily routine is limited by a circle of how far you can travel in a practical amount of time.” Overair plans all-electric air taxis to broaden the circle above congested streets [see Overair's Butterfly entry]. Tigner acknowledged, “Obviously, the vehicle is just one piece of a vast, interconnected ecosystem that brings that about. We’re trying to help bring about a whole new mode of transportation that opens up urban and regional centers.”

Tigner believes optimum speed VTOL technology makes UAM practical, safe and quiet. “For electric-powered airplanes, battery capacity and battery power density are limited. Motor power density is a little bit limited. We’re getting to the point where those things are mature enough where we can have realistic vehicles, but if you have a propulsion system that gives you more thrust for the power available, you can carry people that much farther, that much faster, using less energy.” The physicist explained, “Optimum speed propulsion keeps the propeller airfoils operating near their most efficient lift point, like an airplane wing flying near the sweet spot of its power bucket. This lets us get more utility from the propulsor without spending as much energy compared with conventional VTOL propulsion. This efficiency gives us utility margin that can then be applied to safety, noise, operational considerations and economics.”

Better, safer vehicles are more likely to earn public acceptance. “Overair’s propulsion technology lets us build more excess power and more redundancy into the aircraft,” said Tigner. “We can allocate that additional power budget to things that build additional safety into the system.” The technology also fits the urban environment. “The acoustic output of UAM vehicles is going to be one of the attributes that defines the growth pace of high-density operations. As you put more and more vehicles in the sky, the quieter they are, the more they’ll be accepted. The louder they are, the fewer that will be allowed to operate.” Tigner added, “It’s really important to us that it’s an electric vehicle, not a fossil fuel vehicle. It’s limited noise, no tailpipe emissions. It’s something to make city life more pleasant.”

Ben Tigner grew up in Ithaca in upstate New York. “It was a great place to grow up because of the fact that it’s in the shadow of Cornell, which meant there were a lot of interesting people. My dad was a physicist at Cornell. He was a great technical mentor.” Maury Tigner took a practical view of science and his son recalled, “He encouraged me to learn how to build electronics, how to program, how to weld and machine so I could build things.”

The senior Tigner did not steer his son to an aerospace career. “Interestingly, he was not really interested in airplanes,” said Ben Tigner. “From the youngest age I can remember, everything about flying things fascinated me. Every time an airplane flew over, I would run outside and watch until it passed out of sight. When a helicopter appeared, that was just magical.” But aviation had little impact on his undergraduate studies at Cornell, conceded Tigner. “I always viewed my fascination with airplanes as a non-professional thing. I was studying physics and math and figured I’d be a computer scientist or work on robotics.”

Doctoral studies at Stanford in California took Tigner further from aviation. “As a physics researcher, I measured very esoteric dielectric properties in strange materials at temperatures below 100 milli-Kelvin. Near the end of my PhD program, I happened to find a house-sitting gig where I didn’t need to pay rent. I had always wanted to learn to fly but couldn’t afford the lessons. So, the living arrangement gave me the cash flow to pursue my flying interest, and I just fell in love with it.”

Flying changed Tigner’s career outlook. “As I finished up my PhD, I realized I didn’t really have a thirst to be a research physicist. But learning to fly inspired me to ask myself if physicists had anything to offer in aeronautics research. I joined an aeronautics department research group run by Ilan Kroo, which lead to some flight experiment programs.” The work included tests of a 20-ft (6.1-m) span oblique flying wing airplane with asymmetric sweep. “Those were the first steps along the path that lead me to where we are now.”

Tigner joined Frontier in 1994. “Abe heard that I was a physicist instead of an engineer by training. He saw value in the broader perspective I might bring and hired me right away. It’s been a long road since then. When we didn’t win the Phase Two program for Tier II+, I went back to Stanford. It wasn’t until 1998 when Abe proposed and won another DARPA program to develop the A160 helicopter. We talked about it, and really quickly I decided, ‘That’s what I want to do.’”

The A160 Hummingbird used an optimum speed rotor to improve helicopter speed and range. “The primary benefit of the optimum speed rotor is it allows you to generate thrust using less power than a conventional helicopter rotor. If you spin the airfoils at their ‘bucket’ speed, it takes you less power to generate thrust. The dynamics of conventional rotors constrain most helicopters to operate at nearly fixed rpm. The magic of Abe’s innovation was to figure out how from a mechanical and aerodynamic point of view to execute a rotor that could operate across a wide range of rpm.”

The variable speed Hummingbird (originally using a piston engine but later developed with a turbine and variable speed transmission), stiff composite rotor blades and electric blade controls opened new possibilities. “That was my first exposure to rotary-wing,” noted Tigner, “and right away it was diving into the deep end. Abe gathered the best experts available, whether they worked for us or were members of the government’s technical advisory board.” Army technologist Mike Scully relished pointing out the ways that helicopters were more challenging than fixed-wing airplanes. “He predicted that after my first exposure to rotary-wing engineering, I’d never be able to go back to ordinary fixed-wing aircraft because the rotary-wing design space was too fascinating to walk away from. He was right.”

The A160 first flew in January 2002 and later hit 20,000 ft (6,100 m) hover out of ground effect, 146 kt (270 t) cruising speed and 18.7 hours endurance. Boeing acquired Frontier in 2004, and Tigner became the A160 chief engineer, but the revolutionary helicopter failed to win production orders. Tigner concluded, “There was certainly a call for the A160, but at that time, the [fixed-wing] Predator had reached a level of maturity where it had become a really useful tool. I think most of the government investment in unmanned systems at the time went to things like the Global Hawk and Predator.”

Tigner left Boeing to run his own company for a time. “Among other things, I chased airborne wind power. The idea was to develop an aircraft that could harvest energy from the airstreams high off the ground. Because the winds at altitude can be so much stronger than near the surface, theoretically you can generate power using much smaller machines and at lower cost than on the ground. It was a fascinating project, but Abe approached me with another opportunity at Karem Aircraft, the company he’d formed after selling Frontier to Boeing.”

Karem was busy applying the lessons learned from the A160 program to design tiltrotors that combined attributes of rotorcraft and fixed-wing aircraft. “He was one of the teams working on what was then the JHL [Joint Heavy Lift] program, an ambitious Army program to develop very large heavy-lift rotorcraft. Abe’s design was a large Optimum Speed Tiltrotor (OSTR), which built on the concepts demonstrated in the A160 Hummingbird but significantly advanced and improved the technology.” Ultimately, JHL never attracted the necessary support from the US Air Force, and it never went forward.

Soon after, however, the Department of Defense initiated the Future Vertical Lift (FVL) program, and the Army launched the Joint Multi-Role (JMR) initiative, aimed at replacing Black Hawk and Apache helicopters. Karem’s JHL technology found application in the smaller JMR Technology Demonstrator. Tigner observed, “There was a need for low acoustic signature. There was a need for high-speed, long-range transportation to quickly react to events on a global scale in a way that regular helicopters simply can’t.”

Ben Tigner joined Karem Aircraft in 2010. “I’m very proud of the innovations we brought forward under JMR. Among many other breakthroughs, we were able to engineer a reliable, practical individual blade control [IBC] actuation system that for the first time enables highly redundant all-electric control of blade pitch without any hydraulics or swashplate. The implications of this system for future VTOL aircraft are really significant.”

Full-scale OSTR nacelle testing with IBC continues for the military, but Karem spun off Overair to pursue commercial applications in UAM. Overair plans to certify the Butterfly air taxi by mid-decade using propulsion technology that improves on Karem’s innovations. “Our development strategy is aimed at a vehicle that the FAA will be very, very comfortable with,” noted Tigner. “We are not trying to make a whole series of experimental vehicles along the path.”

UAM challenges are significant, acknowledged the Overair CEO. “This is an industry-wide enterprise. We’ve seen a lot of optimism and a lot of over-hype. It is a gigantic undertaking that’s multi, multi-faceted. I think now there’s a recognition across the industry of all of the dimensions of the problem. So long as all the stakeholders continue to advance in all those dimensions simultaneously, we will get there.”

Ben Tigner joined the American Helicopter Society in his A160 days and values the Vertical Flight Society today. “Like Mike Scully told me, helicopters are something magical and special and very challenging. He thought it was important to partner with a community of people who appreciate the challenge. Even though we’re competitors, we’re also collaborators. AHS, now VFS, has always been the forum to make that community more collaborative.”

You already know that the VFS Vertipedia includes information on hundreds of aircraft, organizations and historical milestones. But did you know that you can also read all of our past Leadership Profiles as part of nearly 500 biographies? Check it out! vertipedia.vtol.org