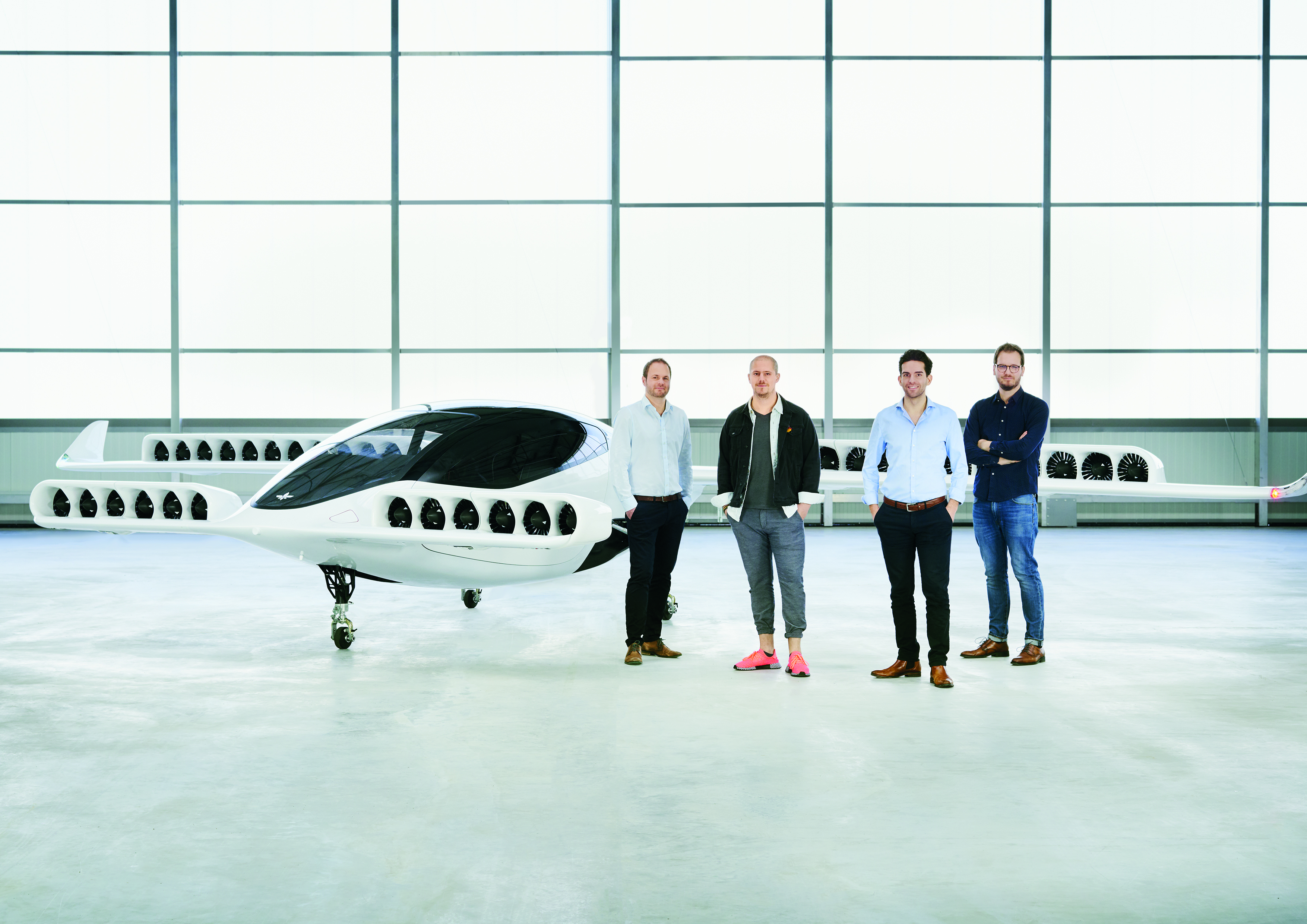 Lilium Goes Its Own Way

Vertiflite visited Lilium in Germany for an update on an eVTOL developer that stands out from the crowd for a number of reasons.

If German electric vertical takeoff and landing (eVTOL) aircraft developer Lilium GmbH had a theme song, it might be the Fleetwood Mac classic, “Go Your Own Way.” More than 150 companies worldwide, most of them startups, are pursuing the tantalizing vision of a multibillion-dollar eVTOL market, but Lilium’s aircraft design and business model go in drastically different directions from most of the rest.

“What Lilium is focused on, and you can also see this in the design of the aircraft, [is] regional air mobility, which means connecting cities to other cities,” said Daniel Wiegand, cofounder and chief executive officer of Lilium, speaking in a September interview at his company’s offices at Sonderflughafen Oberpfaffenhofen, a private airfield about 20 miles (30 km) west of Munich. “The Lilium Jet is designed to be the best aircraft to meet that business model.”

Wiegand and three co-founders started Lilium GmbH in 2015 while still graduate students at the Technical University of Munich and continue to lead the company today. His three co-founders are Sebastian Born, Head of Mechanical Systems and Verification; Patrick Nathen, Vice President, Product; and Matthias Meiner, Head of Autonomous Systems.

Many eVTOL designs feature multiple open or ducted propellers for vertical takeoff and landing, usually either fixed on booms connecting one or more wings, combined with a pusher propeller for horizontal thrust (called “lift + cruise”), or tilting propellers with some combination of wings and canards (“lift + lift/cruise” or “vectored thrust”). Others are reminiscent of hobby drones, with open rotors or ducted fans held above and/or below the fuselage on spars, without any dedicated thrusters for forward flight (“multicopters” or “hover platforms”). Many such configurations look cluttered or downright clunky.

The all-electric Lilium Jet, by contrast, is a sleek ovoid with an aft wing and shorter forward canard that together hold 36 ducted fans — 24 in the wing, 12 in the canard. The fans are embedded in tilting flaps that swivel down for vertical and level for horizontal flight. Thirty-six electric motors powered by lithium-ion batteries turn those fans. The white wing, canard and underbody of the aircraft are offset by a dark-tinted canopy on the top of the vehicle’s smooth, flat, river-rock-shaped fuselage. The Lilium Jet is undeniably beautiful.

“We assessed more than 20 existing aircraft concepts, from multicopters to tiltrotor aircraft, to find the perfect solution, but soon realized that none of these satisfied us,” the company’s website declares. “Our answer? We threw away the rule book and invented something the world had never seen before.”

But pretty is as pretty does, and so far, no one outside Wiegand’s company knows what the aircraft really can do. More than a few aerospace engineers question whether Lilium’s promises are technologically possible.

The aircraft is still in the early stages of flight testing, but Wiegand vows that the Lilium Jet will cruise at 162 kt (300 km/h) to ranges of up to 300 kilometers (186 miles) on battery power alone while carrying four passengers and a pilot or, in an autonomous version, simply five passengers.

“We have a fully-electric, fully-battery-powered aircraft that can fly 300 km on one single charge,” Wiegand told the audience in a Nov. 6 appearance at Web Summit 2019 in Lisbon, Portugal. Standing on stage in a black tee-shirt and black jeans, the black-haired, brown-eyed, 6-foot-1 (1.85 m) Wiegand talked passionately about how the Lilium Jet could change the world. As he spoke, a flight test video montage the company released on Oct. 22 played on a screen behind him. “It flies in cruise flight 300 kilometers per hour, and it’s completely emission-free and extremely silent,” he said. “Suddenly, we can live in the countryside [and] work in the city, as [in the city] we find jobs way easier.”

In our interview, Wiegand said 300 km actually would be the outer edge of the Lilium Jet prototype’s range on today’s batteries, carrying only instruments and with no cabin installed. He declined to provide the prototype’s gross takeoff weight, but said it couldn’t carry passengers 300 km because regulators require passenger aircraft to carry enough reserve fuel to go into a holding pattern for 30 minutes or more or to divert to another airfield if unable to land as scheduled.

“Today’s batteries are between 260 [and] 280 Watt-hours per kilogram. That’s what you can buy off the shelf at the moment, and these batteries are in the prototype at the moment,” Wiegand said. “With these batteries, the maximum we think we can achieve is something around 300 km range… but that doesn’t mean you can fly it in service,” he added, “because in service you need to keep operational reserves” of energy “for headwinds and rain.”

Lilium expects the energy density of batteries to get far better in the future, Wiegand said. Once the Lilium Jet goes into service, as the company promises it will do in 2025, customers could fly nearly from New York to Washington or Boston in one hour, he said. “This is at the beginning of the service,” Wiegand added, grinning broadly. “With better batteries, you can also get to four [or] five hundred kilometers of range.”

Outsiders doubt Lilium’s promises because the company has been extremely secretive. Lilium’s website (www.lilium.com) offers a number of photos and videos, including the October flight test video montage, but no specifications or statistics. There are images of the aircraft’s ducted fans on the website, for example, but nothing about their measurements, and Wiegand declined to reveal the diameter of the ducts. He also declined to specify the aircraft’s disk loading, other than to say that it is “much higher” — yet makes much less noise — than the 22 lb/ft² (107 kg/m²) of the V-22 Osprey, the aircraft Wiegand often says inspired him to create the Lilium Jet.

“I can’t give you the number,” Wiegand said. “We’re never publishing any technical specs of the aircraft.” And though the first prototype and a second one Lilium is building were housed next door to the company’s offices in a large new building described as a manufacturing facility, Wiegand declined my request to see the aircraft in person.

“I don’t think that we’re going to show it,” Wiegand said. “You would see a lot of technical details for which you would have to sign an NDA [Non-Disclosure Agreement] to be able to see them.”

An article in The New York Times on Nov. 5 said that, “After accepting an invitation to be the first journalists to see its jet, reporters from The New York Times arrived at Lilium’s headquarters last month only to face restrictions on what they could photograph or see.”

Other eVTOL developers also have been secretive. “Everybody thinks they’re leading the charge, so they don’t want to give anything out,” observed Dr. Juergen Rauleder, assistant professor for rotorcraft and vertical takeoff and landing aeromechanics at the Technical University of Munich and a member of the Vertical Flight Society’s Board of Directors. However, most other secretive eVTOL developers seem to spend less time and effort than Lilium does on marketing, which the company sometimes does with artful statements.

The October flight test video posted on Lilium’s website to mark completion of the aircraft’s “first phase of flight testing,” for example, showed the prototype taking off vertically, flying forward, flying in arcs, and landing vertically, though not in one continuous flight. In forward flight, the fans appeared to be tilted at roughly 45 degrees, not horizontal. But a news release accompanying the video said that, “The new footage reveals, for the first time, the aircraft transitioning from vertical flight to level flight. This signature maneuver, first completed just weeks after the aircraft’s maiden flight, is one of aerospace’s greatest challenges and is what gives the Lilium Jet its significant range advantage, with its two sets of wings contributing to much higher levels of efficiency than in aircraft lifted solely by rotors.”

Asked by email if the prototype had actually made the transition from powered lift to wingborne flight, company spokesman Oliver Walker-Jones acknowledged it had not. “Yes, we transition to horizontal flight but, no, it’s not fully wing-borne; this will come at a higher speed — still we’re very proud of the transition given its smoothness!” Walker-Jones wrote.

Whatever others may think, Lilium has found venture capitalist believers. In 2016, not long after Wiegand and his three fellow Technical University of Munich classmates founded Lilium, the company raised $11.4M in a Series A funding round led by Atomico, a European venture capital firm founded by Skype cofounder Niklas Zennström. In 2017, Lilium raised another $90M in a Series B funding round led by Chinese internet business giant Tencent.

“We are probably one of the best-funded projects in the market,” Wiegand boasted in our interview. And media reports since then have said Lilium is seeking another $400M to $500M in investment.

Wiegand said the company is so stingy with public information because “we need to make sure that we protect our IP [intellectual property] and that we don’t have too many people being able to exactly derive what we can do.” That might allow others to gain a competitive advantage, he said.

If that makes anyone doubt Lilium’s claims, Wiegand said, “This is great. We’re totally happy with this. I mean, the aircraft is flying. It’s flying here. We don’t need to prove to anybody that we are existing or that this aircraft can fly. We have a very clear technical and certification roadmap and we’re following this, and we — so far — have met every single promise and every single milestone we’ve made.”