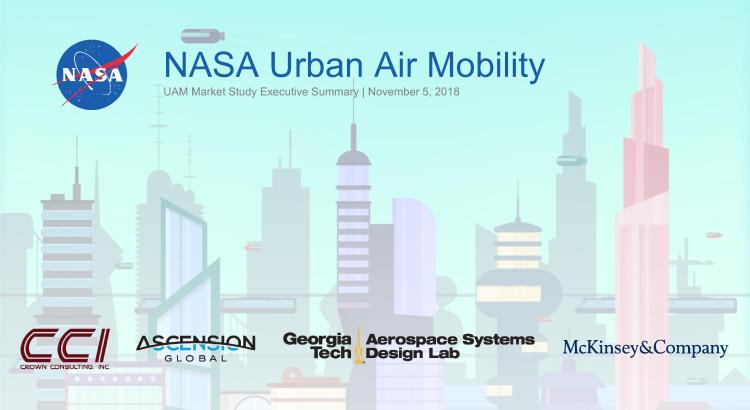 In 2017, NASA hired two teams of consultants to study the viability of different urban air mobility (UAM) use cases.

Both reports explore many of the complex opportunities and challenges that NASA expects to address with industry, government and academic partners in its Urban Air Mobility Grand Challenge which will launch in 2020.

The study conducted 100 interviews with experts across the UAS, eVTOL, regulatory and relevant technology fields, detailed assumptions and inputs for more than 50 variables, and aggregated insights from large consumer and business-to-business surveys with more than 2,000 respondents. The consultants also developed a detailed econometric model.

The report found that a commercially viable market could exist for last-mile parcel delivery and air metro by 2030, but “it’s unlikely that there will be a widespread air taxi market in 2030 due to high investment costs,” but there may well be concentrated areas of high-net-worth individuals and businesses served by air the taxi solution (e.g., Manhattan to suburbs).

The lessons learned included that “it is critical to evaluate UAM in terms of specific use cases” and the “viability of specific UAM use cases likely requires a holistic approach that takes into account a complex ecosystem.”

The results suggest, “Airport Shuttle and Air Taxi are viable markets with a significant total available market value of $500 Billion at the market entry price points in the best-case unconstrained scenario.”

The unconstrained scenario refers to a case where infrastructure is available for landing and takeoffs, there are no capacity limitations and demand is not constrained by a willingness to pay. (Note: the US domestic airline industry has an annual market value of $150 billion).

The study also found that the air ambulance market served by eVTOLs “is not a viable market due to technology constrains, but utilization of hybrid VTOL aircraft would make the market potentially viable.”

This report outlines the process used for market selection, market calibration and selection of priority opportunities. It also looks at legal and regulatory elements, societal barriers and weather.

The report finds that “significant legal/regulatory, certification, public perception, infrastructure, and weather constraints exist which reduce market potential in near term for UAM,” but “after applying operational constraints/barriers, 0.5% of the total available market worth $2.5B can be captured in the near term.”

Both UAM reports were commissioned to provide NASA with a foundation to launch its first urban air mobility “Grand Challenge” by late 2020 which will provide an integrated vehicle and airspace operational environment as a “proving ground” for vehicle developers.