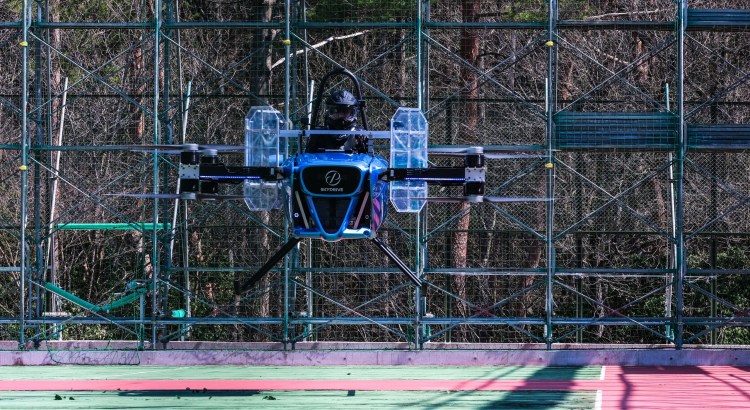 World-leading flying car developer, SkyDrive, has entered the final stages of testing its demonstration vehicle after it completed the first-ever manned test flights in Japan.

The company, based in Shinjuku ku, Tokyo, has also unveiled leading aerospace engineer Nobuo Kishi as its Chief Technology Officer (CTO). Mr Kishi, who has held top posts at Mitsubishi Aircraft Corporation, will take forward the final stages of testing. This airworthiness stage will involve testing the aircrafts suitability for safe flight.

SkyDrive has completed its technical verification phase. Since launching an unmanned outdoor flight test in December 2018, it has conducted numerous technical verifications. This was followed by manned flight tests that started in December 2019 and completed safely in March 2020 – confirming the controllability and flight stability of the test aircraft. The next stage, which is starting now, involves feeding back improvements to technical design that were picked up during the manned operation of the aircraft.

SkyDrive looks set to launch its flying car to the Japanese market in 2023. Safety is a key priority and it will be following the same level of development management that is practiced by conventional aircraft manufacturers during the airworthiness certification phase.

Mr Kishi will bring considerable expertise and experience to the team, which will enable SkyDrive to take to the skies before competitors. SkyDrive uses lean development*2 and Mr Kishi will advance this process with further attention to safety and accelerate aircraft development.

“Throughout my career spanning four decades, I have gained considerable experience and knowledge in type certification, safety verification, project management, and system integration.

“I will help SkyDrive develop the flying car and bring it to the market. Together we will revolutionize the concept of air transport – benefitting both businesses and the lives of consumers.

“I would like to help take the industry forward by introducing a lean development process, while ensuring the same degree of safety as conventional aircraft, implementing advanced components, and employing innovative mass production processes learned from various industrial sectors.”

*1 Flying car: officially called an “electric vertical takeoff and landing (eVTOL)” aircraft, it is characterized by electrification, automated controls, and vertical takeoff and landing. Development of flying cars is being advanced to fill the role of a new mode of mobility. In Japan, flying cars are anticipated to be used for taxi services in urban areas, as a new mode of transportation on remote islands and mountainous areas, and as a means of emergency transportation in the event of a disaster. As flying cars are inexpensive, quieter, and require compact space for takeoff and landing compared to conventional aircraft, they are expected to make flying a routine form of mobility. The flying car market is expected to grow to 150 trillion yen globally by 2040 (Morgan Stanley research), making it a promising next-generation industry. In Japan, the Public-Private Council for Air Transportation Revolution has met since 2018 and has established a roadmap for business commencement in 2023 and expanding practical use in 2030 (Ministry of Economy, Trade and Industry and Ministry of Land, Infrastructure, Transport and Tourism). In industrialized countries, flying cars are expected to alleviate congestion and be used in the event of a disaster, and in emerging countries, they are expected to be embraced as a mode of transportation that requires no infrastructure.

A company led by engineers from aircraft, drone, and automotive industries to develop flying cars and cargo drones to put flying cars into practical use and to contribute to the future of mobile society. A flying car is scheduled for a demo flight in the summer of 2020 and to be available for sale in Japan by 2023. The company began accepting reservations for a cargo drone in December 2019.