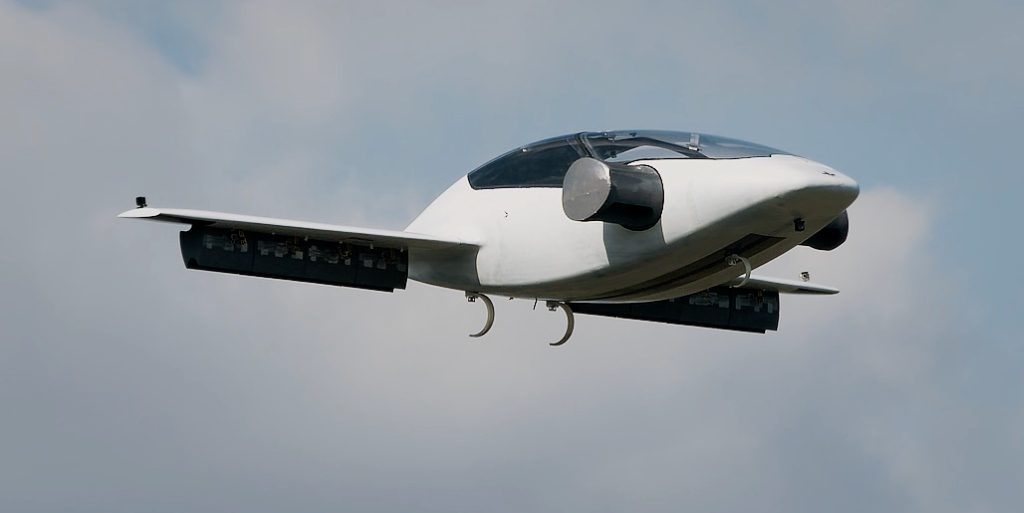 The AHS website on manned electric vertical take-off and landing (eVTOL) aircraft — www.eVTOL.news — catalogs more than 40 separate aircraft designs currently under development around the world. Nearly all of them leverage the promise of distributed electric propulsion (DEP) — using multiple electric motors, each one spinning a simple propeller, to generate thrust with the goal of making a new generation of aircraft that is efficient, quiet and safe.

The hybrid-electric VerdeGo Personal Air Taxi 200 — still in design — uses eight motors to drive cyclic pitch prop-rotors on tilting fore and aft wings; the Daytona Beach, Florida, developer expects to fly a sub-scale demonstrator with commercial motors in 2018. But currently available electric motors are proving inadequate for the needs of eVTOL propulsion, and innovators are having to design their own. According to research engineer Dr. Steven Daniel at the Embry-Riddle Aeronautical University Eagle Flight Research Center, “Off-the-shelf motors are generally okay for non-optimized designs. Unfortunately, if you’re talking about a VTOL where you’re trying to get the most endurance out of the batteries, you want an optimized design. It needs to be built at the systems level.”

eVTOL systems integrating motors, rotors and controllers with power generation, storage and distribution also have to be certified safe by the US Federal Aviation Administration (FAA) and international regulators. The General Aviation Manufacturers Association (GAMA) formed the Electric Propulsion & Innovation Committee (EPIC) in 2016 to hammer out ground rules for fixed-wing and rotary-wing electric aircraft. The 47-member committee brings together manufacturers and government agencies to talk about electric flight regulations.

“The new, simplified Part 23 regulations allow us to certify all-electric [fixed-wing] aircraft up to 19 passengers, 19,000 lb [8,600 kg],” said GAMA vice president of global innovation and policy Greg Bowles. , “There is ongoing work with the FAA and other key authorities to determine if we can apply Part 23 regulations to eVTOL aircraft with specific VTOL issues addressed with standards dedicated to VTOL differences. Optimally, within the GAMA EPIC, we are working to develop a globally coordinated path for the certification of eVTOL very quickly.”

DEP provides new alternatives to traditional helicopters (see “Lift Where You Need It,” Vertiflite, Nov/Dec 2016). However, innovative eVTOL configurations without helicopter autorotation raise new safety issues for certification. The Airbus Helicopters CityAirbus eVTOL uses four pairs of motors driving four pairs of ducted propellers. The Workhorse SureFly hybrid electric octocopter unveiled at the Paris Air Show last June has eight motor and propellers paired on four lifting booms for redundancy.  and adds a vehicle parachute for emergency landings, as do other eVTOL aircraft — though none has yet been developed for zero-altitude / zero-airspeed conditions relevant to VTOL operations (see “Tempered Vertical Lift,” Vertiflite Jan/Feb 2018. Crashworthiness and other issues for eVTOL certification are still to be addressed, but in February 2017, GAMA released the first global standard for measuring hybrid and electric propulsion in general aviation aircraft, and Bowles concluded, “I think the benefits of electric show themselves when you look at the new missions you create.”

The eVTOL vision is tantalizing: quiet, cheap, clean flight summoned by smartphone and free of runways and big heliports. Uber Elevate envisions air taxis typically operating over a 40–60-m (65–100 km) range. Where helicopters are designed to hover efficiently, eVTOL generally aims to launch vertically and transition as quickly as possible to cruising flight. “What makes it different is the ability to put rotor systems with less noise than helicopters in smaller areas with lots of operations,” summarized Dr. Richard “Pat” Anderson, VerdeGo Aero chief technology officer and director of the Eagle Flight Research Center at Embry-Riddle.

Siemens, Rolls-Royce, and Airbus made news late last year with plans for a fixed-wing hybrid-electric propulsion testbed based on a regional airliner. GE Aviation and GE Industrial are researching both hybrid- and battery-electric propulsion to augment or replace turbine power. The company has used a high-efficiency 1 MW motor/generator to drive an 11 ft (3.35 m) diameter propeller. GE’s electric aircraft work has yet to address VTOL, but the company tells Vertiflite that battery-powered primary propulsion will remain limited to relatively small applications pending significant improvements in power storage.

Turboshaft-maker Safran contends that the future of aerospace propulsion lies in efficient hybridization of thermal and electrical power. The company told Vertiflite that the gas turbine will remain at the core of new vertical lift aircraft in the short- and mid-term. Safran Helicopter Engines and Safran Electrical & Power have validated a turboshaft-electric "eco mode" in ground tests and will fly the technology on the Airbus Helicopters “Racer” for the Clean Sky 2 LifeRCraft project. The eco mode allows a pilot to idle one of two turboshafts in cruising flight for either a fuel savings of around 15% or an extended range. The idle engine returns to full power rapidly and automatically with the help of an electric motor. Safran is also working on DEP solutions.

Competitive forces have, however, stifled many other companies from revealing what they are working on. Motor maker and S4 personal aircraft designer Joby Aviation declined to discuss motor considerations for this article. ThinGap, maker of the lightweight, air-cooled brushless motors on DARPA’s XV-24A LightningStrike VTOL X-Plane likewise declined comment. And —despite promoting the more electric aircraft (MEA) concept — big systems supplier Honeywell said timing “isn’t right to talk about this technology right now.”

Electric motor technology has made visible progress in ground automotive applications. Manufacturer TM4 in Boucherville, Quebec, for example, markets powertrain systems for trucks, buses and other battery or hybrid electric commercial vehicles. It integrates high-torque/low-speed permanent magnet motors with 450 or 750 VDC inverters to generate up to 350 kW peak output. Tesla advertises its $250,000 Roadster — with three homegrown electric motors — as capable of reaching speeds of over 250 mph (400 km/h) and a range of 620 m (1,000 km) with a 200 kW/hr battery.

Unfortunately, automotive electric motor makers have yet to turn their expertise to flying machines. “It’s not happening,” noted Uber engineering director of aviation Mark Moore. “If we could get automotive OEM suppliers into our interest areas that would be fantastic.” Moore added, “All the automotive manufacturers are going to e-cars. They’re just swamped with their own needs, not others.” Those needs are focused on driving down the costs, rather than improving performance and reducing weight.

In addition, the path from automotive to aviation electric propulsion has other complications. “What’s out there commercially doesn’t work well for these applications,” observed Dr. Anderson at Embry-Riddle. “I think, first of all, a lot of the ground [motors] don’t allow any torsional bending on the shaft, unlike a conventional aircraft engine.”

Ground traction motors are not tailored specifically to aircraft mission performance. “The torque-rpm curves are probably different,” noted Anderson. “With recips [piston engines] and gas turbines, the curves are driven by the gas engines, not what’s required by the application.” An eVTOL air taxi would probably demand a high-torque, low-rpm motor in a direct drive to reduce propeller tip speed and mitigate noise. “The weight and torque-rpm curves are big deals. Obviously, we need the minimum weight. It may be possible to build an electric motor where you can specify the torque-rpm curve.”

The XV-24A LightningStrike uses permanent magnet lift fan motors with composite stators and embedded electromagnetic conductors to achieve the best power-to-weight ratio. Moore noted, “The automotive side is not nearly as weight-sensitive as we are, especially for eVTOL. A lot of configurations are lift-plus-cruise with separate motors to lift and push forward. You need to minimize that vertical lift motor mass because it’s useless mass in forward flight.”

Dr. Anderson added, “A lot of these [automotive] motors and controls are liquid-cooled. For automotive, they have pretty sophisticated control systems which are prone to failure. We need simpler motor controllers … and motor windings that enable motors to operate if windings fail. … You can design the motor with some robustness in the different failures modes of electric motors.”

Dr. Daniel at Embry-Riddle noted the fixed-wing eSpirit of St. Louis aircraft, based on the Diamond HK-36 motorglider, uses a traction motor from an automotive motor maker. He acknowledged, “It has air gaps such that there’s a lot of reluctance — there’s a high cogging to it.” Rough-running cogging in iron core motors creates resonance that can reduce the life of aircraft components. Aircraft also impose different loads than ground applications. “There is a definite difference between eVTOL and traction motors — automobiles have a lot of inertia [that] propellers don’t.”

The Lilium Jet uses three-phase permanent magnet synchronous motors, a kind of brushless direct current (BLDC) electric motor. eVTOL motor choices generally come down to BLDC or induction motors. Dr. Daniel explained, “If you want to talk about induction motors, one of the positive aspects is they’re inexpensive, extremely reliable, have no permanent magnets and last forever. The downside of the induction motor is they have a very sluggish transient response.” He added, “The kicker in all this depends on if it’s an airplane application or VTOL. In an airplane, you have lift being generated mostly by the wings; transient torque response is not all that necessary. [For eVTOL] you don’t want a situation where it takes a long time for the motor to react, particularly when you’re talking about multi-rotor machines and when the rotor is used to control the flight dynamics.”

In February 2017, EPIC published a standards document — GAMA Publication No. 16, “Hybrid & Electric Propulsion Performance Measurement” — to establish a common frame of reference for developers when measuring the performance of their hybrid and all-electric propulsion aircraft.

EPIC formulated GAMA Publication 16 to help compare operational characteristics of developing hybrid and all-electric aircraft. The publication contains typical electric aircraft flight scenarios, including a vertical flight mission between sea-level off-airport vertipads on a standard day. EPIC sought to ensure electric aircraft manufacturers took similar approaches to their endurance/range measurements, and to the capabilities they claim. The standard aims for safe energy reserves similar to National Business Aviation Association (NBAA) instrument flight rule (IFR) reserves, although eVTOL reserves are gauged by operational capability rather than just time. At GAMA, Bowles — a former aerospace engineer — observed, “With electric propulsion, the measure has to be more precise. The traditional measure of range and endurance has too much variability.” Energy measurements are also based on worst-case battery conditions, such as lithium-ion batteries at the ends of their operating lives.

F39.05 chair Tom Gunnarson explained that the ongoing review draws on aircraft manufacturers, suppliers, users, aviation authorities and academia from a number of countries. It aims for an EPU standard published by the summer of 2018. Gunnarson added, “FAA may take the result of these discussions to develop special conditions for the first applicants, as rulemaking is a long-term process.”

Bowles summarized, “We’re looking at every aspect of vehicle design. We’re also looking at operations, maintenance, infrastructure.… Our goal is to make sure this whole field goes in the right direction and is successful.”