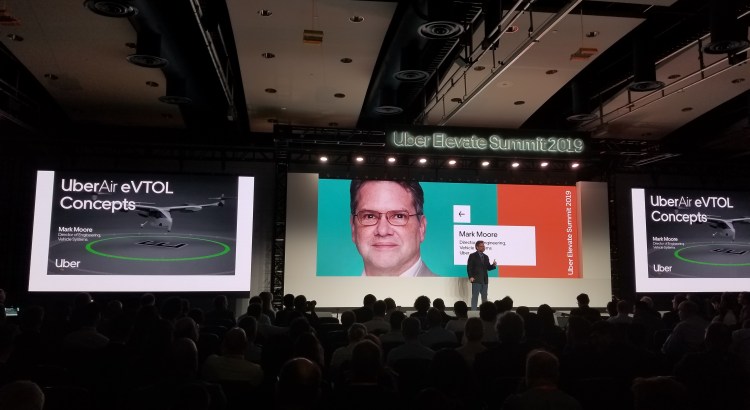 Uber Elevate Touches Down in DC

The third annual Uber Elevate Summit touched down at the Ronald Reagan Building and International Trade Center in Washington, DC, on June 11-12, 2019 — just one month after the Silicon Valley mobility company raised $8.1 billion when its shares (UBER) started trading on the New York Stock Exchange.

Larger, more diverse and more scripted than previous Summits, this year’s event brought together more than 1,200 aerospace, transportation, technology, government, investment and media representatives interested in learning more about Uber’s plans to deploy a fleet of electric-powered vertical takeoff and landing (eVTOL) aircraft on a short-haul air transport system serving commuters in some of the world’s largest and most road congested cities.

In the three-and-a-half years since the Uber Elevate White Paper was released in October 2016, Uber has been a major advocate of the idea that high productivity eVTOL aircraft can provide a cost-competitive alternative to time wasted being stuck in traffic.

Elevate was born when Uber was searching for future growth opportunities for its mobility platform. The company has been investing further in its Uber Eats food delivery service as well as new lines such as scooters, bikes, self-driving cars and freight.

Elevate has strengthened its team with professionals drawn from the aerospace, mobility, computing, research and regulatory communities.

Gone are the days when Uber executives would amateurishly disparage the safety record of the entire helicopter industry while pitching the benefits of yet-to-fly eVTOL aircraft.

Most attendees were in similar professions as the speakers, including representatives from across the aviation and vertical flight communities.

The summit included a keynote presentation by US Secretary of Transportation Elaine Chao and a fireside chat with Dan Elwell, Acting Administrator of the US Federal Aviation Administration (FAA).

The Washington Summit provided the Elevate team with a public opportunity to highlight its business needs to government leaders and hear a response. Regulating agencies have historically been unable or unwilling to move at the same pace as emerging technology, but are now looking to do better while not compromising on safety.

Uber’s ridesharing service is used by 75 million active riders in more than 80 countries worldwide. Consequently, Uber has amassed a vast archive of urban commuter data across many years and many cities that it is using to model and simulate future eVTOL air service demand.

This year at Elevate, Uber revealed that its drivers transport almost 10,000 passengers a day between Manhattan and John F. Kennedy International Airport. Uber is using this data when it launches helicopter shuttle flights between Manhattan’s Wall Street Heliport and JFK starting July 9 to Platinum and Diamond members of its customer loyalty program. The flights cost between $200 and $225 for the service provided by HeliFlite, a local charter company.

The complete journey will take about 30 minutes including an Uber car ride, with the helicopter flight taking eight minutes. In comparison, during a regular business day, the trip can take one to two hours by car or between 50 and 75 minutes by train.

The user data generated will also be used to plan the Uber Air demonstration programs that should launch in Dallas/Ft Worth and Los Angeles in 2020 — first utilizing helicopters and later eVTOL test aircraft.

At Elevate, Uber also announced that Melbourne, Australia, will be the first international city with Uber Air service, winning out over other cities in Brazil, France, India and Japan. All three launch cities for Uber Air have large, spread out populations, severe traffic congestion, and favorable weather year-round. Melbourne has a population of almost five million people and has two downtown heliport sites along the Yarra River.

Uber announced that Jaunt Air Mobility has become its sixth eVTOL aircraft partner at Elevate 2019. This follows Jaunt’s acquisition of the rights to Carter Aviation Technologies Slowed-Rotor/Compound technology earlier this year. At Elevate 2017, Carter was teamed with Mooney Aircraft, the Chinese-owned light aircraft maker that backed out of the Elevate program shortly thereafter.

At this year’s Elevate Summit, Jaunt revealed that their air taxi would be built by Triumph Group and they planned to pursue certification through FAR Part 27 (small rotorcraft), rather than the FAR 23 (small airplanes) certification path favored other Uber partners.

Bell featured the full-scale mockup of its Nexus air taxi outside on the plaza next to the Reagan Building, and had a demonstration of its virtual reality simulator in the exhibition hall, where Boeing NeXt (Aurora), EmbraerX, Karem Aircraft and Pipistrel Vertical Solutions all displayed scale models of their eVTOL concepts.

Pipistrel’s eVTOL model featured eight ducted fans in the wing covered by retractable doors or slats during forward flight. The company stated that drawings published last year were of smaller six-duct aircraft being considered for the light aircraft market, not the Uber mission.

Many visitors were surprised to see a five-seat eVTOL interior designed by Safran Cabin centrally displayed. This design was commissioned by Elevate with the goal of providing a common passenger experience across a range of eVTOL vehicles. The mock-up featured a single seat cockpit, two rows of two seats and doors with large windows. The seats were canted towards the side doors to provide more personal passenger space and easy cabin entry and egress.

Uber and Safran Cabin produced a series of six different cabin mock-ups at the company’s facility in Huntington Beach, California. This facility was once home to the C&D Aerospace interior facility that Zodiac Aerospace purchased in 2005, and which was acquired by Safran in 2018.

Elevate has also caught the imagination of architects and real estate developers, many of whom would like to help create the Elevate ground infrastructure.

Conceptual planning by several companies has advanced, with several animated presentations made that showed multi-level skyports designed to handle 4,000 passengers a day or about 1,000 movements a day by four-passenger eVTOL aircraft.

When it comes to passenger handling, Uber also announced a partnership with Signature Flight Support, the world’s largest network of Fixed Base Operators (FBOs) with over 200 worldwide locations, catering to the needs of business aircraft owners and passengers, as well as VIP charter companies.

In the scheduled airline industry, flights on high frequency routes are often consolidated on larger capacity aircraft that have lower seat mile costs. However, larger and heavier eVTOL aircraft will generate more noise than desired under the Uber use case. Uber believes that five-seat aircraft are the largest-capacity vehicles that can be designed while keeping the noise at levels that communities will accept.