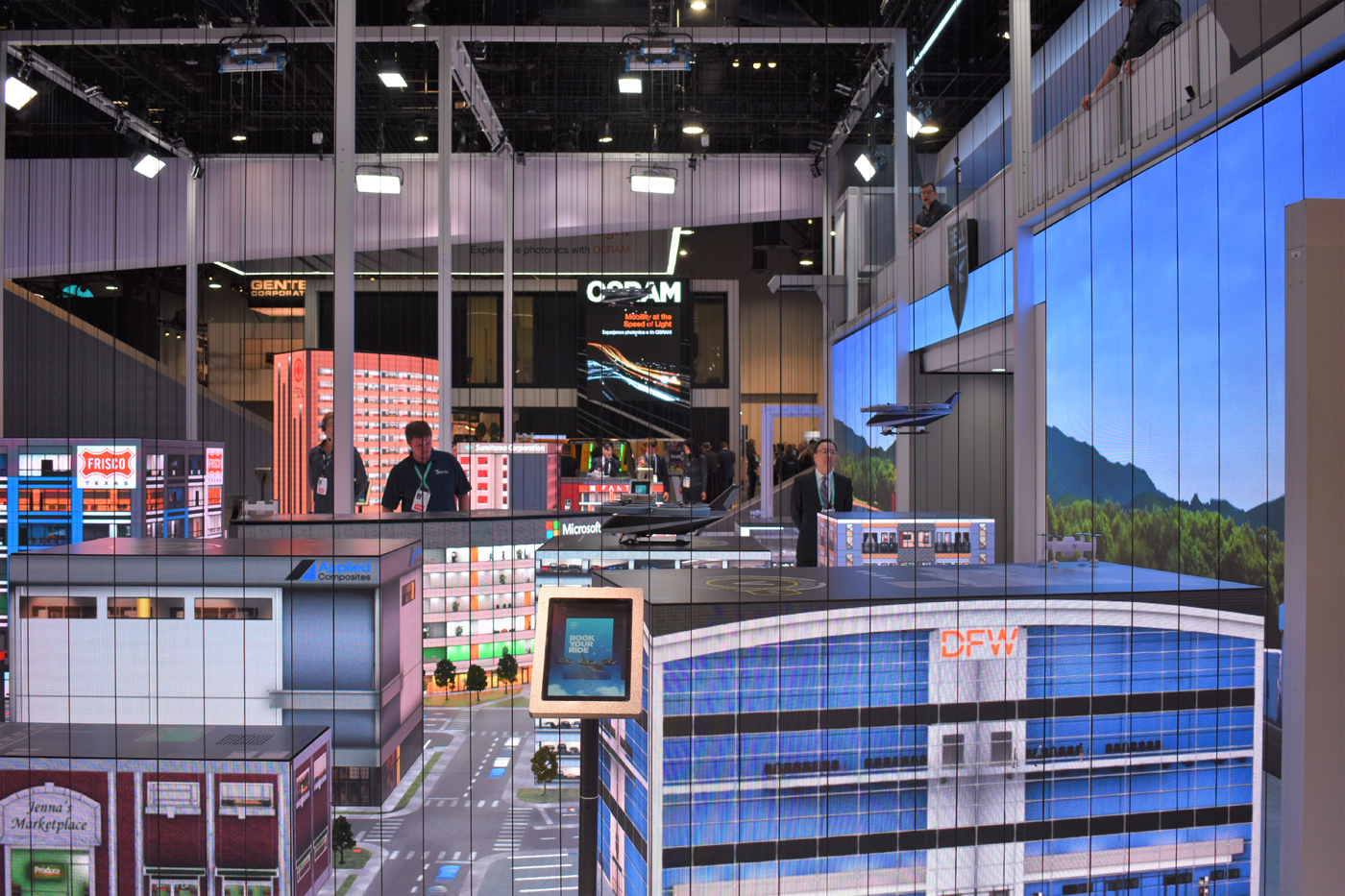 While most of the world watched CES for the latest 8K TVs, electronic gadgets and fitness equipment, aerospace and automotive companies used CES to provide a new vision of the future of personal transportation — one that utilizes the third dimension.

However, the big news happened at CES 2020 with Hyundai and Uber announcing their vehicle partnership — becoming the eighth publicly revealed partner — at a press conference the afternoon before the CES show opened. Hyundai capitalized on the opportunity by bringing a full-size mockup of their proposed vehicle, the S-A1, to CES, and thus dominated the news. The vehicle also dominated the Hyundai exhibit, consuming the entire space. The vehicle garnered headlines and heavy show traffic for all three days.

At the press briefing, Hyundai unveiled the vehicle display along with the Hyundai vision of transportation in the future. The clear message from the press briefing is that Hyundai is moving quickly from being a car manufacturer to a complete Mobility as a Service (MaaS) provider. In the company’s vision of the future, there are three key components to the Hyundai Future City Scenario: the Purpose-Built Vehicles (PBV), the S-A1 Personal Air Vehicle (PAV) and the Hub. Hyundai proffered that its vision will revitalize cities by removing urban boundaries, return time spent commuting to people and enable leaders to repurpose urban centers into innovative, modern communities. Eric Allison, Head of Uber Elevate, also joined the press briefing to announce the Hyundai partnership with Uber.

All that sounds utopian, but it all has to work around us humans, so Hyundai collaborated with the University of Texas at Austin to help city planners foster human-centered designs as future transportation options change how people interact within urban centers.

Not to be outdone, Bell also brought full-scale models of its unmanned Autonomous Pod Transport (APT) electric tailsitter and its latest air taxi design, the Nexus 4EX — an updated “4-ducted, allelectric, experimental” version of last year’s Nexus 6HX (“6 ducts, hybrid-electric experimental”). This version of Nexus more closely aligns with the Uber Elevate requirements and features larger wings for more efficient cruise. The full-size mockup was open to the public to enjoy and learn about the features of the vehicle. A “tour guide” in the pilot’s seat educated visitors on the design of the cockpit, the flight controls and the progression to automated flight. The line for this part of the display was never short.

Bell also displayed their vision of a three-dimensional future, with a miniature Smart City built from LED display panels providing an animated view of a city including traffic and pedestrians. This model highlighted the application of Nexus air taxis and APT cargo delivery vehicles providing valuable services to a bustling urban center. The Nexus and APT vehicles were represented by actual flying quadcopters that were operating autonomously with oversight control from a platform above the city, with coordinated movements across town, including weather delays (yes, thunder rumbled across the city fairly regularly). Operators on the control platform ensured clean airspace for each vehicle with coordinated movement, especially since the quadcopter drones are particularly sensitive to the airflow generated by the other demonstration vehicles.

“With a focus on the passenger experience, we revealed the technology and the vehicle that will revolutionize transportation in cities at CES 2019; this year, we’re demonstrating what governing, operating, working and living in a smart city will look like,” said Mitch Snyder, Bell President and CEO.

The demonstrations varied from air taxi services and drone deliveries to emergency medical and public safety applications. All of the movements were coordinated through the Bell AerOS MaaS application demonstration, which would provide air taxi, air cargo and fleet management tools for Bell’s air vehicle fleet. The Smart City model was realistic enough to provide simulated traffic congestion, accidents and pedestrians crossing the street unexpectedly, and when an emergency vehicle landed nearby, simulated pedestrians would gather to watch the action. Quite impressive.

Ground or Aerial: Which Will Win Autonomy?

There were other vertical flight activities happening at CES too. Uber’s Wyatt Smith, Bell’s Scott Drennan, NASA’s Parimal “PK” Kopardekar and the US Federal Aviation Administration’s (FAA) Jodi McCarthy participated on a panel discussion entitled, “Ground or Aerial: Which Will Win Autonomy?” Other panelists included Robin Lineberger from Deloitte, Hasan Ikhrata from the San Diego Association of Governments and Russell Laughlin from Hillwood.

Smith and Drennan both agreed that Urban Air Mobility (UAM) would start with pilots in the front and transition to autonomous flight when the technology is ready and provides a level of safety improvement. Implementing automation in the third dimension solves some of the problems that are inherent to ground-based autonomy, such as predetermined routes with defined actions for evasive maneuvers, along with fewer abnormal event occurrences (such as children running into the street).

All the panelists agreed that this vision of the future involves more than just the vehicles and must include communities in the process to be successful. McCarthy pointed out that the FAA focuses on safety, saying that it is the first and last thought every member of the FAA has when considering UAM and its integration into the airspace and communities.

Kopardekar highlighted that NASA is accelerating technology development with a three-pronged approach. First, by funding the NASA UAM Grand Challenge to demonstrate and develop the technology required for the market. Second, by providing research and guidance on airspace integration, including autonomy, for medium density operations. And finally, by establishing working groups to provide outlets for innovative
collaboration.

Each panelist provided insight into their role in the ecosystem, such as Drennan who highlighted that Bell — although an Uber Elevate partner — has developed their own network system, AerOS, to provide services for networks and fleet. AerOS manages vehicle performance, provides vehicle/fleet health information, informs the operator of maintenance actions, and, of course, provides a ride-sharing/scheduling platform that will not compete directly with Uber.

McCarthy highlighted that the FAA, as a regulatory body, may slow the industry advancement in the name of safety, but the move to performance-based standards certification from prescriptive rules will enable system providers more flexibility and should speed up the process. The ultimate goal is a safe, integrated system for UAM and on-demand mobility (ODM). The panel discussed the concept of ODM, and all of the panelists quickly pointed out that point-to-point ODM air transportation is still far into the future.

The panel quickly highlighted the issue of community noise during the discussion, but more in passing. From the FAA perspective, McCarthy pointed out that operators need to engage with community leaders before making any real plans for service. Helicopter noise as it stands today is often perceived and based on operational density or changes to flight patterns, which could be addressed through good communications with the local community. Drennan and Kopardekar pointed out the eVTOL noise profiles will be radically different from helicopter noise, at a lower decibel level, and have a very different sound. Ultimately, if the promise of accessibility, lower emissions and shorter commutes for all is realized, it will lead to greater acceptance by the general public.

Australian startup Pegasus International brought their version of an actual flying car (a roadable aircraft) to CES. While this vehicle did not elicit the same mass media coverage as Hyundai and Bell, it is an innovative approach to UAM just the same. In fact, this impressive vehicle was tucked away in a corner of the exhibit hall and not brightly displayed like the eVTOL darlings from Hyundai and Bell.

Pegasus General Manager Jacky Young said the vehicle is going through certification and is accepting pre-orders for both configurations. Young pointed out that the conversion from driving to flying happens automatically at the touch of a button — no manual conversion — and then back to driving after landing. Ultimately, Pegasus wants to join the air taxi space with an 11-seat design that would provide a service similar to Uber Elevate.

Returning to CES was VFS member NFT, Inc., showing its Aska drive-fly vehicle concept. NFT chairman and cofounder Guy Kaplinsky noted that the hybrid-electric vehicle is capable of vertical or short takeoff and landing (VTOL or STOL). Booth visitors had the opportunity to try a working flight simulator to NFT’s artificial intelligence sensor fusion platform, which “will enable 360-degree real-time intruder detection (other aircraft, drones, birds…), optimized by artificial intelligence.” This technology is the foundation for the company’s full autonomous flight system in the future.

While CES is known as the venue where the electronic gadgets are presented to the world, for the past four showings — beginning with the EHang 184 in 2016 — the event has been upstaged by major eVTOL program announcements that have provided the aerospace industry with a much-needed positive image as innovators in a tech-dominated world.

More VFS photos from CES can be found on the Vertical Flight Photo Gallery at gallery.vtol.org/album/1TS8