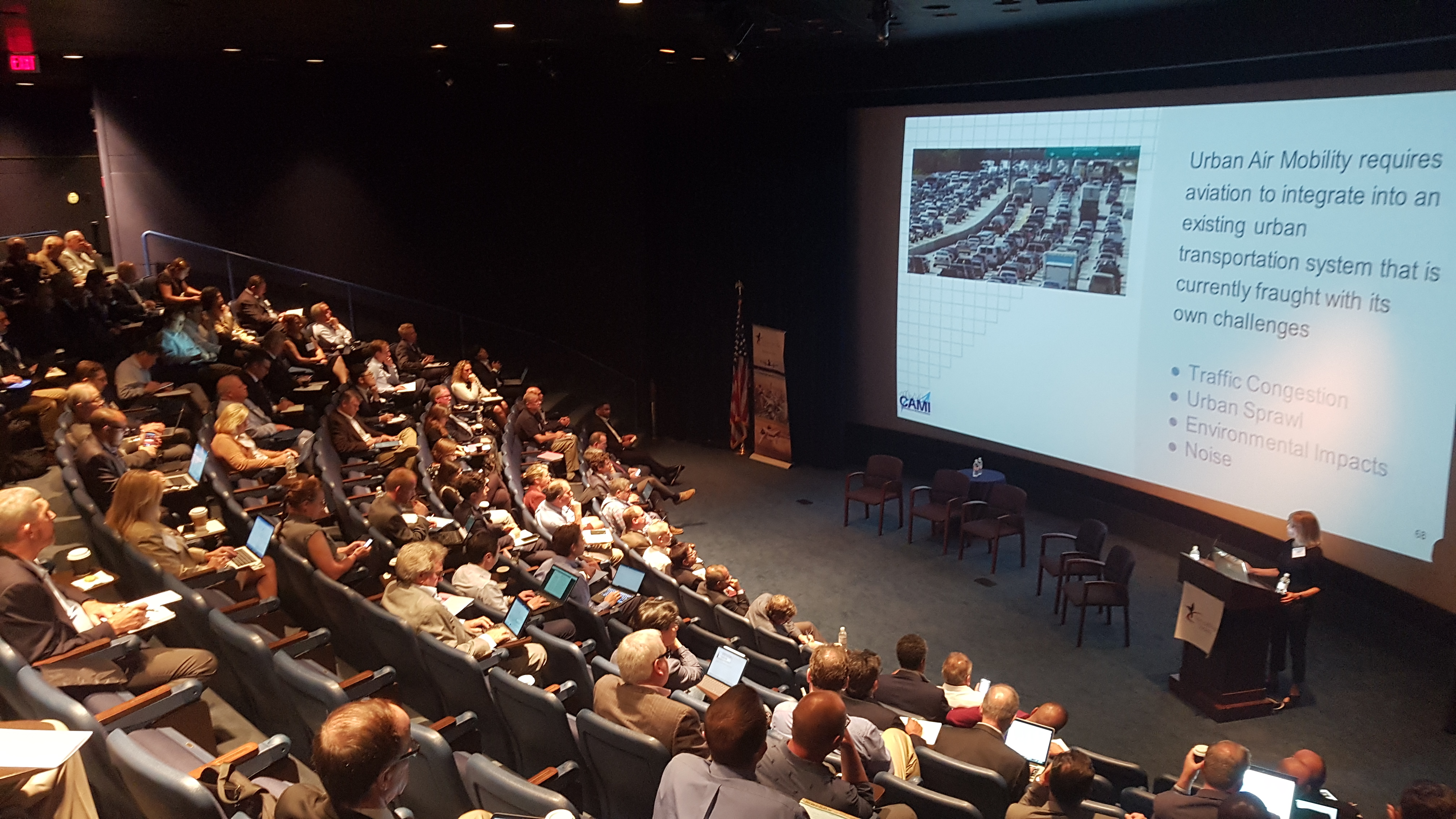 On Sept. 10–12, the Vertical Flight Society hosted its first workshop on the defining challenges of electric vertical takeoff and landing (eVTOL) aircraft for urban air mobility (UAM) missions. Held at the US Navy Memorial Visitor Center in Washington, DC, this three-day meeting worked to identify the foundational elements needed to support this growing industry beyond the aircraft technology development, such as infrastructure, air traffic management and system safety. Importantly, this workshop highlighted the activities of other key organizations in order to identify gaps and overlaps in development to ensure an efficient and successful “Electric VTOL Revolution” — the transformative effect of large-scale operation of eVTOL vehicles across society. (Presentation slides for most of the speakers are linked from www.vtol.org/dc).

The workshop had three objectives:

With the help of VFS volunteers from industry, academia and government, the workshop featured some 50 speakers representing various parts of the eVTOL community, including heliport/vertiport design, infrastructure standardization, building codes, electrical grid power supply, weather, air traffic control, unmanned systems, acoustics, passenger experience and cyber security, as well as various technical standards, and advocacy and regulatory organizations. In addition, officers from the White House Office of Science and Technology Policy (OSTP) highlighted the Trump Administration’s support of eVTOL research and development, which had been published days before the meeting (see below, “White House Supports eVTOL”).

A driving factor in organizing the workshop was educating the US Federal Aviation Administration (FAA) on activities that are already happening in the industry and highlighting the concerns and challenges the industry is facing moving toward passenger service. One of the key areas identified is the lack of consistency in design guidelines and oversight for heliports, which are being considered as the guidance starting point for vertiports. While there are standards that the FAA currently enforces for public-use heliports (specifically those that have received FAA Airport Improvement Planning funding), 99% of the facilities in the US are private-use. Federal guidelines are not mandatory for private-use heliports (unless so required by the state or local municipality) and often do not meet the recommended minimum standards.

The basic infrastructure requirements for flying in and around urban areas do not yet exist, and this market will require more specific capabilities for operation, such as localized weather reporting, defined routes and updated approach and departure paths. The current air traffic management system is incapable of supporting hundreds, let alone thousands, of low-altitude vehicles flying in close proximity, especially with other commercial traffic (such as delivery drones) incorporated into the same airspace.

Of course, public perception will be key in the adoption of these vehicles and three important aspects — accessibility, noise and system safety — will shape that perception. For UAM to be accessible to the general public, not just the elite, local municipalities are more likely to engage and encourage development of UAM into their transportation systems. Minimizing vehicle noise will be critical to ensure that vertiports achieve public acceptance and traffic routes are maintained and utilized for maximum economic effect. Finally, the vehicles must be operationally safe and not triggering incidents where significant damage is caused by the vehicle … or worse, passenger or bystander fatalities.

The 140+ participants at the workshop were diverse and engaged, producing many thought provoking questions and in-depth discussions focused not only on the challenges ahead but also potential paths towards the solutions needed.

The feedback from the attendees, and particularly the FAA was very positive. So positive, in fact, that VFS is scheduling a follow-on workshop in March in support of the FAA Technical Center in Atlantic City, New Jersey. This two-day workshop will focus specifically on infrastructure and facilitate discussions between industry, government and associations to increase understanding and progress toward both defining and refining infrastructure standards at the federal, state and municipality levels. Details are at www.vtol.org/infrastructure.

GENERAL GUIDANCE FOR FY2021
For FY2021, the five R&D budgetary priorities in this memorandum ensure that America remains at the forefront of scientific progress, national and economic security, and personal well-being, while continuing to serve as the standard-bearer for today’s emerging technologies and Industries of the Future….

2. American Leadership in Industries of the Future
The Trump Administration continues to prioritize the technologies that power Industries of the Future (IotF). These industries promise to fuel American prosperity, improve quality of life and national security, and create high-paying jobs for American workers. Sustained, strategic R&D investment in these emerging technologies and the materials, manufacturing, and computing that support them will advance American S&T leadership in the short term and catalyze discoveries and innovations that will shape the global S&T landscape for the decades ahead…

Advanced Communications Networks and Autonomy: Departments and agencies should support the development and deployment of advanced communications networks by prioritizing R&D consistent with the National Spectrum R&D Strategy. They should prioritize R&D to lower barriers to the deployment of surface, air, and marine autonomous vehicles with a focus on developing operating standards, integration approaches, traffic management systems, and defense/security operations. Departments and agencies should prioritize R&D that enables electric vertical-takeoff-and-landing and civil supersonic aircraft, including for type certification, the creation of over-land supersonic flight noise standards, and low-sonic-boom aircraft research….

The White House Office of Science and Technology Policy (OSTP) and the National Science and Technology Council (NSTC) are responsible for the interagency coordination and development of technical reports, strategy documents, and policy memos concerning various scientific and technological topics of importance to the nation.

Over the past year, several aerospace organizations, including the General Aviation Manufacturers Association (GAMA) and VFS, met with and have been encouraging OSTP to support this prioritization in US government research and development.