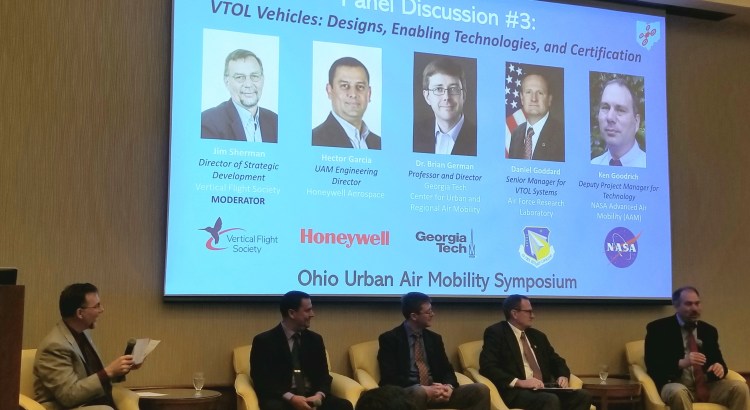 VFS members, consultants and staff were featured at the first OSU Urban Air Mobility Symposium intended to feature activities in Ohio and increase the aerospace prominence of the Buckeye State.

On Feb. 27, experts from around the country descended on Columbus, Ohio, for the Inaugural Urban Air Mobility (UAM) Symposium at The Ohio State University. With some 200 attendees representing academia, government and industry, the event was a major success and looks to be a catalyst for the future of aerial mobility in the state of Ohio. George Valcarcel, of the OSU Battelle Center for Science, Engineering and Public Policy, was symposium’s lead organizer and master of ceremonies.

The conference keynote speaker was Dr. John Langford, founder of Aurora Flight Sciences (now part of Boeing), with his presentation, “Rapid Prototyping of Robotic Aircraft and Its Application to UAM.” Langford’s keynote highlighted electric aircraft benefits and challenges, particularly that electric propulsion is not a drop-in technology, but it does add dimensions to the design space that could provide value to certain missions. Langford emphasized Aurora’s efforts in developing electric flight and UAM, especially its path to becoming a partner in the Uber Elevate initiative. He pointed out that the licensing process for drone operators will fundamentally change aviation, in conjunction with advancements in automation and autonomy. The development of automation/autonomy will be the key to gaining economic viability for UAM.

The conference featured some fascinating discussions, with VFS staff, individual members and corporate members on four of the five panels.

The first panel of the day, “Defining Urban Air Mobility (UAM) and the Opportunity for Ohio,” featured Ohio-native Jonathan Hartman from Sikorsky, a Lockheed Martin Company, along with moderator Brian Garrett-Glaser from Avionics International and panelists Kofi Asante of Elroy Air and Edgar Valdez of UPS Flight Forward. As highlighted in the panel, “UAM” is a confining term that does not represent everything that is incorporated within the industry — cargo/package delivery, emergency/medical response/delivery, and that the helicopter still plays a significant role in UAM.

The second panel, “Operational Challenges for UAM: Airspace Integration, Cyber-Security and Data Privacy,” was moderated by Dr. Jim Gregory from OSU. The panel focused on the development of a traffic management system, from hardening the system against cyberattacks and spoofing, to privacy concerns, and intermeshing the networks with each other and National Airspace System management.

The third panel, “VTOL Vehicle Designs, Enabling Technologies, and Certification Process,” was moderated by VFS staff member Jim Sherman, and featured panelists Brian German from Georgia Tech, Ken Goodrich from the NASA Advanced Air Mobility (AAM) project, Hector Garcia from Honeywell Aerospace, and Daniel G. Goddard from the Air Force Research Laboratory. The panel defined what electric vertical takeoff and landing (eVTOL) is and what technologies will enable the development of the industry.

The fourth panel, “Infrastructure Planning, Zoning, and Financing,” featured VFS Advisor for Infrastructure Rex Alexander, along with Danielle Rinsler of Uber Elevate. This panel discussed the current state of infrastructure for VTOL, and what will be required for eVTOL and other forms of UAM/AAM.

The final panel of the day, “Ohio’s Role to Play in Advancing and Integrating Air Mobility into Our Communities,” which outlined the steps that Ohio must take to become the leading state for UAM/AAM development and implementation.

Videos of the program can be found on the OSU UAM website: https://u.osu.edu/ohiouamsymposium.