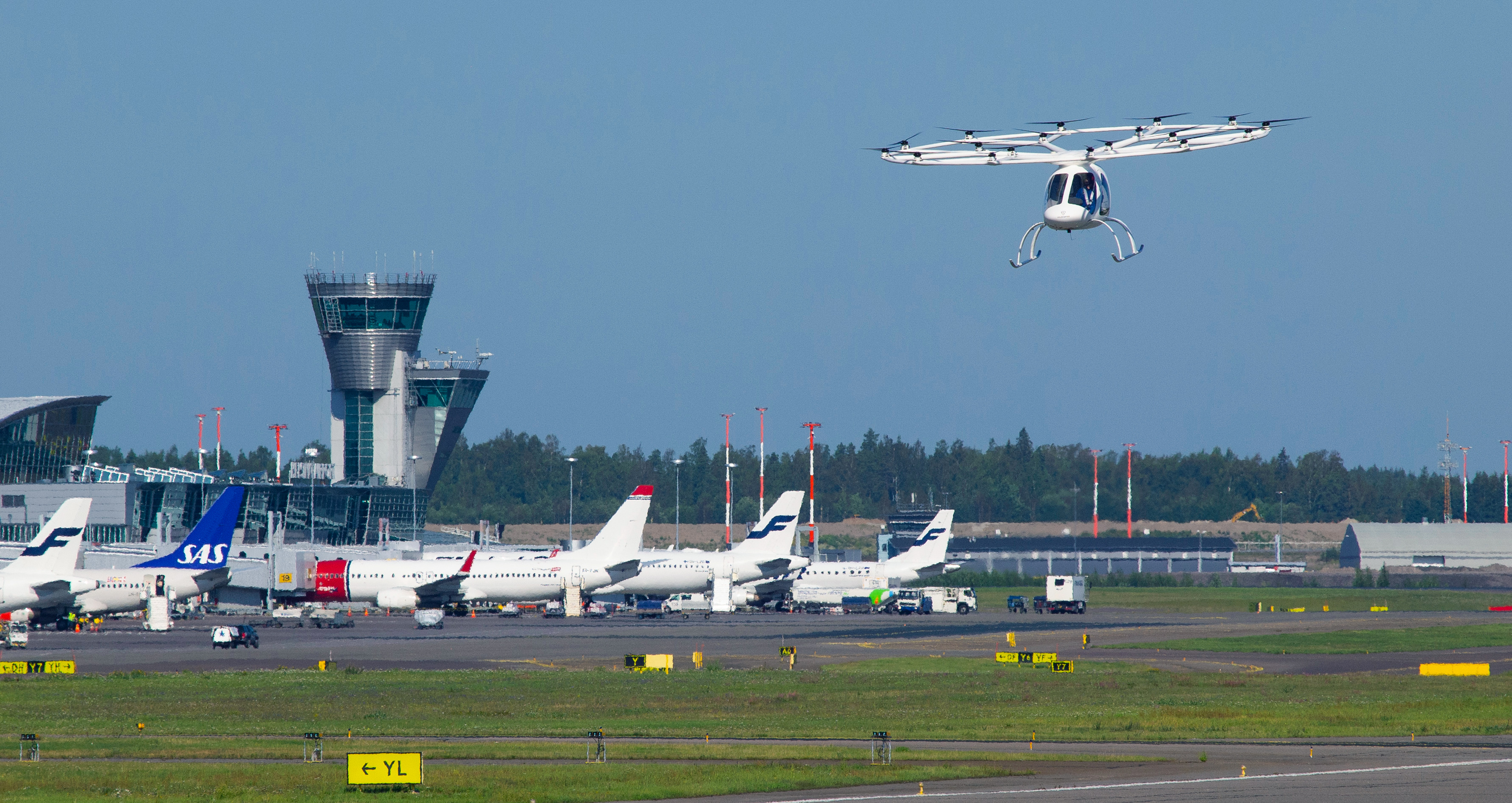 Over the past several months, Bruchsal, Germany-based Volocopter GmbH has achieved a series of firsts and major accomplishments in clearing the way for commercial UAM operations.

On Aug. 21, Volocopter revealed its fourth-generation electric vertical takeoff and landing (eVTOL) design, the VoloCity, intended to be its first production aircraft. The company says that the VoloCity has been designed to meet the safety standards specified by the European Union Aviation Safety Agency (EASA) SC-VTOL regulation (see www.eVTOL.news/ EASA) and incorporates user feedback, as well as test data from all previous Volocopter generations, including more than 1,000 test flights.

With a calculated range of 22 miles (35 km) and an airspeed of 68 mph (110 km/h), the VoloCity is designed to serve as an ondemand, inner-city air taxi. Like Volocopter’s previous models, the VC200 and 2X, the VoloCity is powered by 18 electric propellers and has seats for two passengers. However, the VoloCity has a number of refinements, including increased flight efficiency through more aerodynamically shaped propeller support beams and a newly introduced stabilizer for increased lift and additional stability in forward flight.

On Aug. 29, Volocopter performed a flight at the Helsinki International Airport with its 2X demonstrator, successfully integrated into both the Air Traffic Management (ATM) and Unmanned Aircraft System Traffic Management (UTM) systems. This demonstration was conducted within the Single European Sky ATM Research (SESAR) program to show how ATM and UTM systems can act in combination to enable safe and efficient Urban Air Mobility (UAM) operations in urban environments, including airports.

Volocopter announced on Sept. 9 that it had signed the first closing of its Series C funding round, which is being led by Zhejiang Geely Holding Group (which had previously acquired Terrafugia), followed by new and existing investors from Europe, North America and Asia. The new funds will be used towards bringing the VoloCity aircraft to commercial launch within the next three years. This closing increases the total capital that Volocopter has raised to $94M (€85M). Volocopter remains in discussions with additional investors for a second closing before the end of the year. Geely and Volocopter have also entered into a joint venture to bring UAM to China.

Meanwhile, Volocopter flew its 2X eVTOL demonstrator in Stuttgart at the Mercedes-Benz Museum on Sept. 14. This was the first large-scale public demonstration of an electric VTOL aircraft in front of thousands of spectators. The flight was a highlight of the two-day event “Vision Smart City — Experience the Mobility of the Future Today,” which was part of a research project by the Technical University of Stuttgart to examine the social acceptance of air taxis. The Minister-President of the state of Baden-Württemberg, Winfried Kretschmann, experienced this first European urban flight of an eVTOL together with the Chairman of Daimler AG, Ola Källenius; the CEO of Volocopter, Florian Reuter; and Thomas Strobl, Minister of the Interior, Digitalisation and Migration for Baden-Württemberg.

As part of a feasibility study launched at the end of 2018 by ADAC Luftrettung (air rescue), Volocopter flew its 2X in a staged rescue operation on Sept. 26. The real-life operation was staged end to end, from an alert at the ADAC Luftrettung helicopter emergency medical services (HEMS) base to the emergency treatment of the mock-patient on the scene. ADAC is studying the concept because if eVTOL aircraft like the Volocopter 2X are much cheaper and easier to operate than helicopters, it would facilitate a larger number of aircraft that could deliver medical personnel to where they are needed with much greater speed.

On Oct. 21, Volocopter and Skyports, Ltd. unveiled what they called “the world’s first full-scale air taxi vertiport” at the Intelligent Transport Systems (ITS) World Congress in Singapore. According to Volcopter, “The VoloPort is designed to offer an exceptional Volocopter and Skyports exhibited their VoloPort infrastructure prototype in Singapore on Oct. 21. (Photo by Nikolay Kazakov for Volocopter / Skyports) passenger experience, using the most modern safety and security processes. Its modular design can be easily adapted to fit rooftops, railway stations, parking lots and other metropolitan locations. It will accommodate a wide range of electric air taxis, serving business travelers, tourists and anyone else fed up with sitting in traffic.”

Volocopter and Skyports also announced that they will continue their partnership with the aim of introducing commercial air taxi services in Singapore and beyond.

In support of its expansion plans, Volocopter opened an office in Singapore in January 2019 and has started to build up a local team. Skyports followed suit in September 2019 and will be hiring full-time local staff in early 2020. Based in London, Skyports also develops, implements and operates end-to-end drone deliveries globally.

Volocopter made its first manned flight over Singapore’s Marina Bay on Oct. 22. The Volocopter 2X flight was just under a mile (1.5 km) and lasted for two minutes at an average cruising height of 130 ft (40 m).

This was the final demonstration of a demanding test series to verify and validate the ability of Volocopter air taxis to fly over the area. Government authorities including the Singapore Ministry of Transport (MOT), the Civil Aviation Authority of Singapore (CAAS) and the Economic Development Board (EDB) supported Volocopter in this testing phase and plan to continue to do so in the future. “This flight kicks off Volocopter’s efforts to bring commercial air taxi services to Singapore,” the company stated.

While each of these many accomplishments is impressive in its own right, together they represent significant progress in bringing the Volocopter VoloCity to market for air taxi and other operations.

For more on Volocopter and some 215 other electric VTOL aircraft, see the VFS website: www.eVTOL.news.