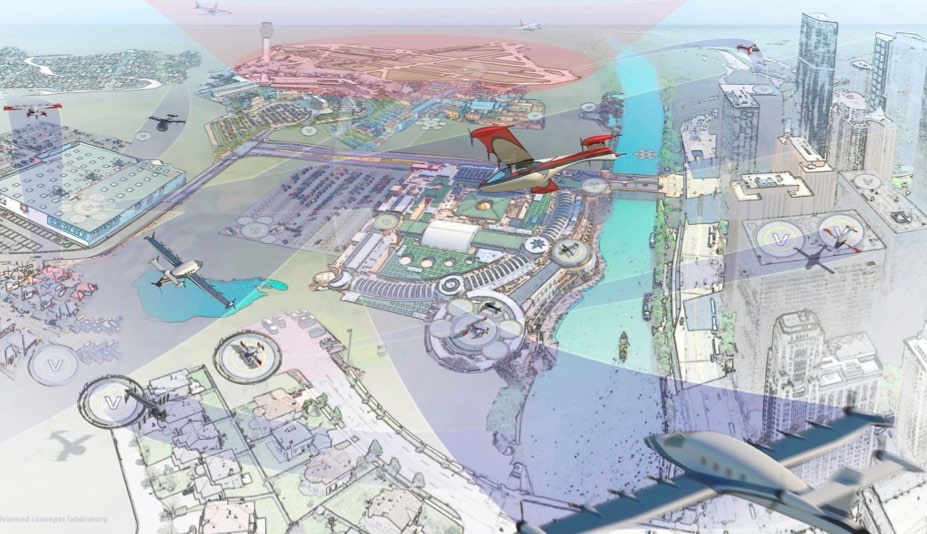 One approach to satisfying these expectations is to develop air transportation systems that embody combinations of on-demand, electric and hybrid-electric propulsion, and vertiport- capable configurations and designs. The desire to effect this change has compelled a group of scientists, engineers and visionaries in industry, government and academia to tackle the technical, regulatory and cultural acceptance challenges of democratized vertical flight. Recent technological, business and societal developments have made the dream closer to a reality, but a stakeholder consensus was desired to increase the likelihood of success.

To facilitate this change, AHS International has since 2014 been leading a series of workshops — with NASA, the American Institute of Aeronautics and Astronautics (AIAA), and SAE International — on Transformative Vertical Flight (TVF). The objective is to build a community of aerospace professionals that includes technical, regulatory and business elements in order to explore the potential of new forms of air transportation systems.

The primary means for engaging the TVF community has been a series of workshops and four newly formed working groups focused on developing a community consensus-based roadmap. The roadmap is intended to be a creditable description of how TVF systems could evolve over the next decade. Roadmaps are useful tools to inform stakeholder decisions, guide investment strategies and fill the gaps necessary to achieve successful new aviation products.

The outcome of the first TVF workshop, held in August 2014 in Arlington, Virginia, was to identify the existence of a multi-disciplined community interested in this topic and to achieve a consensus among the participants that opportunities to establish further collaborations in this area were warranted. The attendees resolved to conduct a series of workshops — augmented by online virtual technical seminars — to strengthen the TVF community and to continue planning for advocacy and collaboration.

The second workshop, held in August 2015 at the NASA Ames Research Center, Moffett Field, California, brought together interested parties from government, academia and industry, with the diverse backgrounds and experience necessary to establish an intellectual framework that could serve as a foundation for a preliminary roadmap. The initial framework was structured around the four basic questions — who, what, why and how — that need to be addressed when justifying any new endeavor.  They were represented by the initial roadmap elements: operational concepts; technology challenges; regulatory and user requirements; and business/market opportunities. The workshop also provided an opportunity for information exchange facilitated by two dozen presentations and panel discussions given by engineers, scientists, visionaries, electric propulsion and energy storage researchers and developers, innovators, small startups and large aerospace companies. The proceedings were published as NASA report CP-2016-219141.

The third workshop, held in September 2016 in Hartford, Connecticut, built on the work of the previous two by soliciting expert opinions from the participants on the work and timeframes needed to transform air transportation consistent with their expectations for the evolution of TVF. These un-vetted suggested activities were used to populate an initial notional roadmap that could serve as a starting point for further development. This workshop was held in conjunction with joint AHS-AIAA-SAE-Royal Aeronautical Society (RAeS) International Powered Lift Conference (IPLC) — itself part of the SAE 2016 Aerospace Systems and Technology Conference — to facilitate additional technical interchange through dozens of related technical presentations.

At this workshop, Uber Technologies also revealed its intent in “Fast-Forwarding to a Future of On-Demand Urban Air Transportation,” by assisting in the development of an ecosystem of urban electric VTOL (eVTOL) aircraft, including collaborating with cities, vehicle manufacturers, suppliers and infrastructure development partners. Although it represents only a segment of the overall TVF domain, Uber’s eVTOL vision has helped to add momentum to the AHS-led initiative.

The fourth and most recent workshop was held with the AIAA Aviation 2017 Forum in June 2017 in Denver, Colorado; like the previous workshop, it leveraged the co-location of a major technology conference to keep the participants abreast of major technical, business and regulatory developments in TVF. A workshop breakout session provided an opportunity for the members of the newly formed TVF Roadmap Development Working Groups (WG) to interact face to face and become familiar with virtual collaborative processes that their respective groups employ. The four TVF WGs are each responsible for the maturation of the four mission-oriented elements of the restructured roadmap. The four groups are: WG1 — Private/Recreational Vehicles, WG2 — Commercial Intra-city (short range), WG3 — Commercial Inter-city (longer range) and WG4 — Public Services.

The fifth TVF workshop will be part of the 2018 AHS International Technical Conference on Aeromechanics Design for Transformative Vertical Flight, Jan. 16–19 in San Francisco, California. This event will provide a forum to discuss emerging challenges of TVF vehicle concepts and configurations, and how they influence design methodologies and decisions. It will also serve as an opportunity for the TVF WGs to share their progress in the form of an updated TVF Roadmap. This workshop is expected to leverage the strong interest of the surrounding Silicon Valley VTOL development activities.

Each WG is starting with the un-vetted version of its mission element from the existing TVF Roadmap and is tasked with evaluating each of the existing activities for the purpose of reaching a consensus on the appropriateness of the activity. This involves group deliberations on each activity’s relevance, timing and dependencies on other roadmap activities. The outcome of their discussions will be the acceptance, modification, deletion or resequencing in time of each activity. They will also generate text that adequately describes each activity’s purpose and dependencies on earlier and later activities. The WG leads have the additional responsibility of reconciling modifications in their roadmap mission element with the other WG leads to ensure consistency across the entire roadmap. In order to maintain an aggressive schedule, the geographically dispersed WG members meet frequently using web-based virtual collaborative meeting tools, initially provided by NASA. The product of their efforts will be presented at the Fifth TVF Workshop in January and made available online.

About the Author
Michael Dudley started his 39-year career with NASA as a powered-lift research engineer, and has since contributed to a wide variety of aeronautics disciplines in positions up to the executive level.