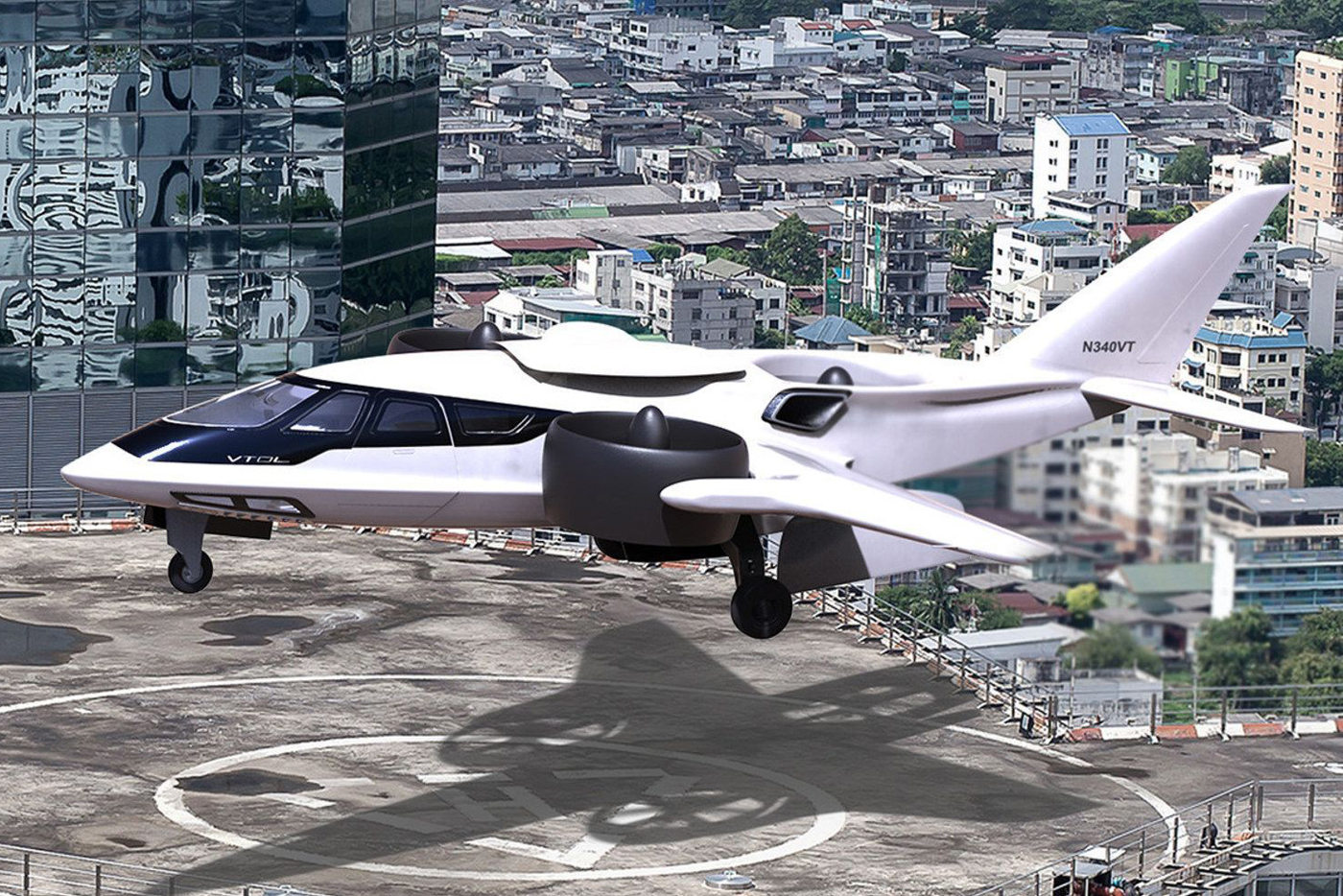 XTI Aircraft Company is playing the long game with the ongoing development of its TriFan 600 hybrid-electric vertical takeoff and landing (eVTOL) aircraft.

In the last year, the company — based at Centennial Airport near Denver, Colorado — refined the aircraft’s design, launched flight testing of its large-scale Proof of Concept (POC) vehicle, revitalized its funding program, partnered with a major engine maker, obtained two patents, strengthened upper management and now has a total of 81 orders for its unique aircraft. It is noteworthy considering how difficult it is for any start-up to move a cleansheet aircraft from conception to certification. XTI Chief Executive Officer Robert LaBelle addressed the various challenges and other news during a recent interview with Vertiflite.

He was candid when asked about having sufficient capital to support the program. “Half of my time is devoted to attracting investors and I expect that to continue for a couple of years.”

The TriFan 600 has been praised for its unique design. Yet XTI is first and foremost a business. Having all 81 orders realized would yield a “half-billion dollars in revenue,” the chief executive said.

Despite the challenges, XTI claims to have several advantages over other startups. Often, someone launches an aircraft company with some money, a keen interest in aviation, but very little experience in manufacturing and working with regulatory authorities in getting new aircraft certified. XTI has personnel that have worked on 30 different aircraft development programs, LaBelle said.

One thing is apparent. XTI is not waiting around for the phone to ring. The company refined the TriFan 600 wing to reduce weight and improve performance. XTI is banking on a 20% boost in improvement in cruise performance due to the redesign.

LaBelle declined to provide detailed flight test information, but he said that XTI is satisfied with initial power and hover tests of its POC. So far, the company has successfully tested the vehicle’s autonomous functions and ground control systems, including electric motors, the battery system, ducts, propellers, flight controls, electrical systems and instrumentation. Upcoming flights will test forward, wing-borne flight, as well as the transition phase between vertical and forward-flight modes.

XTI launched its novel crowdfunding initiative in August 2016 to attract new stakeholders and the company continues to sell shares of XTI for $1.50 on StartEngine.com. However, that’s only part of its funding. “We are continuing to raise capital under our Series B funding round of $25 million,” LaBelle said. Crowdfunding is part of the Series B initiative.

The company is continuing to talk with other potential backers. Importantly, if additional investments do come through, XTI will have a full-scale prototype available sometime in 2021, LaBelle said.

The company announced in August its plans to enter into arrangements with one or more “Alternative Trading Systems,” which would provide shareholders the option of offering their shares for sale on the secondary market. The shares won’t become tradable until XTI shutters its crowdfunding campaign, whenever that happens. In early December 2019, XTI extended its crowdfunding platform indefinitely.

In late July 2019, the program got a major boost when XTI announced that it selected General Electric’s Catalyst engine as the core of the TriFan 600 hybrid-electric propulsion system. Like the Tri-Fan 600, the Catalyst is a new clean-sheet design that is projected to reduce fuel consumption, thereby enabling longer flights and greater payloads.

“GE believes that parallel and series hybrid-propulsion systems, those that include a turbine gas generator to take advantage of the energy density of jet fuel, will lead to much more capable aircraft for both traditional and emerging markets,” GE Aviation’s Turboprops General Manager Paul Corkery said. GE Aviation has been developing hybrid-electric technology for large regional and narrow-body commercial aircraft, as well the general aviation market (with potential for eVTOL applications) for nearly a decade.

In the last year, XTI added experienced personnel to its roster. XTI Board Member Charlie Johnson, who was President of Cessna from 1997 to 2003, is now the COO of XTI. Johnson was the interim CEO of XTI following the 2016 death of Jeffrey Pino, XTI Vice Chairman (and former Sikorsky Aircraft President and VFS Chair of the Board), who was killed flying his P-51D Mustang.

XTI in 2019 secured two patents on the TriFan 600 in the expanding Asian market, which will help enable the company to expand globally. In December 2019, XTI announced it had received a utility patent from the China National Intellectual Property Administration (CNIPA) for the technology and configuration of the Tri-Fan 600. Earlier this year, the Japan Patent Office issued a similar patent on the aircraft.

Buffeting XTI’s plan to bring the 5,300-lb (2.4-metric ton) TriFan 600 to market by 2023 is the history of high operating expenses for VTOL aircraft for commercial or charter operations. Competition also is a factor to consider.

Although different in size and capability, and projected entry into the market, there will be the obvious comparison between the not-yet-built, six-seat TriFan 600 and the not-yet-certified, six-to-nineseat Leonardo AW609 tiltrotor.

LaBelle offered the following: “Price and operating costs are expected to be significantly lower for the TriFan 600, while range and passenger load are similar.” The company says the TriFan will have the speed, range and comfort of a luxury business aircraft and the ability to take off and land vertically, like a helicopter. It will travel at 300 kt (555 km/h), at 29,000 ft (8,800 m) with a range of up to 1,040 nm (1,930 km) with a short takeoff and landing.

While not offering a projected date for certification, Leonardo provided the following update to its tiltrotor program: “The first two production AW609 aircraft have entered the final assembly line at Leonardo’s facility in Philadelphia with an Advanced Flight Training Device almost complete and the first Full Flight Simulator now under construction.”

The new Training Academy in Philadelphia will be completed in 2020. And the AC4 Demonstrator is expected to fly shortly, Leonardo stated.

Another competitive threat to the TriFan 600 could come from some of the credible developers of eVTOL aircraft — more than 250 are now listed on the VFS website at www.eVTOL.news — though few are looking at aircraft as large as the TriFan 600.

At the 2019 National Business Aviation Association (NBAA) Business Aviation and Convention & Exhibition (BACE) in October, LaBelle told VFS that the TriFan 600 wouldn’t require new infrastructure for operations, such as a heliport. Nor would the aircraft require all-new regulations to achieve certification.

In December, LaBelle told Vertiflite that XTI is in discussions with a company on providing charter service using the TriFan 600. The news is somewhat surprising given the fact that the company has yet to build a full-sized prototype, much less a certified aircraft.

Asked if these negotiations were premature, LaBelle responded: “It may seem early, but some operators are anxious they will be preempted by competitors, so they are opting to get involved now.”

Despite the challenges of bringing a new aircraft to market, LaBelle remains unwavering in his support of eVTOL transports, the TriFan 600 particularly. “The market continues to recognize the value proposition of our unique and revolutionary airplane and its patented technology,” he said.

Vertical takeoff capability, combined with long-range and the speed and comfort of a business aircraft, and the quieter and cleaner hybrid-electric propulsion system will ensure the eventual success of the TriFan 600, he added.

Others too see the potential of civil eVTOL aircraft as commercial air taxis and business aircraft.

“In theory, this XTI aircraft checks a lot of boxes,” observed Ron Jackson, a principal with the Aviation Business Strategies Group, which follows the business aviation industry. “This design looks very promising and if it lives up to the hype and projected numbers, then there will probably be a market with other derivatives leading to scalable applications. Personally, I think electric aircraft are the wave of the future but there are a lot of hurdles to jump over.”

Robert W. Moorman is a freelance writer specializing in various facets of the fixed-wing and rotary-wing air transportation business. With more than 30 years of experience, his writing clients include several of the leading aviation magazines targeting the civil and military markets. He can be reached at rwmassoc325@gmail.com.