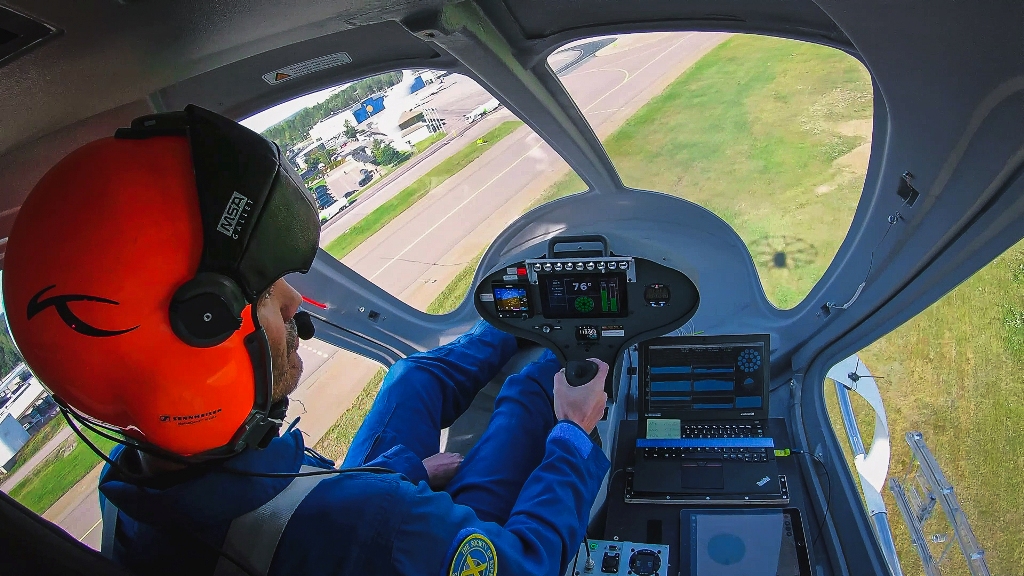 With a goal of launching its first electric vertical takeoff and landing (eVTOL) aircraft services in a number of cities in the next five years, urban air mobility (UAM) pioneer Volocopter has formed a strategic partnership with global aviation leader CAE to develop, certify and deploy an innovative eVTOL pilot training program. The companies made the announcement on July 8, 2021.

The German eVTOL manufacturer is currently developing a family of eVTOL aircraft to transport both people (VoloCity, VoloConnect) and goods (VoloDrone), with the two-seat, 18-propeller VoloCity well into its certification program with the European Union Aviation Safety Agency (EASA) and plans to launch first services in time for the 2024 Olympics in Paris. Volocopter is one of the very few eVTOL manufacturers that has actually made manned flights of its aircraft for the public and media in several urban areas.

CAE has always been a business at the nexus of aviation and electronics (it was founded as “Canadian Aviation Electronics” in 1947) which is particularly applicable today. The company is committed to expanding its global training network to support Volocopter’s growth and global pilot training. The Montreal-based Canadian company expects to invest up to $40M to meet Volocopter’s projected pilot demand in the early years of operation.

This is the first pilot training contract CAE has secured with a leading eVTOL manufacturer, and the company plans to use advanced technologies, such as artificial intelligence (AI), virtual reality (VR), mixed reality (MR) and data analytics to help Volocopter establish safe and efficient UAM operations.

"As we scale our UAM services in cities around the world, specific pilot training and qualification for our Volocopters will be an important element. We are proud to be partnering with CAE, who have a track record in developing best-in-class, innovative pilot training solutions for new aircraft programs. It will greatly benefit Volocopter's entry-into-service timeline and scale," said Florian Reuter, CEO of Volocopter. "We are excited about CAE's endorsement and look forward to collaborate as partners focused on combining future-oriented technologies to ensure aviation safety."

CAE will be deploying training equipment and instructors in parallel with Volocopter’s growth. As part of the agreement, Volocopter will purchase a simulator from CAE to be used in its pilot training program certification. CAE will create new, student-centric courseware, specifically designed for the pilots of the future as Volocopter’s courseware provider and will also offer pilot trainees customized resources that enable faster, more efficient pilot training, according to the CAE news release.

"As a high-technology company and the industry leader in pilot training, we continuously look at providing solutions that make the world a safer place," said Nick Leontidis, CAE's Group President, Civil Aviation Training Solutions. "We are committed to supporting Volocopter's inspiring vision and we look forward to leading in the design of UAM pilot training that prioritizes safety of operations through our data-driven solutions, world-class pilot training experience, and longstanding relationships with civil aviation authorities across the globe."

A lot of attention has been devoted by the emerging UAM and advanced air mobility (AAM) on electric propulsion, energy sources and infrastructure over the past few years, but CAE believes that the industry as a whole needs to give a lot more attention to eVTOL pilot training and the timelines required to meet entry into service targets.

That’s a major reason why CAE released a White Paper on June 1 titled “Pilot Training for Advanced Air Mobility” that highlights the many challenges that must be addressed aircraft developers, training providers, regulators and others (see "CAE Report Sounds Alarm on Pilot Training," Vertiflite, July/August 2021).

Courtney said that the industry is at an inflection point in aviation with an unprecedented need for a sizeable eVTOL pilot workforce and new disruptive training processes.

It’s expected that AAM will create an additional surge in demand for pilots with some estimates suggesting that 60,000 pilots will be needed between 2024 and 2028, which roughly translates into new 15,000 eVTOL pilots a year or 1,250 pilots a month assuming linear pilot growth.

CAE expects that “the initial AAM pilot cadre will consist of experienced commercial pilots from both the fixed and rotary-wing aviation communities … [but] eVTOL pilots will need additional skill sets to meet the unique capabilities, designs and operational environments of eVTOL aircraft.” And “pilots of eVTOL aircraft may also find a pathway into airlines, business aircraft, or possibly helicopters, opening new opportunities for aviation careers.”

A video of their presentation can be viewed on the VFS YouTube Channel.

CAE is well positioned to support Volocopter’s ambitious goals. It operates the world’s largest civil aviation training network with a global fleet of more than 170 aircraft, more than 60 training locations and more than 300 full flight simulators (FFS). The company was training more than 135,000 civil and defense pilots annually before the COVID-19 pandemic triggered a collapse in air travel.

The company has a 70-year history of developing pilot training programs and training systems for new commercial, military, business and general aviation aircraft and helicopters.

On May 12, CAE announced it will support Jaunt Air Mobility in developing the company’s aircraft systems integration lab in Montreal, Canada. As part of the agreement, CAE and Jaunt Air Mobility intend to build an engineering simulator that will accelerate cockpit design and system development, and will reduce the airworthiness flight test time.

CAE can also draw on the technological innovations it has deployed by its large and diversified military air crew training business, which includes remotely piloted aircraft (RPA).

Last week, CAE became the world’s largest military aviation training company when it closed its $1.05B acquisition of L3Harris Technologies’ Military Training business on July 2, which includes the US Army’s Flight School XXI (FSXXI) program at the Army’s Aviation Center of Excellence at Ft. Rucker, Alabama.