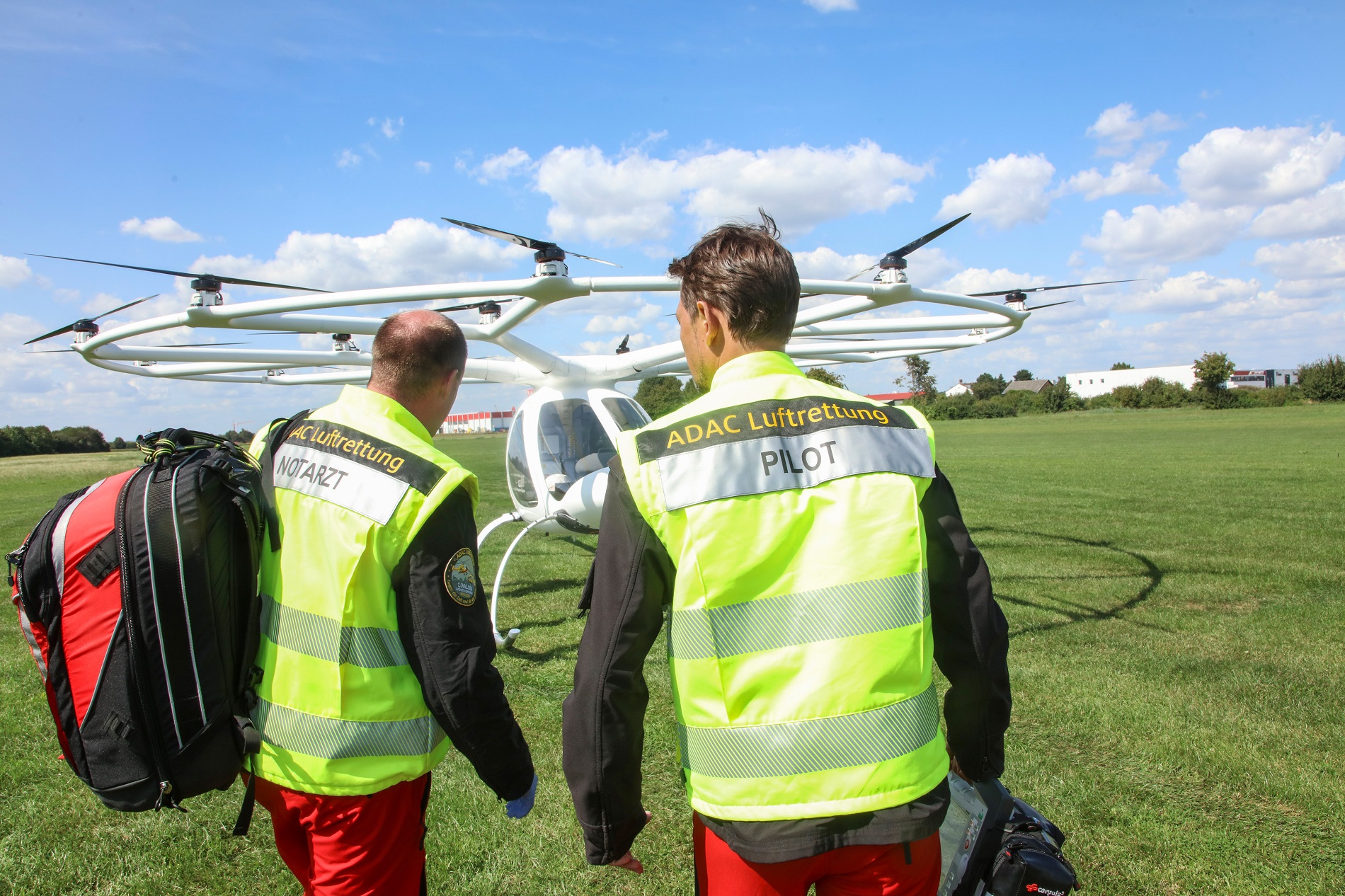 ADAC Luftrettung celebrated 50 years of operations in 2020, having already flown its one millionth HEMS mission the year before.

When German traffic deaths spiked in the late 1960s, doctors determined that many would have survived if they had received quick emergency attention. The all-important “Golden Hour” is where a victim of trauma has more chance of recovery when treatment is immediately applied during those 60 minutes.

After some experiments using a helicopter for emergency rescue in 1968, the first ADAC Luftrettung station, Christoph 1 in Munich, was opened two years later. The first aircraft was a single-engine Bell 206, but ADAC soon moved to multi-engine operations, beginning with the Messerschmitt-Bölkow-Blohm (MBB) Bo 105. Over the decades, ADAC has used a varied fleet, with the Bo 105, MD Helicopters MD 900/902 Explorer and briefly even the Mil Mi-2 Hoplite (after the unification of Germany in 1990).

ADAC has a major network of bases across the country with a fleet of around 50 helicopters, comprising predominantly twin-engine Airbus Helicopters H135 (EC135P2/P3) and H145 (EC145 and EC145T2/BK117D2), as well as some legacy MBB BK117C1 helicopters. Each aircraft is named “Christoph,” after the patron saint of travelers, St. Christopher. One mission this January involved a patient giving birth to a healthy baby boy onboard Christoph Europa 2 — an H135 (EC135P2) based in the town of Rheine in northwest Germany — en route to the hospital.

In neighboring Austria, ADAC — in cooperation with its counterpart, Österreichische Automobil, Motorrad- und Touringclub (“Austrian Automobile, Motorcycle and Touring Association”), with its ÖAMTC Flugrettung (“Air Rescue”) — operates the Airbus Helicopters H135 (EC135T2) from Suben in Upper Austria. Its variety of missions range from response to trauma, accidents and incidents, inter-hospital transfers, blood transport and the urgent delivery of medicines to patients.

While ADAC Luftrettung and DRF Luftrettung are the largest commercial HEMS operators in the country, they are not the only ones. While they both operate light and medium twin-engine rotorcraft, a smaller helicopter is flown by a smaller HEMS operator in the rural region of Rostock, in the Mecklenberg-Vorpommern state on the north coast of the country. In 1995, the local ambulance service, Ambulanz Millich explored the idea of a helicopter emergency response to serve the remote community. A year later, in January 1996, local operator Heli-Flight from Reichelsheim provided a piston-powered Robinson Helicopter R44 Raven II to Ambulanz Millich. Now, for a quarter of a century, the small, yellow R44 Raven II is a welcome sight in the community, ferrying doctors and other medical personnel to those in need.

The Bundespolizei Flugdienst’s primary role is airborne law enforcement and border patrol, with secondary search and rescue (SAR), medical evacuation (medevac) and HEMS missions. Both the Super Pumas and Dauphin 2s carry rescue hoists, medical equipment and stretchers, while the H135 fleet is divided between the dedicated blue-and-white-striped airborne law enforcement patrol and the orange-red HEMS aircraft. As with ADAC Luftrettung and DRF Luftrettung HEMS helicopters, it is not unusual to see the orange-red H135 across the border in Austria.

Last but not least, the Bundeswehr (“German Armed Forces”) Heeresflieger (“Army Aviation”) provides SAR and HEMS with the legacy single-engine Bell UH-1D Huey (manufactured under license by Dornier) and the newer Airbus Helicopters H145M LUH SAR (“Light Utility Helicopter Search and Rescue”). The H145M LUH SAR helicopters are gradually replacing the Bell UH-1Ds. These operate on the similar principle as the US Army medevac helicopters in regular, reserve and National Guard service under the Military Assistance to Safety and Traffic (MAST) program.

It should be noted that all of these organizations are capable of night-vision goggle (NVG) all-weather operations.

eVTOL Takes Off
As readers of Vertiflite well know, there has been a rise in the development of electric vertical takeoff and landing (eVTOL) of urban air mobility (UAM) in the last few years. What started off with a dozen or so companies five years ago has become hundreds of small to medium start-ups, plus the traditional aerospace original equipment manufacturers (OEM), involved in this venture, as catalogued in the VFS World eVTOL Aircraft Directory (www.eVTOL.news/aircraft). Some two dozen companies are now flying prototype eVTOL aircraft.

The company’s latest all-electric aircraft is the VoloCity, a multicopter that carries two passengers and their personal luggage. It has a maximum gross weight of 1,985 lb (900 kg). First flight is expected soon.

The VoloDrone is a multicopter unmanned aerial system (UAS), which made its first tethered flight in October 2019. It has several applications ranging from agricultural missions such as seed sowing, forest management, etc., to logistics and heavy underslung load lifting. The VoloDrone can be utilized for the parapublic marketplace to provide surveillance or ferrying urgent supplies during times of disaster.

Volocopter is currently working with British firm Skyports to develop the vertical takeoff and landing infrastructure that will be used in large cities, which the company calls a VoloPort. Skyports designs and constructs vertiports for both cargo and passengers, while also specializing in drone deliveries. The VoloPort is available in three forms: on pontoons at the water’s edge, on a highway, or atop a skyscraper, similar to a rooftop helipad.

Volocopter is also developing the UAM software in conjunction with Lufthansa Industry Solutions, a subsidiary of the German national carrier Lufthansa. This is called VoloIQ and it provides real-time digital visualization of an UAM ecosystem, as well as serving as the nerve center for the air taxi service; it is critical to ensuring that the overall Volocopter UAM system works.

Volo Pair to the Rescue
In 2018, ADAC Luftrettung and Volocopter teamed up to conduct a feasibility study into the use of eVTOL vehicles in HEMS roles.

The ADAC Foundation — with the Institut für Notfallmedizin und Medizinmanagement (“Institute for Emergency Medicine and Medical Management”) at Ludwig Maximilian University in Munich — sponsored the research study. Computer simulations of various air medical missions were designed, covering two specific regions of Germany. More than 26,000 simulated multicopter operations were run, centered around the Ansbach area — with the eVTOL operating from bases at Dinkelsbühl — in Bavaria, and Idar-Oberstein in the Rhineland-Palatinate state to the west.

The results were published in a 132-page report in October (available in German or English at luftrettung.adac.de/volocopter), demonstrating that piloted multicopters could be an asset in providing rapid response. In December 2020, ADAC Luftrettung announced it was reserving two VoloCity eVTOL vehicles for operational testing in 2023.

According to ADAC, its own project team is dealing with the planning and preparation for pilot trials; it will start the testing in two model regions in Germany, though the specific locations haven’t been given. The multicopter operation will then be deployed to more areas in Germany, as there is a demand-oriented use of the system as an emergency doctor transport. As a result of their feasibility study, the assumption is that around 250 multicopters would be needed within Germany for the emergency doctor transport application.

A press spokesperson for ADAC Luftrettung also said, “before [these] trials, we will do several test flights and flight simulations in non-public areas. We need to simulate emergency medical service operations to test the performance of the eVTOL in such conditions. This will take its time until the described pilot trials in 2023, which will then lead into a system rollout planned in 2025.”

There are several technical aspects that need to be addressed when it comes to applying the multicopter to the HEMS mission. The multicopters will be mainly used for trans-vertiport-operation, so there will be a need to extend this operation to be able to land at emergency sites and in confined areas.

Another aspect is the range and speed optimization of the eVTOL and the fast efficient ground handling in the case of an emergency operation, and even flexible flight path planning, are all essential issues that need to be considered and especially where their operation differs to the typical UAM use case. As both Volocopter and the German Aerospace Center (DLR) are on board with this project, they are able to deal with these issues effectively.

Volocopter's cooperation with ADAC Luftrettung began in 2018 when they were approached with the idea to test the use of manned multicopters in emergency medical services — theoretically and in practice. The main question was “How can eVTOL aircraft can be used for medical professional transport?”

The 2018 study was on transporting emergency medical personnel and doctors to the patients, not the other way around, which is the conventional use of HEMS. The response times have increased over the last decades due to several factors, so ADAC Luftrettung is looking for ways to reduce response times and thereby save lives. The idea behind it was that bringing doctors to the patients would be a good place to start for improving emergency medical services with eVTOL technology.

Since the VoloCity, like Volocopter’s previous models, is a two-seat eVTOL aircraft, the multicopter would be strictly to transport a doctor — with basic equipment — to the scene as quickly as possible, while an ambulance (or helicopter) was en route for evacuation to a medical facility. The more quickly ADAC can get to their patients, the better they can enhance medical services within the critical “Golden Hour.”

One part of the study investigated the regulatory and legal aspects of using multicopters in air rescue and the conclusion was that any issues or problems that may arise would be easily overcome.

At present, Volocopter is working with EASA towards VoloCity gaining commercial certification for air taxi services and VoloDrone operations. The results of the ADAC study show air rescue with piloted multicopters like Volocopter’s is possible, makes practical and logical sense, and improves emergency care.

The Future is Electric
The eVTOL community, though young, is constantly evolving, and the industry is now turning towards how else to help the community.

The use low-cost, quick reaction UAM, such as what has been shown by the previous Volocopter-ADAC trials and which will no doubt be reinforced by the tests to come, is seen to complement — not replace — the rotorcraft currently in use.

Roads are becoming more congested, increasing the numbers of accidents. But in rural areas, where communities are further apart, there is only so much a traditional HEMS network can cover. Having significantly more aircraft that can more quickly transport medical personnel to the scene of an emergency will undoubtedly save more lives.

The author wishes to express a special thanks to the public affairs departments of ADAC Luftrettung and Volocopter.

About the Author
Ian Frain runs an aviation research consultancy in Cambridge, United Kingdom, called Helian. He has a BSc in engineering studies — aerospace and mechanical — from University of Hertfordshire, and has worked in offshore and parapublic helicopter maintenance, and as a researcher in an aviation publishing company. He can be reached at ian@hel-ian.eu.