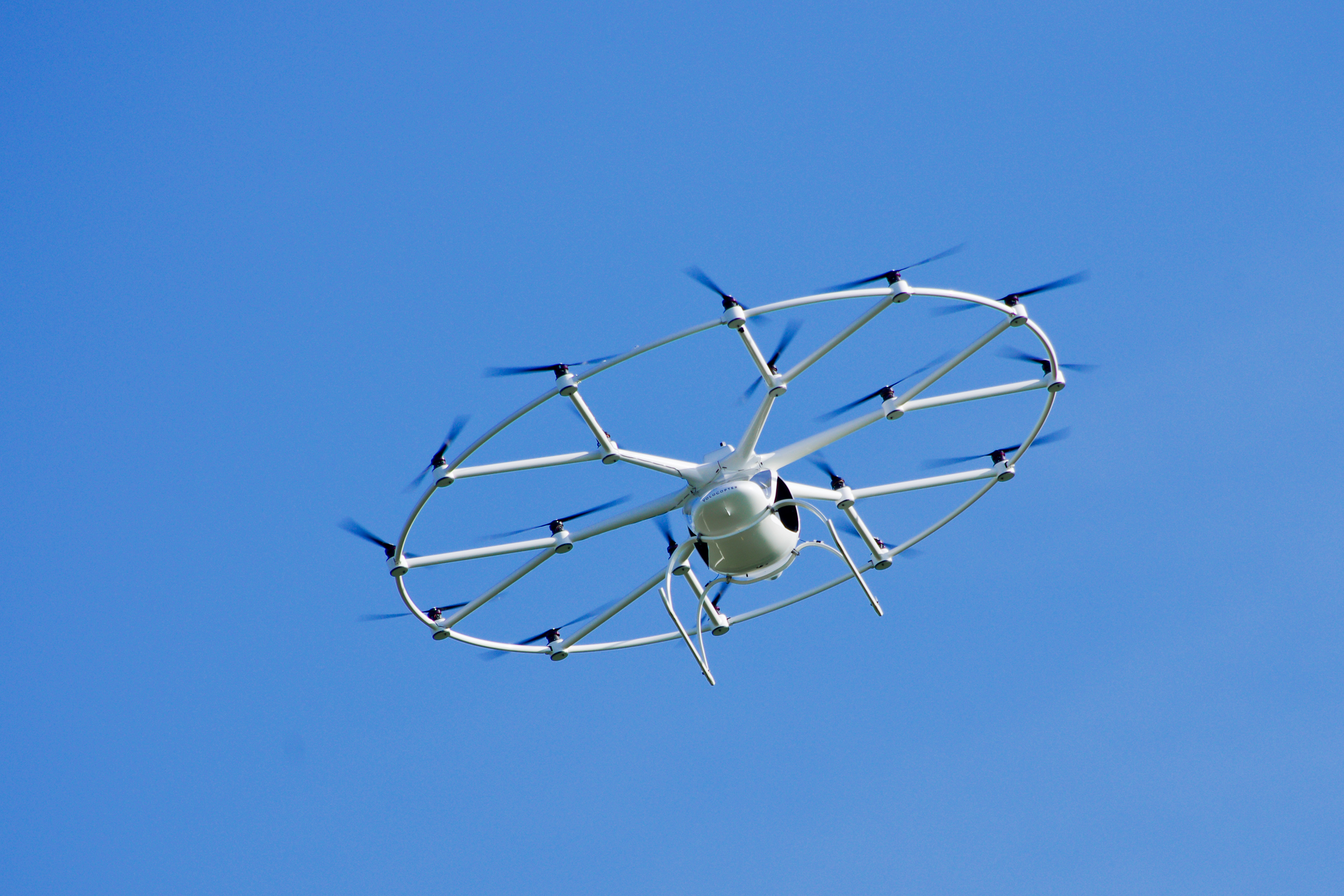 The German aerospace industry has enjoyed global success and recognition in design and innovation over the decades.

One prime example is the Airbus Helicopters-legacy Messerschmitt-Bölkow-Blohm (MBB) Bo 105 light, twin-engine helicopter. This had one of the world’s first rigid rotor designs, and formed the backbone of the parapublic marketplace globally for more than forty years — reaching a landmark eight million flight hours in 2014. To this day, it still remains in service worldwide, albeit in reduced numbers due to the introduction of newer types: the BK 117, H135 and H145, all of which are direct descendants of the Bo 105. Germany is also the worldwide composites center of excellence for Airbus Helicopters.

However, within the past several years, a series of new German-designed, light and ultralight vertical take-off and landing (VTOL) aircraft have been under development. Each of the designs discussed below is pushing one or more technical boundaries while seeking to reach the market as a next generation, low-cost vertical flight aircraft.

EDM Aerotec GmbH is located in Geisleden, in the state of Thuringia, part of the former East Germany. EDM Aerotec is a spin-off of Dreiling Maschinenbau GmbH — founded in 1982 as Engelbert Dreiling Maschinenbau (EDM) — which specializes in the construction and manufacturing of special machines, plants, mounting jigs, tools and milling heads, as well as design and manufacture of high precision parts for the automotive, aerospace and other industries.

Two date, EDM Aerotech has designed and built two prototypes of the CoAX 2D two-seat, all-composite, ultralight helicopter. The innovative craft has a coaxial, counter-rotating system with two blades each. The primary advantages of a coaxial rotor system are power and compactness — the counter-rotating rotors cancel out each other’s torque, eliminating the necessity and power drain of a tail rotor.

The initial construction of the first prototype — originally called “FLIP2” and then “CoAX” — took place in 2008 in Russia while the main development, manufacturing and completion were carried out in Germany. The first flight testing was also held in Russia, from September 2012 to August 2013, but when the results were assessed, the whole concept had to be revised.

Due to a lack of in-house expertise, the complex analysis of the aeromechanics, performance and loads of this rotorcraft was carried out by the Technical University of Munich (TUM). Further validation was provided by additional flight tests — conducted by partners EDM Aerotec, TUM and the German Aerospace Center (DLR) — including measurements of dynamic loads and optical measurements of the rotor blade path (e.g., to investigate blade tip clearance).

EDM Aerotec has been building up its fabrication, assembly and check-out facilities. Partner company Dreiling Maschinenbau is responsible for the development, construction and assembly of the rotor system, has also developed a purpose-designed assembly area and an instrumented rotor test stand for mast production and blade balancing. The company also built a third aircraft for simulated ground testing through a restraining stand (not unlike the Bölkow Bo 102 Helitrainer, in concept).

On the right is a family photo (left-to-right) of the CoAX 2D, the original CoAX and the training system. The CoAX 2D has much improved performance over the original design. (EDM Aerotec photo)

EDM Aerotec has also designed the CoNV 2D, a conventional helicopter with a single main rotor system and tail rotor. This is a dual structure design using the same airframe, hub and landing gear as the CoAX 2D, but substituting other conventional components such as a tail rotor, drive system and the standard main rotor head. There will also be provision for a twin-engine version.

However, as all the focus is currently on the development of the CoAX 2D, EDM Aerotec has not built a prototype of the CoNV 2D.

A young aeronautical engineer by the name of Bjorn Jung founded Youngcopter, a company located at Mainz-Finthen Airport (formerly Finthen Army Airfield operated by the US Army in Europe). Youngcopter is developing the neo, an ultralight helicopter kit with an all-composite airframe. Ground testing of the original prototype began in 2008, but first flight was not until November 7, 2011 — “After more than ten years of development” — as the developer overcame ground resonance and general issue with the developing of the airframe, propulsion, control system, and dynamic tuning of the rotors.

According to the company’s website, the “composite structure of the airframe is the central element holding together all other subassemblies,” and all of the neo’s 10 main airframe parts are manufactured in a single process.

A liquid-cooled, 180 hp (134-kW) rotary engine called the neosis is the heart of the helicopter. The engine uses unleaded automotive fuel and is fuel-injected.

In October 2011, e-volo GmbH conducted the 90-second first flight of its all-electric, 16-motor VC1 Volocopter, which gained global media attention. This innovative company was established in April 2010 after the owners and founders developed an interest in the quad copters appearing on the toy marketplace, especially on their ease of operation and control by people of all ages. The company then turned its attention to discovering how multicopter technology could be applied to manned flight. The whole ethos of the VC200 is one of an environmentally friendly, fun, safe and simple way to fly.

In the years after that first flight, Stephan Wolf and Alexander Zosel, two e-volo managing directors and co-founders, patented the Volocopter.

In 2012, the German Ministry of Transport subsidized the company’s development of a two-seat VTOL aircraft within a 36-month timeframe. One year later, in September 2013, the company unveiled the VC200 in Berlin. The event consisted of floating the prototype inside the arena, tethered to a stanchion above the audience. Two months later, the first maiden flight of the VC200 took place inside the DM Arena in Karlsruhe, on November 17. This time, several flights lasting just a few minutes each, took place.

In 2015, a number of things happened, including the manufacturing of the VC200’s electrical system consisting of a high-redundancy optical data network. This meant that the electronic components in the VC200 could talk with each other. Finally, in November, the 18-propeller VC200 completed a successful flight-test program after the final system components were installed.

The program successes included: the first use of a joystick in controlling the VC200, thus demonstrating its ease of operation; use of a 120-kg (265-lb) weight during the tests in simulating the weight of a pilot; and flying the VC200 in an optimized state with automated adjustment of height and position operation, thus successfully ensuring a safe hands off operation during flight.

The VC200 conducted more than 100 unmanned test flights, which included a number of exercises and tests. These included simulated component failures and airframe stress tests, and were all carried out under remote control. Last but not least, the tests also included shutting down the batteries, electronic motors and flight control units while airborne. The 450-kg (990-lb) VC200 also conducted bad weather testing, including flights in turbulent conditions.

Safety was demonstrated by showing that if more than one motor fails, the aircraft can still continue to fly and land: a full aircraft parachute is also included, controlling descent in the unlikely event of an emergency.

All this rigorous testing led to the German Aviation Authority approving the company to conduct flights within German airspace, issuing a ‘permit to fly’ for the VC200 in February 2016, and assigning a German civilian registration, D-MYVC (“My VoloCopter”). This made it the first certified multicopter.

The company is also studying concepts for the single-seat VC100 and the four-seat VC400, as well as unmanned derivatives of each.

On the outskirts of Munich is the small town of Gilching, the home of Lilium Aviation — the innovators behind what they hope will become the world’s first electric-powered VTOL jet. The company’s staff of aerospace engineers and product designers from TUM contributes a wide range of expertise including knowledge of aerodynamics, robotics and structural composites.

The titular Lilium Jet is a two-seat aircraft intended to fly at a cruising speed of 300 km/h (160 kt) with a payload of 200 kg (440 lb); maximum speed is 400 km/h (240 kt). The aircraft has a maximum takeoff weight of 640 kg (1,410 lb) thus falling into the Light Sport Aircraft category, and so can be operated by a holder of a Sports Pilots License. The company says their aircraft will be rolled out in January 2018.

Little has been revealed about the concept, but artist’s depictions show a total of 36 electric fans: 12 on the upper surface of each wing and two rows of three fans on each canards, which are retracted in cruise flight. Both the canards and the wing fans can tilt beyond 90 degrees for vertical flight. The company also indicates that the wings could fold forward to allow the aircraft to be driven like a car, and recharge overnight from a standard residential electrical outlet.

The company was founded in 2015 by four aerospace engineers and product designers from the Technical University of Munich in Germany. It has received funding from the European Space Agency and the European Union’s Climate-KIC program, Europe’s largest public-private innovation partnership focused on climate innovation to mitigate and adapt to climate change.

To date, Lilium has flown “several” small scale demonstrators, on the order of 25 kg (55 lb), at Special Airport Oberpfaffenhofen, next to the company’s development site. Lilium plans to fly a full-sized unmanned testbed by the end of this year.

All in all, the German technological revolution demonstrates great ingenuity and out-of-the- box thinking. Most importantly, in this current climate there is a heavy emphasis on minimizing the effects of technology on the environment, as well as on enhancing safety of flight.

The future of the aerospace industry looks bright in the hands of these small innovative and inventive companies.

Ian Frain runs an aviation research consultancy in Cambridge, United Kingdom, called Helian. He has a BSc in engineering studies — aerospace and mechanical — from the University of Hertfordshire, and has worked in offshore and parapublic helicopter maintenance, and as a researcher in an aviation publishing company.

He can be reached at ian@hel-ian.eu.