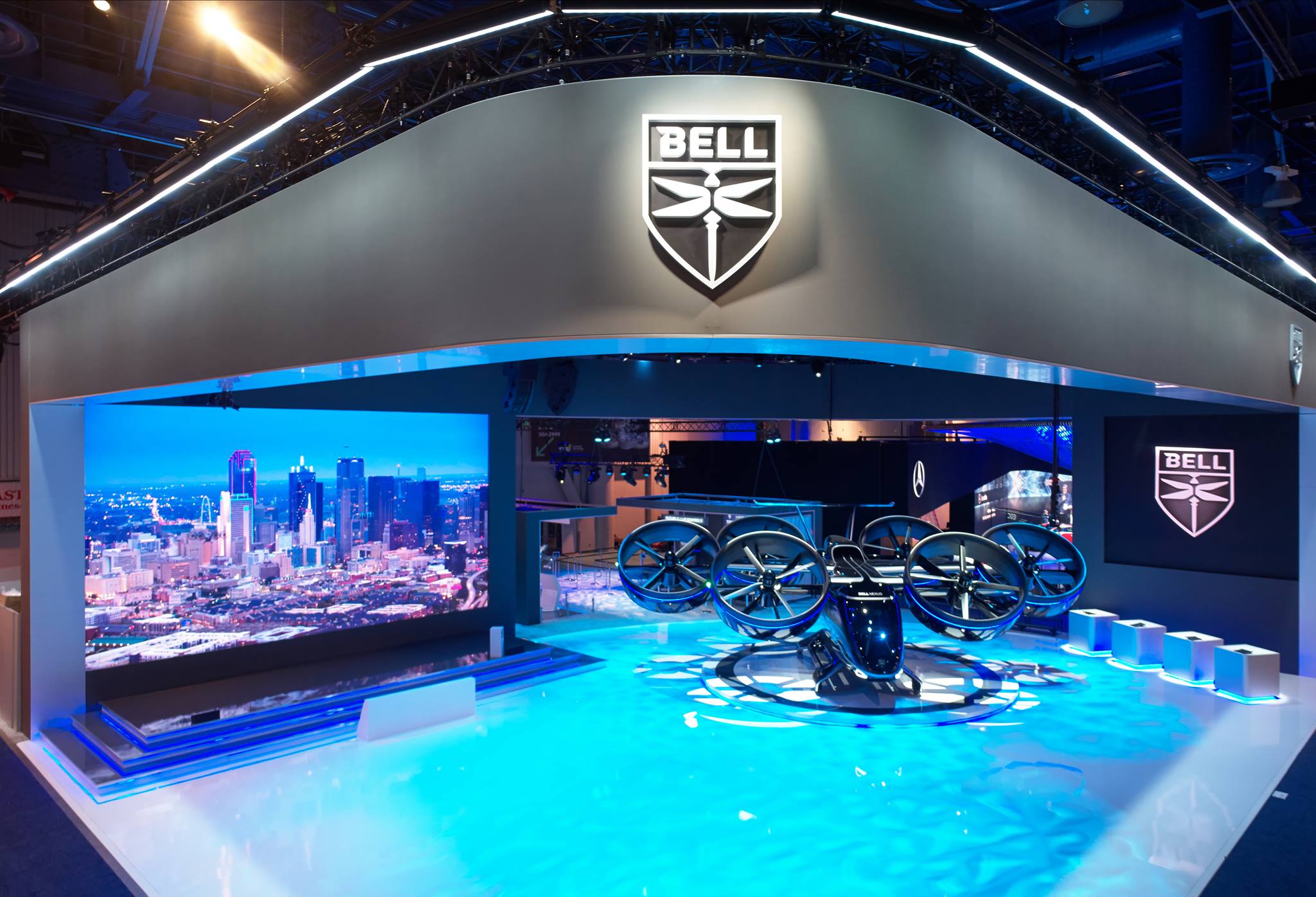 eVTOL Captures the Attention of CES

Electric VTOL and urban air mobility developers are reaching out to the consumer
to create demand and prepare the way for public acceptance.

The Consumer Electronics Show (CES), the world’s largest assembly of the latest and greatest consumer technology from around the world — from phones and TVs, to drones, cars and, yes, even electric vertical takeoff and landing (eVTOL) aircraft and a yacht — kicked off in Las Vegas, Nevada, on Jan. 8–11, 2019.

The buzz for CES 2019 was about eVTOLs. The darling of the show was the Bell Nexus, highlighted in the CES 2019 daily news. The Nexus wasn’t the only eVTOL on display, but it was the most visible.

Traversing the CES show floor, there were several projects at various levels of maturity. Among them were the Hoversurf hoverbikes on display in the South Hall. The Hoversurf Scorpion-3 is currently being tested in Dubai by the police force. This fourpropeller machine was powered up several times during the show, although it didn’t fly inside the convention center. The controls are a mix of battle tank and flight control joysticks. While it appears to ride like a speed bike (aka, a “crotch rocket”), the Scorpion and its various antecedents, has conducted extensive flights and is well on the way to active use. In September, the Hoversurf Formula became the third eVTOL that has been acknowledged by the US Federal Aviation Authority (FAA) as a Part 103 ultralight, meaning the vehicle weighs 254 lb (115 kg) or less and can be flown without a pilot’s license, but Hoversurf requires the owner go through a training program.

Hoversurf also unveiled their next-generation hoverbike, which features six ducted-propellers — instead of open props — to protect the pilots from blade-strike injuries. The Hoversurf team didn’t reveal much about this vehicle; in fact they kept it under wraps for much of the time and did not reveal a designation or model number.

Hoversurf was not the only hoverbike on display; the ElectraFly was also on display. The ElectraFly is also a sit-on bike, albeit the propulsion is configured somewhat differently. This bike has dual propellers mounted on the end of the wings. ElectraFly was coexhibiting with Deseret Unmanned Aerial Systems (UAS) Flight Test Ranges, where the bike will undergo flight testing.

VFS corporate member NFT, Inc., also presented its vision for a fully-electric VTOL drive-and-fly vehicle. Although it did not reveal the details of the concept, NFT has been teasing images since last year.

In addition to these exhibits, the Consumer Technology Association also assembled some interesting conference sessions on mobility and transportation at CES 2019.

“Flying Taxis. Build Them, But Will They Come?”

The CES session, “Flying Taxis. Build Them, But Will They Come?,” featured some big names in the eVTOL landscape — Uber and EmbraerX. This session, a Deloitte-organized panel discussing urban air mobility (UAM), focused on air taxis and their place in the UAM future. The panel featured Tom Prevot of Uber Elevate; David Rottblatt of EmbraerX; Julia Richman, the chief information officer of the City of Boulder, Colorado; and Robin Lineberger and Chris Metts of Deloitte.

During this first-ever panel discussion on eVTOL at CES, held on Monday, Jan. 7, the question was asked about what has changed that makes this discussion relevant at this time. Helicopters have been around for many years and have not been accepted as a local taxi service for various reasons, including noise and cost. Prevot suggested that these new concepts enable designs that were not feasible with a classic single/dual engine design. The use of electric motors allows redundant designs, manages weight distribution, mitigates noise and enables aero-efficient designs for longer-distance travel.

Helicopters have struggled to gain social acceptance but distributed electric propulsion designs are expected to be much quieter. Electric drives also reduce the maintenance requirements and overall operating costs, and they allow for the distribution of the propulsion systems outside the center of the vehicle to create more inviting passenger space. Ultimately, Prevot indicated that rapid scaling will be important to achieve affordability. A modernized air traffic management system for urban air mobility — and especially for unmanned systems — requires new management approaches.

Rottblatt took a different view of the progress being achieved. He suggested that the maturation of higher-density batteries, power electronics and rotating machines have really enabled the development of purpose-built vehicles — not just air vehicles, but all vehicles. Decoupling of the power source from the delivery mechanism frees designers to consider architectures based on design priorities, such as noise mitigation, takeoff efficiency and cruise efficiency. While noise is a consideration, there are many other issues that each individual city may cite that will need to be addressed, and this may lead to a vehicles tailored for specific. If efficiency is the priority, designs that optimize around fuel or electric consumption can be prioritized. Finally, Rottblatt remarked that, “one day, driving will be a novel thing again.”

The discussion then turned to ridesharing and what the vision for these vehicle markets will be. Prevot was very clear that the Uber vehicles will be targeted at a fleet-ownership model, not individual ownership. The sell price combined with the operating costs and insurance will put individual ownership at a disadvantage. In addition, some form of pilot’s license will likely be required to operate these vehicles. Richman described her daily commute from Denver to Boulder, which is remarkably like many typical commutes, and commented that adding the air taxi solves the overall speed of the commute but not the last mile problem. Therefore, a combination of mass transport, ride-share, and air taxi makes great sense and would be welcomed by many, although her expectation is that it would not necessarily be a daily option, but an on-demand option.

Chris Metts of Deloitte highlighted that the US Federal Aviation Administration (FAA) cultural norms around piloting need to change and modernize, especially with the significant improvement in controls that allow for less-skilled pilots. He highlighted the environmental benefits from the technology, such as reduced ground congestion. He also pointed out that rural environments would benefit from vehicles in this class for traveling to difficult-to-access areas, or for commercial use in powerline, pipeline, railway and bridge inspections. There needs to be a parallel with how the commercial unmanned system programs and traffic management have been implemented.

Ultimately, as EmbraerX emphasized, the stakeholders of each application must be involved from the very beginning or the risk of failure will increase. Government and private stakeholders must have the commitment to succeed, and they must drive requirements and solutions rather than simply relying on eVTOL manufacturers to provide solutions. A great example is airspace. Currently, FAA-controlled airspace focuses on commercial transport and provides provisions for general, business, unmanned and agricultural aviation outside of the tightly controlled rules-based areas. By the time urban air mobility becomes viable and begins to scale, air traffic managers must already have anticipated the new challenges it will present — such as having to manage the intersection of ground and air traffic — and new rules and processes must be in place to ensure its success. How will we manage the intersection of the ground and air traffic?

The NASA UAS Traffic Management (UTM) project has proven very effective in managing large numbers of vehicles and it can be scaled to handle the expected traffic for many years. The industry and its associations are working to incorporate this technology with the FAA. Their expectation is that the FAA will continue to manage the lower airspace and will continue to rely on technology and pilots to follow the guidelines to maintain the safety levels required. Implementation of the UTM algorithms are anticipated to facilitate this traffic.

For the Uber Elevate model, all decisions will still be made on the ground prior to the actual flight. Of course, contingencies will be provided to ensure safe routing and delivery. In the beginning, pilots will oversee each flight, and trip data will be collected to validate the system’s operation and optimize future flights. Ultimately, these data will be used to enable pilot-less travel. Uber does not expect to make step-changes with the Elevate model, but rather a phased-approach, where levels of automation are increased only when a certain amount of trust in the systems has been established. Uber emphasized that it has full commitment to this program from its top leadership and will work with each stakeholder to ensure the safety and efficiency of each flight.

While there are still some significant challenges to solve, eVTOL “ flying taxis” are being built and people will use them in the promising future of urban air mobility.

“The Future of Transportation”

Early in the discussion, Poliak pointed out that automobile manufacturers are now rebranding themselves as mobility companies. With Ford adding Argo, Chariot, Spin, and TransLoc, and GM adding Cruise Automation and Strobe, as well as investing in Lyft and Maven, it is clear that making automobiles is just not enough. The experience of the trip is more important to many consumers than their passion for car ownership, and automotive companies understand that they must keep evolving with the times. With increased migration to cities, more people are forgoing automobile ownership in favor of ride-sharing and last-mile options in conjunction with mass transit.

Sengupta highlighted that the younger generation is more attuned to environmental issues, and generally less financially able to or interested in owning a vehicle. Many people recognize the personal freedom a vehicle provides, but also recognize the costs involved with operations, payments, insurance, regular maintenance, parking and tolls.

The future of transportation includes automobiles and mass transit, but more types of transportation are being conceived and built, including air taxis, hyperloops and automated vehicles of all sizes and shapes. The largest obstacles in gaining acceptance for these new modes are not only regulatory certification, but social acceptance. Thacker said, “Public acceptance of technology is critical, and not only that but the technology must be accessible.”

So, what happens to our current forms of mass transportation — buses and rail — when customized, door-to-door mobility-asa- service (MaaS) becomes commonplace? They will still have a place if municipalities keep them current, relevant and optimized.

If there was anything to learn from this panel, it is that the future of transportation will be very different from 2019 and it will be very efficient — and yet cool.

Jim Sherman is an electrical engineer at SAE International, where he is a technical conference developer. He previously held engineering positions with BAE Systems, IBM, Lockheed Martin and General Electric. He holds Master of Electrical Engineering and Master of Business Administration degrees from Binghamton University.