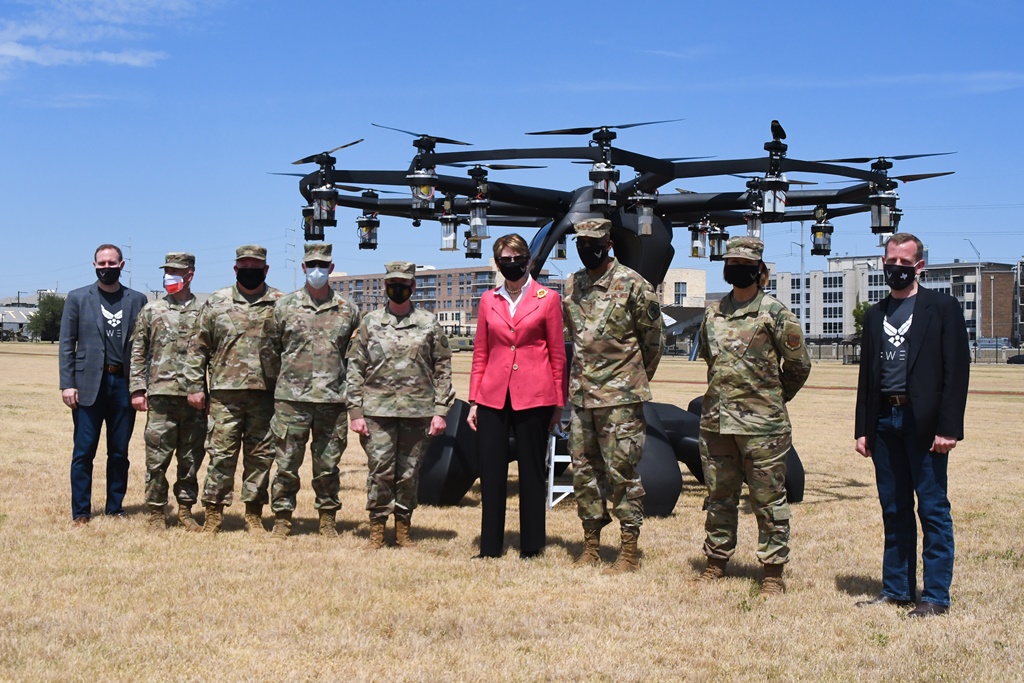 LIFT Aircraft’s HEXA Gets a Boost

The senior leadership of the United States Air Force witnessed their first flight of an electric powered VTOL aircraft on Thursday, Aug. 20, 2020, when LIFT Aircraft gave a demonstration of its single-seat HEXA aircraft on the parade ground of Camp Mabry near downtown Austin, Texas. The “Electric VTOL Revolution” has been underway for a decade, but very few members of the US military have even seen a manned eVTOL aircraft fly.

The senior leadership were in town visiting the local branch of AFWERX, the Air Force’s innovation hub, which officially launched the Agility Prime initiative on April 28, “to accelerate the commercial market for advanced air mobility vehicles,” which members of the service like to call “flying cars” or “orbs.”

Matt Chasen, founder and CEO of LIFT Aircraft, said he received a call about a week earlier inviting him to perform a demo flight at Camp Mabry. The aircraft arrived at the base a few days early to make some practice flights.

The entourage watched the four-minute flight demo from the parade ground viewing stands in close to 100 °F (37 °C) temperatures and were then invited to inspect the aircraft.

“The Secretary of the Air Force [who is an instrument-rated pilot] and the Chief of Staff [an F-16 pilot] both sat in the aircraft and I gave them a little bit of an overview and they congratulated us on our progress and the work with the Air Force,” said Chasen

“This was the first flight demonstration that we've had with Agility Prime,” explained Col. Nathan Diller, Director of AFWERX and the leader of the Agility Prime initiative, which now has established business relations with 15 different companies across three different eVTOL aircraft categories: 1-2 seats; 3-8 seats and/or cargo; and large unmanned cargo greater than 1,320 lb (603 kg) gross takeoff weight. More can be read about the demonstration at (evtol.news/news/usaf-leadership-gets-evtol-demo).

LIFT Aircraft announced the 18-rotor ultralight HEXA on Dec. 10, 2018 along with plans to let thrill-seekers experience a 10 to 15-minute flight — without a pilot’s licence — and soon thereafter invited people to join a waitlist for flights in 25 US cities.

LIFT was founded by Chasen, a serial entrepreneur, investor and adventure sports enthusiast in 2017. While getting his MBA at the University of Texas at Austin in 2003, Chasen founded uShip — the first and largest online marketplace for shipping which had over $200M in annual gross sales by 2019.

Chasen teamed up with engineering consultant Balazs Kerulo, who was previously the CEO and chief engineer at ByeGravity cPlc., which developed the FLIKE Flying Motorbike. The single-seat electric-powered ‘tricopter’ with three coaxial rotors made its first manned flight on March 7, 2015 in Hungary.

The first photos released of the prototype HEXA featured the aircraft a large central float under the open cockpit and four floats on outrigger arms to allow it to land smoothly on the water. The US Federal Aviation Administration (FAA) Part 103 regulation limits powered ultralight aircraft to a maximum weight of 254 lb (115 kg), but designers are free to add floats and other safety equipment without a weight penalty. The rules allow an additional 30 lb (13.7 kg) for each float and for a 28 lb (12.7 kg) ballistic parachute system, giving the aircraft an empty weight of 432 lb (196 kg).

The latest iteration of the HEXA flown at Camp Mabry featured six outer floats for redundancy and better stability, with no change to the aircraft empty weight.

LIFT is in the midst of a three-phase flight test program using three preproduction aircraft, with two based at Rusty Allen Airport northwest of Austin and the third near Budapest, Hungary.

“Phase One for us is really all about basic safety and flight control,” said Chasen. “These things take a lot of time. You go step by step and we've tested all the redundancies in safety features that we have on the aircraft except our ballistic parachute that'll be [tested] in Phase Two,” since current tests are limited to a maximum of 50 ft (15 m) above ground level (AGL).

“I think we're at close to 600 flights and probably between 10- and 15-hours total, with many of our flights just a couple of minutes to test certain aspects of the system,” said Chasen.

“It's a great benefit that you can fly unmanned and remotely controlled, and actively reduce the risk of a traditional manned aircraft flight test program. Between a third and a half of our tests have been with a pilot onboard. We basically run through each test procedure to the extent we can unmanned. And then once we're comfortable putting the human on board, we put the pilot in the loop. We have four pilots who have flown the aircraft at different stages,” he added.

The five new production aircraft are now under construction, with two to be allocated to Air Force flight test and evaluation activities.

LIFT recently selected a Tier 1 composite manufacturer to support series production, but Chasen said further details will be released at a later date.

Earlier this year, LIFT was selected to receive a Small Business Innovation Research (SBIR) grant by Agility Prime, so the demo was also a celebration of a recent contract signing. “This partnership will help us advance flight testing, airworthiness & safety, and ultimately, certification. This means accelerating progress not only toward the tour via safety testing, but also expanding HEXA's flight envelope: faster, higher, stretching the aircraft's limits,” said LIFT in a statement in April.

Chasen said LIFT is now contracted to do further development and flight testing in conjunction with the Air Force, “with the aim of evaluating our aircraft against the airworthiness certification requirements the DOD has for their aircraft.”

Beyond the technology and performance, the Air Force will be working to identify suitable applications for the HEXA within the service. Chasen said that the Air Force has taken a smart approach to working with innovative companies, because, “we're moving much, much faster and we'll be iterating much faster than traditional developments in aerospace. There's just so much changing all the time.”

When the FAA published its Advisory Circular for Federal Aviation Regulation (FAR) 103 “The Ultralight Vehicle” in January 1984, the document specified that ultralight aircraft could only be flown for sport or recreational use, with a couple of exceptions.

One of these exceptions allows local, state, or federal government entities to operate ultralight as “public aircraft" on a much wider range of missions“ in accordance with the applicable operating and flight rules of Part 91,” which covers the operation of small non-commercial aircraft.

This means that the Air Force (or any other agency) can employ the HEXA on a wide range of missions not originally considered when LIFT launched the program.

Earlier this year, LIFT teamed up with researchers at the University of Texas to propose a Small Business Technology Transfer (STTR) Phase 1 contract to explore the use of a derivative of the HEXA in a medivac or air ambulance role with a stretcher mounted under the pilot’s position.

One scenario saw a HEXA with an emergency medical technician (EMT) onboard to reach a patient. Then, after triage, the patient would be flown remotely or autonomously to a hospital for urgent care while the EMT remained behind to comply with the single occupant rules for FAR 103 ultralight aircraft.

Chasen said a fourth phase could be added to the flight test program if, for example, the Air Force wanted to expand the flight envelope, which is currently restricted by regulation to 55 kt (102 km/h).

Or if the Air Force wanted to extend range to distances, “which are above and beyond what we can achieve with the weight limits of Part 103,” which could lead to, “adding a hybrid generating capability … or exploring other opportunities for range extension,” said Chasen.

LIFT’s plans include a 25-city US tour where members of the public, with and without pilot’s licenses, could fly the HEXA after a few hours of VR training. More than 15,000 people have registered to fly the aircraft, but the start date was pushed back by the coronavirus pandemic and more recently by 14-day isolation orders some cities have placed on visitors.

Chasen hopes to start hiring people later this year to support a 12- to 18-month tour program across the US as well as for year-round sites for its new experiential entertainment business. One advantage of the COVID-19 delay is that the aircraft continues to mature which enhances safety.

(All photos courtesy of LIFT Aircraft)

We signed up and paid for a demo flight. Is it going to happen or should we get our money back?

Yes, they are going to happen. They are shut down because of COVID-19 restrictions. See the last paragraphs above. I bought a ticket too!

These folks are cruisin’ for a bruisin’ in trying to fly this thing under Part 103. Any field inspector could decide that the questionable assumptions they’ve made on allowable weight of float and parachute systems is wrong, and just ground the thing. Would be far better, and more professional, to license the first few as Experimentals and then to have any production items be registered as Light Sport Aircraft (LSA.) Dinking around by saying “Oh, it’s an ultralight” is rather amateurish.