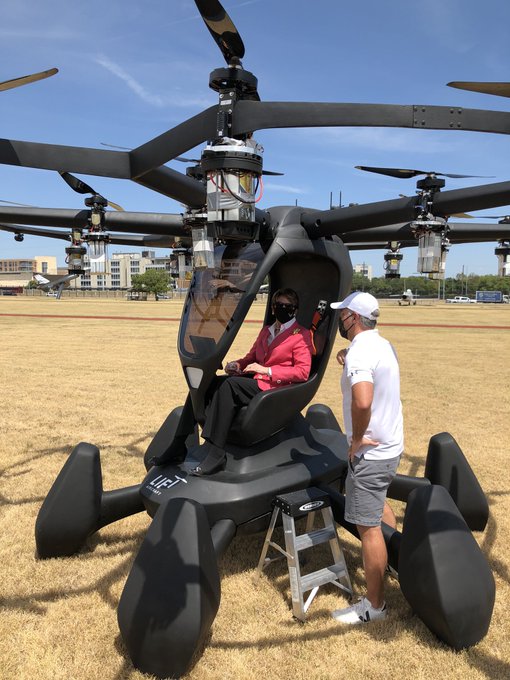 On Aug. 20, 2020, the three top leaders of the United States Air Force had their first opportunity to see an electric powered vertical takeoff and landing (eVTOL) aircraft in flight during a visit to headquarters of the Air Force’s innovation hub, AFWERX, in Austin, Texas.

The single-seat HEXA eVTOL ultralight was piloted by Matt Chasen — founder and CEO at LIFT Aircraft, Inc. — who gave a four-minute demonstration that included hovers, turns and forward flights while the aircraft remained within 40 ft (12 m) of the ground. The air temperature at the time was close to 100 °F (37 °C).

After the flight, the Air Force leaders were able to inspect the aircraft and sit in the cockpit. The HEXA is powered by 18 independent overhead electric motors and propellers, with six floats that allow the aircraft to operate from water. The photo shows Secretary Barrett seated in the aircraft with Chasen explaining the HEXA.

The visit to Austin was the first combined chance for the leadership to visit airmen in the field since Gen Brown and Chief Bass were sworn earlier this month.

The visit to AFWERX was hosted by its director, Col. Nathan Diller, who also leads the Air Force’s Agility Prime initiative which was officially kicked off with a virtual launch in April to support the rapid commercialization of the American eVTOL industry and identify innovative use cases for these aircraft (or “Orbs,” as they call them) within the Air Force, working closely with industry.

LIFT Aircraft was publicly launched in December 2018 to bring the HEXA multi-rotor FAA Part 103 ultralight aircraft to market, with the first unmanned flight taking place in May 2018, and the first manned flight in November 2018.

LIFT’s plans include a 25-city US tour where members of the public — with and without pilot’s licenses — could fly the HEXA after a few hours of training. More than 15,000 people have registered to fly the aircraft, but the start date was pushed back by the coronavirus pandemic. Three prototypes are currently flying, with based two in the US and a third near Budapest, Hungary, where LIFT has a research facility.