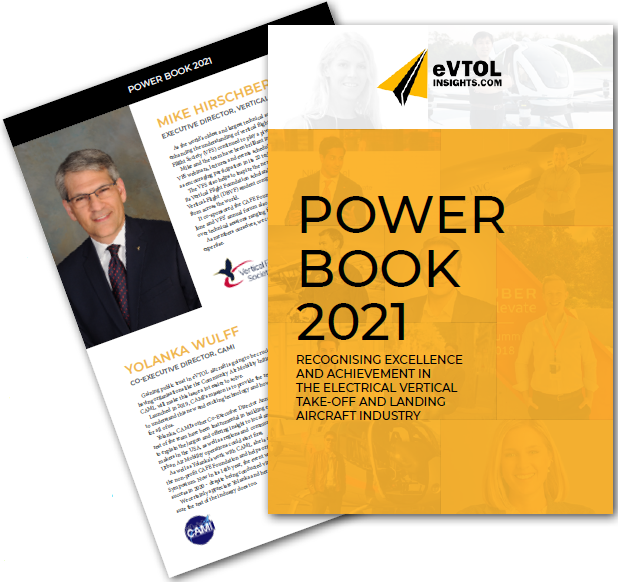 eVTOL Insights Recognizes Hirschberg and 20 Others

The website eVTOL Insights published its “Power Book” in January, its “definitive list of the influencers, innovators and leaders from the last 12 months.” The intent is to recognize excellence and achievement in the electric vertical takeoff and landing (eVTOL) industry. To be released every year, the Power Book 2021 “recognizes 21 of the industry’s brightest individuals from across the world and their company’s achievements in 2020.”

One of those recognized was VFS Executive Director, Mike Hirschberg. The citation for Hirschberg in the Power Book was:

As the world’s oldest and largest technical society dedicated to enhancing the understanding of vertical flight technology, the Vertical Flight Society (VFS) continued to play a pivotal role in 2020. Mike and the team have been brilliant in informing members about VFS webinars, lectures and events scheduled throughout the year, as well as encouraging participation in its 22 technical committees. The VFS also helps to inspire the next generation of engineers, with its Vertical Flight Foundation scholarships and inaugural Design-Build-Vertical-Flight (DBVF) student competition, which has attracted teams from across the world. It co-sponsored the CAFE Foundation’s Electric Aircraft Symposium in June and VFS’ Annual Forum also saw more than 1,000 attendees connect over technical sessions ranging from Acoustics to Unmanned Systems. As members ourselves, we certainly value their continued support and expertise.

The other 20 recipients of this year’s recognition were:

All of the recipients are VFS members except for Mr. Hu Huazhi from EHang.

Announcing the first Power Book, Simon Corbett, Founder of eVTOL Insights, said: “eVTOL Insights was launched in early 2020 with the aim of becoming the leading source of news, information and analysis into the global electric vertical take-off and landing aircraft market.”

The 5,500-word Power Book can be downloaded at www.eVTOLinsights.com. VFS joins eVTOL Insights in recognizing the accomplishments of our members and all of the honorees.